Ocean fish are a vital renewable resource for human populations, providing food, employment, and recreation. Many fish stocks worldwide, however, are in a state of serious decline due to overfishing, environmental degradation, climate change, and other stressors. Fishing effort worldwide has remained relatively constant with only slight increases recorded, while the global production of marine fisheries has decreased (Food and Agriculture Organization of the United Nations, 2010).

The South Atlantic and Gulf of Mexico regions of the United States have witnessed significant declines in fish stocks that are important to recreational and commercial fisheries. As of 2011, nine fish populations across the two regions were officially classified as “overfished.” An additional 12 populations were classified as “subject to overfishing.” Biological overfishing occurs when harvest rates from fishing exceed the growth rates of fish stocks. The resulting declines in fish populations can impact the economy at large. 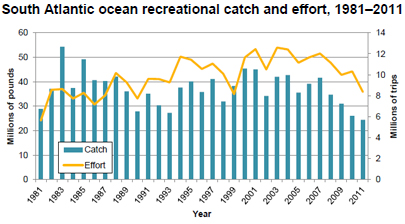 This study examines an important component of the costs of overfishing in the South Atlantic and Gulf of Mexico regions — recreational catch losses from historic overfishing and their associated economic impacts. Our analysis covers nine federally managed overfished stocks in these two regions over the period 2005–2009, the most recent years for which the necessary data were available prior to the 2010 Deepwater Horizon oil spill in the Gulf. Those stocks are black sea bass, red grouper, red porgy, red snapper, and snowy grouper in the South Atlantic; and gag, gray triggerfish, greater amberjack, and red snapper in the Gulf of Mexico.