There's an old saying that a penny saved is a penny earned. This sound financial advice is equally true for management of U.S. ocean fish resources.  As I've said before, conserving our ocean fish populations is a prudent economic investment. The converse is also true: Overfishing is bad economic policy.

Last year, Ecotrust, an Oregon-based economic public policy organization, released a study that estimated that in 2009, commercial fishermen in the South Atlantic and Gulf of Mexico targeting depleted fish populations lost $15.2 million because of decades of overfishing.

Now, in a new report commissioned by the Pew Environment Group, Ecotrust has analyzed the recreational fishing sector's economic losses associated with historic overfishing, focusing on severely depleted species in the South Atlantic and Gulf of Mexico. 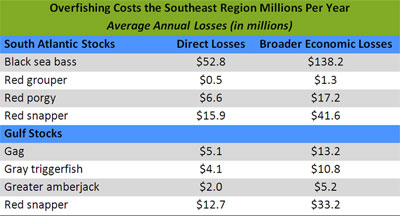 Annual economic losses were calculated by examining recent average annual trip expenditures directly related to recreational fishing for the period 2005 to 2009 and comparing them with potential expenditures if the fish populations had been at safe levels. In addition to estimating direct losses, Ecotrust also calculated losses to the broader economy, including spending at hotels, restaurants, wholesale businesses that supply the recreational fishing industry, and other downstream businesses.1 (Note: The results of the two studies cannot be compared, because the methodologies are fundamentally different. See endnote for explanation.)

The short-term economic losses to fishermen from management regulations implemented to restore depleted fish populations, often appear in press coverage. But Ecotrust's study shows the other side: the broader economic cost of mismanagement of our ocean fish resources. And as the chart above illustrates, direct losses have a ripple effect on businesses such as restaurants and hotels that benefit from recreational fishing. For example, reduced fishing trips for South Atlantic black sea bass, a species that has experienced decades of overfishing, resulted in an average direct annual loss of nearly $53 million and a whopping $138 million in broader losses. 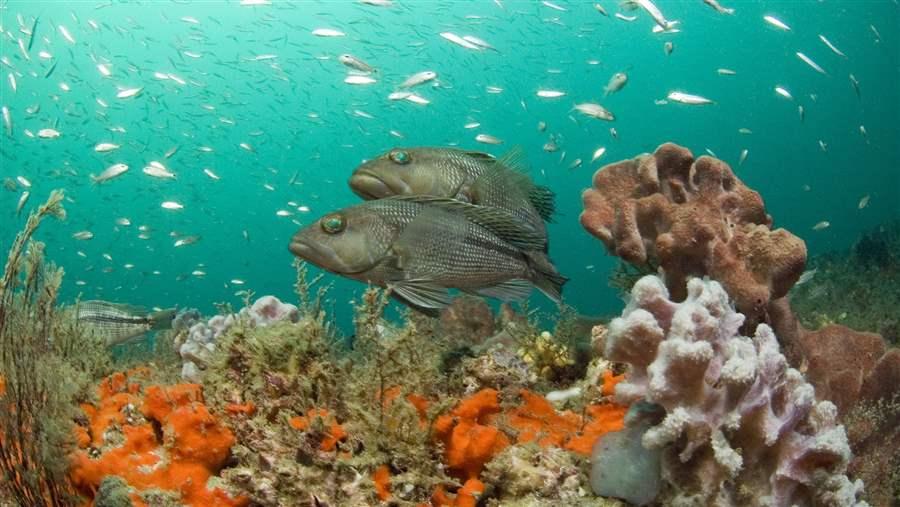 After decades of overfishing, black sea bass in the South Atlantic are recovering.

The good news is that these losses need not be permanent. With effective management that prevents overfishing, depleted fish populations can be rebuilt, adding tens of millions of dollars to local economies. Ecotrust's study makes a strong economic case for the Magnuson-Stevens Fishery Conservation and Management Act's conservation provisions, which prohibit overfishing and require rebuilding of depleted species.

Conserving our valuable fish populations is like saving money in an interest-bearing account.  A fish saved is much more than a penny earned. As fish populations rebuild, they deliver jobs and income, support anglers, boost commercial fisheries, and improve the health of ecosystems in the South Atlantic and Gulf regions that draw fishermen, divers, and tourists from around the world.

This article originally ran at HuffingtonPost.com

1The commercial analysis estimated the value of commercial landings that could have been realized had fish stocks not been subject to overfishing. To estimate this value, Ecotrust used actual 2009 ex-vessel prices per pound landed and compared the total value of landings to what fishermen could have earned had these species been at healthy levels. Further, the findings from the commercial analysis did not account for forgone benefits from other potential economic activity in industries related to commercial fishing, such as bait and tackle shops, commercial processing, and seafood retail. The recreational analysis did account for broader economic impacts.