A new analysis by the Pew Environment Group, Navigating Global Shark Conservation Measures: Current Measures and Gaps, compiles existing management measures for sharks, highlights their inadequacies, and makes recommendations for improvements. The following is a summary of that analysis.

Sharks have been swimming the world's oceans for more than 400 million years. But today, shark populations are in trouble globally. Life history characteristics, such as slow growth, late maturation, and production of few offspring, make sharks vulnerable to overfishing and slow to recover from decline. The International Union for Conservation of Nature (IUCN) Red List of Threatened Species has assessed the extinction risk of 480 species of sharks from around the world. Forty-three percent (209 species) are data deficient. More than half of those with enough information to determine their conservation status (150 species) are threatened or near threatened with extinction. The loss of sharks could cause irreversible damage to the ocean, as sharks play an important role in maintaining balance in the marine environment.

Fishing to Supply a Global Market

Shark fishing occurs around the globe, but little is known about the magnitude of the fishing or the catch. Evidence shows that actual global catch of sharks may be three to four times higher than the official statistics reported by the Food and Agriculture Organization of the United Nations (FAO).

Shark fishing globally is largely driven by the demand for shark fins. Hong Kong, the world's largest shark fin market, represents approximately 50 percent of the global trade. According to trade data from the Census and Statistics Department of Hong Kong, 83 countries exported more than 10.3 million kilograms (22.7 million pounds) of shark fin products to Hong Kong in 2011.7 With shark fishing countries from around the world supplying fins to the Hong Kong market, effective shark management must be global, including all areas where sharks are caught.

On the regional level, regional fisheries management organizations (RFMOs) should play a critical role in regulating fishing for certain highly migratory and straddling stock species, including sharks, to ensure that relevant fisheries are sustainable.

Countries, territories, and other political entities can take action to manage and conserve sharks in their waters. Some countries have passed laws or put in place regulations that prohibit commercial fishing of all sharks throughout their exclusive economic zone, creating a shark sanctuary. Other domestic measures include banning the sale, trade, and possession of shark parts, prohibiting shark finning, putting in place catch quotas, prohibiting retention of vulnerable species, and establishing gear restrictions. 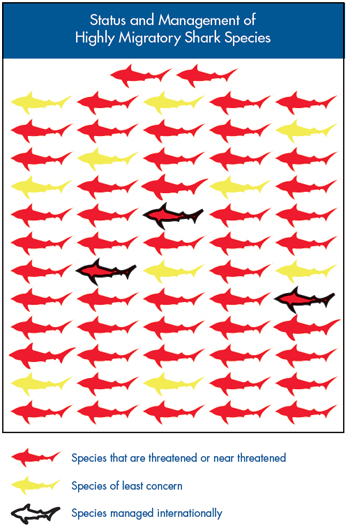 Current shark conservation and management measures range from the local to international levels, with some protections covering all species and others that are specific to only certain species. This has resulted in an inconsistent patchwork approach that does not adequately protect sharks. Key deficiencies identified in the Pew Environment Group analysis of shark conservation measures include:

Precautionary national, regional, and international protection measures to conserve sharks are urgently needed. The Pew Environment Group calls on all countries, territories, and entities to improve shark conservation and management by acting now to end unmanaged and unsustainable shark fishing and to regulate trade in threatened sharks.