The Elections Performance Index is a project that, for the first time ever, examines election administration performance across all 50 states and the District of Columbia  Users can click through the new online interactive to see where their state stands based on the indicators of their choice  View the interactive map. 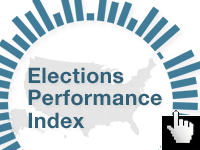 A state's performance is based on 17 measurable indicators such as polling location wait times, availability of voting information tools online, the number of rejected voter registrations, the percentage of voters with registration or absentee ballot problems, how many military and overseas ballots were rejected, voter turnout, and the accuracy of voting technology.

This new tool will make data easily accessible to election officials and policymakers to help them benchmark their performance over time, as well as assess which policies are working effectively.

The data featured in this report cover the 2008 and 2010 elections and will be updated when official 2012 data becomes available in late 2013.

To learn more about your state's election performance, visit our online interactive tool .

This study draws upon quantifiable data for all 50 states and the District of Columbia from the U.S. Census Bureau's Current Population Survey Voting and Registration Supplement, the Election Assistance Commission's Election Administration and Voting Survey, the Election Assistance Commission's Statutory Overview, state election division records, the Survey of the Performance of American Elections, George Mason University's United States Elections Project, and two earlier Pew reports: Being Online is Not Enough and Being Online is Still Not Enough. Any opinions and conclusions expressed herein are those of The Pew Charitable Trusts and do not necessarily represent the views of the above sources.

The Elections Initiatives project thanks all team members, Stephanie Bosh, Jennifer V. Doctors, and Gita Ram for providing communications work on the report, and Bobbie Dofflemyer, Jennifer Peltak, and Carla Uriona, for design and web support.

The elections performance index benefited tremendously from the insight and expertise of three external reviewers: Trey Grayson, director of the Institute of Politics at Harvard University; Brian Newby, election commissioner of Johnson County, Kansas; and David Kimball, professor of political science at the University of Missouri-St. Louis. These experts have found the report's approach and methodology to be sound; neither they nor their organizations necessarily endorse its conclusions.

We would also like to thank Doug Chapin of the University of Minnesota Humphrey School of Public Affairs for his invaluable guidance in thinking through the intricacies of analyzing election performance.