As the focus of the private sector retirement system has shifted in recent decades from traditional pensions to defined contribution plans, worker savings have played an increasingly critical role in ensuring retirement security. And that means workers must consider how best to use their investments. Retiring workers may be able to use their retirement savings, among other options, to delay the start of Social Security benefits. Postponing these initial claims can be beneficial: The increases in monthly Social Security benefit payments vary, but the gain from a year’s delay can top 8 percent.

Many states are looking at setting up individual retirement accounts (IRAs) with automatic enrollment—known as auto-IRAs or Secure Choice programs—for private sector workers without workplace retirement savings plans. Half of U.S. states have considered establishing these IRAs and five—California, Connecticut, Illinois, Maryland, and Oregon—are implementing them. Under state auto-IRA programs, those without access to a retirement plan on the job are automatically enrolled and contribute a preset percentage of their wages or salaries. They can choose to opt out of the program or change the contribution percentage.

Savings in IRA accounts—whether state-sponsored or privately established—give workers more options as they reach retirement. For example, account owners could make regular withdrawals to supplement other retirement income, or they could convert their savings to annuities if appropriate. Retirees could use the balances as rainy day savings to cover large repairs, medical bills, or any other purpose.

This brief looks at the possibility of using auto-IRA balances to help delay taking Social Security. Specifically, auto-IRA participants who retire at age 62 could use their accounts as a short-term income source—and fund the first months or years of retirement with monthly withdrawals from these IRAs in amounts equal to the Social Security benefit that would have been available at that age.

To examine the potential for using auto-IRAs to increase total retirement benefits, Pew worked with the Social Security Administration (SSA), which used its Modeling Income in the Near Term (MINT) microsimulation model. The simulation assumed the state auto-IRA plans had a 3 percent default contribution rate, meaning that 3 percent of workers’ salaries would be contributed to the accounts starting in 2019 unless they take other action. The model takes into account workers’ ability to opt out and the probability that some will contribute amounts different from the default. It also captures the demographic characteristics of those likely to take part in state- sponsored auto-IRAs. For example, research shows that workers who do not have access to a retirement plan on the job are more likely than the workforce as a whole to be young, members of minority groups, earning lower incomes, and working for smaller employers.1 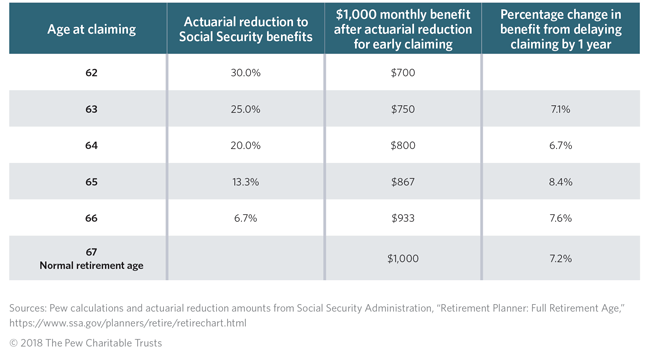 For people born in 1960 or later, the normal retirement age for Social Security is 67.2 Those who start collecting benefits at an earlier age receive payments over a longer period than do those who start at age 67 or later.

Because the Social Security benefit formula is structured to keep total lifetime benefits relatively constant in order to eliminate any financial advantages from claiming early, this translates into lower monthly benefits for those who take benefits earlier.3 These reductions are permanent.

That means that a worker who claims Social Security benefits at age 62 would receive 30 percent less in the monthly benefit, as shown in Table 1, than would someone claiming at age 67: The worker who starts collecting at age 62 would receive $700 a month, compared with $1,000 for the worker who waits until age 67. Delaying payments for a single year increases payments by about 7 to 8 percent, depending on the claimant’s age.

Claiming benefits later therefore can mean significantly greater monthly and annual Social Security benefits.4 Delaying the start of these payments can be especially advantageous to married couples, because when the recipient dies, the surviving spouse continues to receive the higher of the two spouses’ benefits whether or not he or she was the primary earner.5

At Pew’s request, the SSA used its microsimulation model to explore how many retirees could use their auto-IRA accounts to delay claiming Social Security by one or more years.6 The SSA modeled savings in auto-IRA plans assuming that participants contribute a default rate of 3 percent of their salaries to their accounts, with some eligible workers contributing more, some less, and some opting not to participate at all. In order to be eligible to participate in an auto-IRA plan in a given year, a worker must be over age 18, must work for an employer with 25 or more employees, and must not have access to a retirement savings plan or traditional pension through an employer. Workers were assumed to start contributing in 2019. The model assumes that account assets are invested in life cycle portfolios linked to worker age with allocations updated annually.7

Table 2 presents results for workers who contribute to auto-IRAs for one to 31 years. By 2030, a worker would have had the opportunity to contribute for 11 years, and by 2050 participating workers would have been able to contribute for 31 years. Many workers will contribute for less than the maximum possible years because workers are expected to enter and leave the auto-IRA program, depending on changes in their employment situation and whether the employers already offer retirement savings plans. The microsimulation modeling accounts for such changes in employment and pension coverage. Additionally, older workers who entered the auto-IRA system just a few years before retiring will have contributed for fewer years.

The outcomes are moderately progressive in that they show benefits for some groups that have a hard time saving in traditional retirement systems. For example, the modeling indicates that Hispanics would be able to use their auto-IRA accounts to delay claiming Social Security benefits for lengths of time similar to, if not greater than, other groups. This may be because Hispanic workers are less likely to work for an employer who offers a retirement plan,8 so that Hispanics on average would participate in auto-IRA plans for longer periods of time than would other racial or ethnic groups—and therefore accumulate relatively higher auto-IRA balances. That money then could be used to delay Social Security benefits longer.

The analysis also shows that workers with the most education (a college or graduate degree) and the least education (less than a high school diploma) may be able to delay taking Social Security for longer periods than may others. For the highly educated, that is because of the interaction between higher earnings and Social Security’s benefit structure. More education is associated with higher earnings,9 and higher earners would contribute more to auto-IRAs each year they participate, subject to contribution limits.10 At the same time, Social Security’s benefit formula replaces less preretirement income for higher earners than for lower-income earners.11 Because of these two factors, higher earners reach retirement with higher account balances that they could use to “buy” or replace more months of Social Security benefits. Compared with those with a college degree or more, workers with the least education tend to have less access to employer-provided pensions or savings plans and could participate for more years in a state-sponsored auto-IRA plan and accrue relatively higher balances. 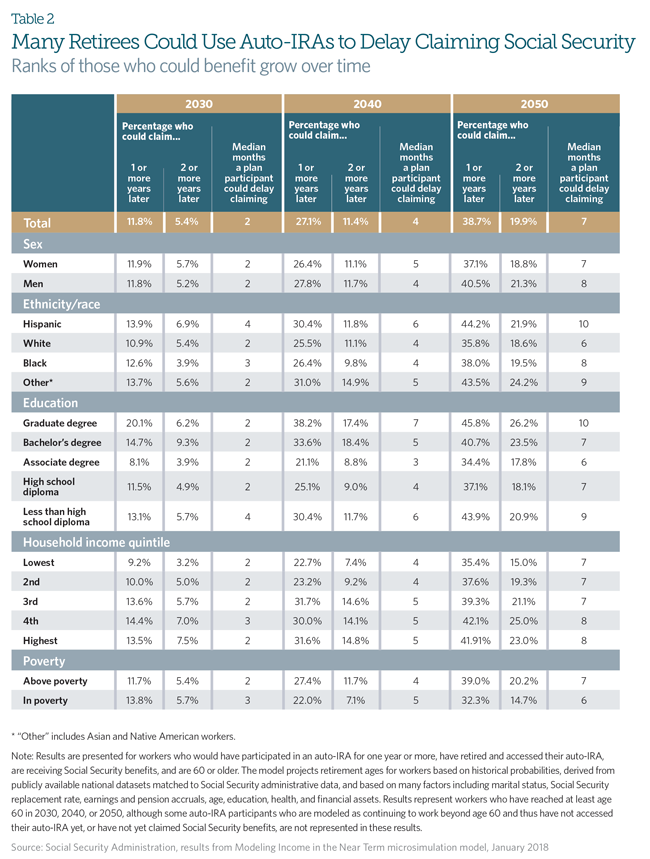 The strategy of using auto-IRAs to delay claiming Social Security may not suit everyone. Many workers will still want or need to start receiving Social Security benefits at age 62. Some may be unemployed or underemployed, and need the income; others may face the possibility of dying early, and therefore might not benefit from delaying the start of Social Security. Others may need to claim Social Security before the normal retirement age because of health problems that are not severe enough to warrant qualification for Social Security Disability Insurance.

For those workers who need to claim Social Security benefits early, the money in an auto-IRA account then could provide a rainy day fund or a modest addition to retirement income.12

Retirees with lower-than-average life expectancies would be able to increase monthly benefits using this strategy, but doing so could have other implications. They might receive lower total benefits over their lifetimes because Social Security’s actuarial adjustments for different claiming ages are calculated to provide a constant level of lifetime benefits for retirees with average lifespans. For a person with a shorter life expectancy in retirement, higher monthly benefits over a shorter-than-average lifespan could mean lower total lifetime benefits.

Social Security will face a financial shortfall in the coming decades, with the impact likely to be felt starting in 2034. Under the current structure, the program will be able to pay only about 77 percent of scheduled benefits that year, leaving many of those claiming benefits in potential limbo.13 That could affect how those with auto-IRAs who turn 62 around that time approach their Social Security benefits. It is not clear how Congress will address the Social Security shortfall: Possible solutions include benefit cuts, payroll tax increases, or infusions of cash into the program. Policymakers may or may not act to shore up the system, which boosts the need to help workers build retirement resources through their own savings.

Although many workers link retiring from the workforce with starting Social Security benefits, the two are actually independent of one another. The state-sponsored auto-IRA accounts either under consideration by policymakers or already being implemented have the potential to help workers leave the workforce when they choose:

Their IRA savings could help meet their day-to-day needs if they decide to delay claiming Social Security. This approach may not be appropriate for all, but for those who could take advantage of it, the strategy could mean higher Social Security payments later in their retirement years.

At the Social Security Administration, Dave Shoffner capably ran the MINT model using parameters derived from public use datasets and agreed-upon assumptions related to auto-IRA implementation. Mark Sarney and Shoffner provided valuable input and comments throughout the research and writing process. We are grateful for their patient and enthusiastic collaboration on this project.

The Social Security Administration used its Modeling Income in the Near Term (MINT) microsimulation model to produce the data in this brief. In order to forecast retirement income, MINT projects work histories, mortality, marital status, and disability status for all individuals in the simulation on a national level. The SSA’s modeling for this project incorporates several assumptions. Specifically, in order to be eligible to participate in an auto-IRA plan, a worker must be over age 18, must work for an employer with 25 or more employees, and must not have access to a retirement savings plan or traditional pension through an employer. Workers are assumed to start participating in 2019. Rates of participation in auto-IRA plans are based on results of Pew’s survey of employees, “Worker Reactions to State-Sponsored Auto-IRA Programs.”14 Workers are assumed to access their accounts at retirement, which in the MINT model is interpreted as working less than 20 hours a week. Results are calculated on a national basis. Income quintiles are as follows (in real 2015 dollars):