On May 19, 2016, Maryland Governor Larry Hogan (R) signed into law S.B. 1005, the Justice Reinvestment Act, which advances research-based sentencing and corrections policies. Developed by the bipartisan Justice Reinvestment Coordinating Council and passed unanimously in the Senate and with strong support in the House of Delegates, the bill is projected to cut the state’s prison population by almost 1,200 inmates and save an estimated $80.5 million over 10 years.

Maryland’s incarceration and crime rates declined over the past decade, but the state still imprisons more than 20,000 offenders at an inflation-adjusted cost of $1.3 billion annually, up 10 percent from 2006. State policymakers, concerned about the public safety return on those investments, undertook a study of the corrections system.

The Justice Reinvestment Coordinating Council reviewed prison admissions, sentence lengths, release policies, and research on what works to reduce recidivism. It found that nonviolent offenders made up almost 60 percent of new prison entries in 2014 and that 58 percent of admissions stemmed from probation or parole violations rather than new convictions. The council also determined that inmates were spending 23 percent more time behind bars than a decade before, driven by a 25 percent increase in the average sentence length. Finally, the council found that only 37 percent of those released from prison were paroled, having served nine months past their parole eligibility, on average.

State officials projected that over 10 years, the council’s recommendations would avert an anticipated 4 percent prison growth and reduce the prison population by nearly 1,200 inmates (see Figure 1), saving Maryland taxpayers $80.5 million. The law requires that a portion of the savings be used to fund grants for community-based recidivism reduction programs. The fiscal year 2017 budget also included $3 million for treatment of substance use disorders. 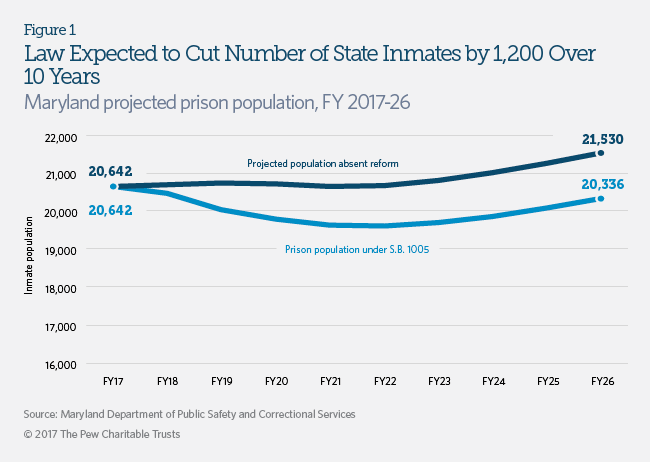 Throughout its work, the council focused on how to treat offenders suffering from substance abuse or mental health problems and explored re-entry programs that could help them become contributing members of their communities once they return home.—Governor Larry Hogan (R), Dec. 17, 2015

The council included criminal justice stakeholders representing the judiciary, the legislature, law enforcement, community-based programs, the prosecutorial and defense bars, and corrections agencies. From June to December 2015, the group conducted a comprehensive analysis of the state’s sentencing and community supervision data, assessed current policies, evaluated best practices in other states, and developed recommendations.

To identify priority issues and key reforms, the council held four public hearings around the state and two roundtable discussions with victims, victim advocates, and survivors. After receiving input from the public and assessing statewide data, the council developed policy recommendations and submitted them to the governor and General Assembly for consideration during the 2016 session.

The Pew Charitable Trusts and its partner, the Crime and Justice Institute at CRJ, provided technical assistance to the council, including analyzing Maryland’s sentencing and corrections data and systems, developing policy options, and educating the public and policymakers about the recommendations. This assistance was administered as part of the Justice Reinvestment Initiative, a public-private partnership between Pew and the U.S. Department of Justice’s Bureau of Justice Assistance.

We both believe strongly in justice and public safety, and we want the best for Maryland citizens. It is these common beliefs that bring us together now to back the Justice Reinvestment Act (S.B. 1005/H.B. 1312), a data-driven, evidence-based policy package, which we are proud to have helped develop.—joint statement by Justice Reinvestment Coordinating Council members Scott D. Shellenberger (D), Baltimore County state’s attorney, and state Public Defender Paul B. DeWolfe, Feb. 29, 2016

1. Most prison admissions were for nonviolent offenses.

In fiscal 2014, nonviolent convictions comprised 58 percent of all prison admissions, including the most common offense for which a prison sentence was issued—possession with intent to distribute narcotics—as well as five of the top 10 offenses earning a prison term. (See Figure 2.) Despite an overall drop in prison sentences for drug offenses from 2005-14, admissions for other nonviolent crimes had not declined as much or, in some cases, had increased. For example, felony theft admissions—one of the 10 most common—rose 8 percent. 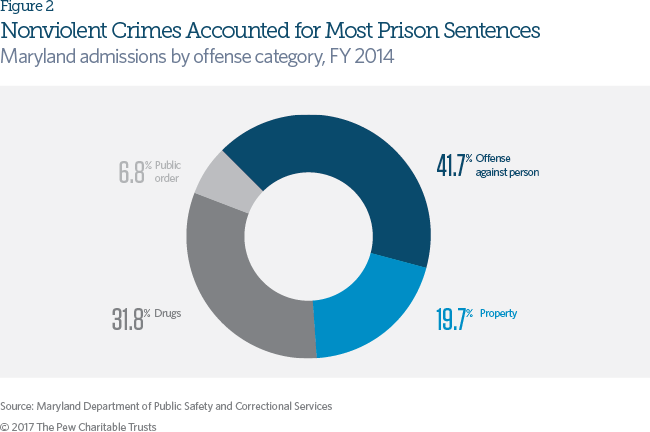 2. Admissions for revocations of supervision outnumbered those for newly sentenced prisoners.

Nearly 60 percent of those sentenced to prison in 2014 were behind bars for breaking the rules of their community supervision. (See Figure 3.) Many of these probation and parole returns to prison were for technical violations, such as failing a drug test, missing a meeting, or being arrested for—but not convicted of—a new crime. In fiscal 2014, technical violations accounted for more than 70 percent of parole and mandatory supervision returns to prison and over 40 percent of probation revocations. 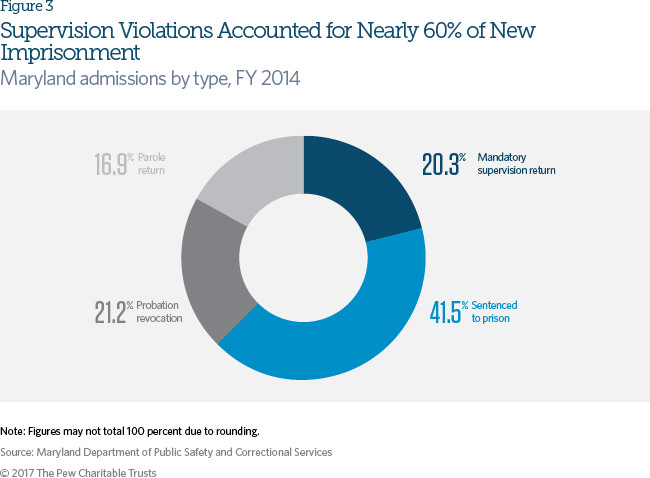 From 2005-14, initial sentences issued by judges and time served by offenders increased across all offense types. The average sentences for new prisoners and for revoked probationers rose 25 and 29 percent, respectively. Driven by a lengthening of sentences, the amount of time spent behind bars went up by an average of 23 percent, or 6.7 months. Time served for newly sentenced prisoners rose 30 percent, and for those incarcerated because of probation revocations, it increased by 25 percent. In addition, property offenders—another nonviolent category of prisoners—served 13 percent longer than a decade ago.

Time and again, we see families struggling to survive when loved ones are locked up. When finally released, they struggle to secure and maintain a stable job with a criminal record. The message is the same over and over again: Overreliance on incarceration is not working.—Caryn York, Justice Reinvestment Coordinating Council member and senior policy advocate for Job Opportunities Task Force, in the Maryland Reporter, April 9, 2016

5. Only about a third of inmates were paroled, and those who were faced significant delays before release.

Just 37 percent of inmates were released on parole in fiscal 2014 (see Figure 4)—though that was an increase from 30 percent in fiscal 2005—and offenders who were granted parole served an average of nine months past their eligibility date. From 2005-14, drug offenders were most likely to be paroled, with 56 percent of those released put on parole, compared with less than half of all other nonviolent releases. 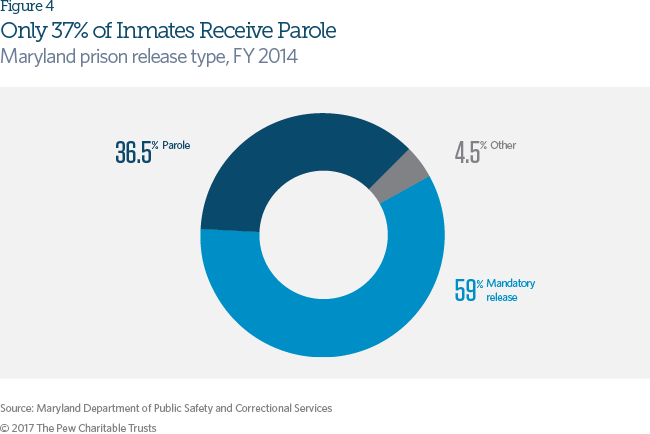 The council found that from 2005-14, for cases in which sentencing guidelines were applied and judges reported the results, courts were more likely to choose prison over other sentencing options—regardless of criminal history categories.2 In fiscal 2014, drug offenders were the least likely to be incarcerated; even so, they were sentenced to jail or prison 67 percent of the time. The remaining nonviolent offenders were incarcerated 76 percent of the time.

The increased admissions and length of stay trends contravene research demonstrating that alternative sanctions, such as probation, are as effective at reducing recidivism as incarceration and that longer prison terms do not reduce recidivism more than shorter ones.3

In December 2015, the council voted unanimously to forward 19 policy recommendations to state leaders. It projected that those policies together would reduce the state’s prison population 14 percent—to 17,600—by 2026 and save $247 million over the next decade. The General Assembly adopted many of the recommendations in S.B. 1005, which lowered the estimated savings to $80.5 million over 10 years. The bill passed unanimously in the Senate and by a vote of 123-18 in the House, with strong bipartisan support. Gov. Hogan signed the bill into law May 19, 2016.

The final bill included changes to mandatory minimum drug penalties, caps on the prison sentences that can be imposed for technical violations of supervision, and an expansion of earned time and parole practices. Lawmakers chose to partially implement the council’s recommendation to create an administrative parole process for nonviolent offenders, applying the policy only to certain low-level offenses. The full recommendation was to allow presumptive release for a wider pool of nonviolent inmates who had successfully completed their case plans, had committed no serious infractions, and were not subject to a victim-initiated parole hearing. In addition, lawmakers rejected a call for specific limitations to revocation sentences and modified parole eligibility for subsequent drug distribution offenses.

The law is organized around five primary goals.

Research shows that prison is often not the best or most cost-effective method for keeping the public safe and that for certain offenders, longer prison sentences can actually increase recidivism.4 Maryland’s legislative package draws on this research, prioritizing the state’s prison space for serious and violent offenders. The law: 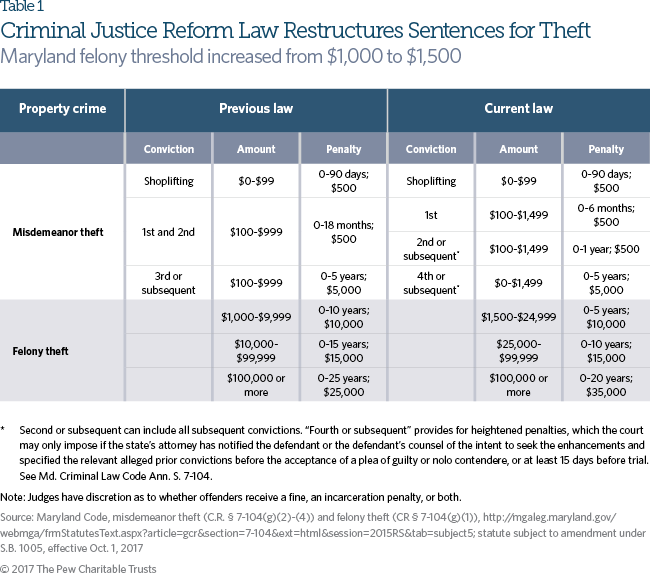 Probation and parole are important tools in reducing recidivism. To ensure targeted and effective supervision that is backed by research and to integrate evidence-based practices, the law:

Research shows that incentives are some of the best motivators to change offender behavior and reduce reoffending. To encourage participation in recidivism prevention programs and improve offender reintegration and public safety outcomes, the law:

4. Ease the burden on local corrections.

The functioning of local corrections agencies is critical to the health of the larger state system. To ensure that local jails and departments are able to implement evidence-based practices and improve public safety, the law:

To facilitate ongoing oversight of the reforms, monitor implementation, and track outcomes, the law:

In addition to the five primary goals, the law also increased possible penalties for selected serious and violent crimes:

* Initial member of the council.