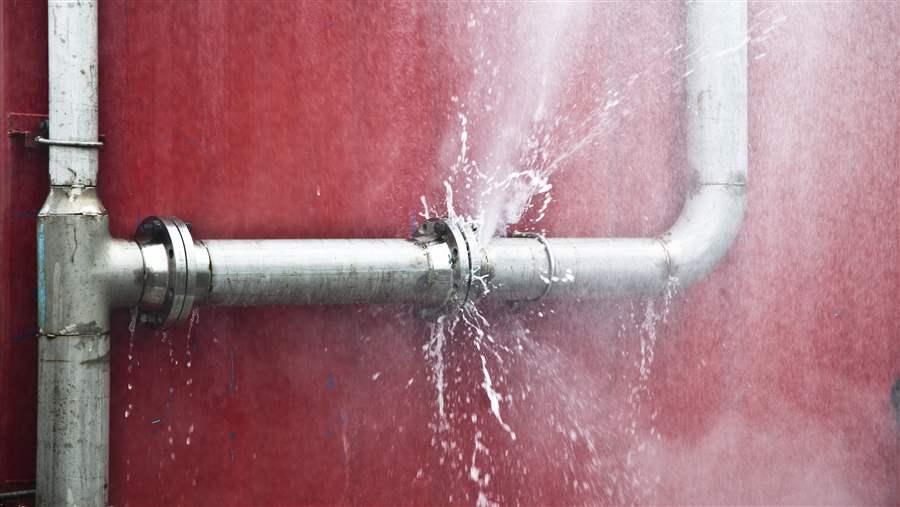 Because most households have relatively fixed and expected expenses each month, a single financial shock— such as a major car repair or a sudden loss of income—can make meeting those obligations more difficult. When Americans experience these unexpected expenses, most look to multiple sources of money.

Household savings are designed for such emergencies but are often insufficient to completely cushion an income loss or the cost of unexpected repairs on a home or vehicle. A 2015 report by The Pew Charitable Trusts gives a sense of how Americans say they would respond to a hypothetical scenario involving a financial emergency: Some 78 percent said they would use their savings and checking accounts, and 49 percent would turn to credit cards. About a quarter, though, would look to defined contribution retirement accounts, such as a 401(k), a 403(b), or an individual retirement account (IRA).

The availability of early withdrawals from certain retirement accounts such as Roth IRAs or in permitted situations like financial hardship creates a dilemma for policymakers and plan sponsors. The primary goal of tax-sheltered retirement savings is to increase the savings available for people when they leave the workforce. Taking out money early reduces the savings available at retirement as well as retirement income from these savings. For example, workers who take loans against their 401(k) accounts forgo any investment earnings on the borrowed amount for the length of the loan. Those who make withdrawals—known as distributions—from defined contribution accounts or IRAs before age 59½ not only pay taxes on the money but often also pay a 10 percent early withdrawal penalty.1 In addition, following a hardship withdrawal from a defined contribution plan, employees are often prohibited from contributing to the plan for at least six months. That typically results in permanently lower retirement account balances because it is so hard to catch up.

On the other hand, allowing people to withdraw funds early under limited conditions helps them manage financial shocks. In fact, such early withdrawals can in some cases prevent cascading economic problems, for example, by allowing people to keep a car in working order or retain a house and home equity. In most instances, the cost of borrowing could be cheaper via a 401(k) loan than through an auto title loan, a rent-to-own loan to replace an appliance, or a personal loan. Early withdrawals also could help boost earnings or wealth for retirement by helping to pay for more education or a home purchase. Maintaining access to such funds is critical for those who might not contribute to their retirement plans at all if they could not access any of the savings until they retire.2

To examine the impact of financial shocks on retirement security, Pew analyzed data from its Survey of American Family Finances, a nationally representative survey with a sample size of more than 5,661 households conducted in two waves, in late 2014 and late 2015. Participants were asked about financial shocks that occurred in the 12 months before the survey, about retirement account withdrawals in the same time period, and about their current financial situations. This brief focuses on survey respondents ages 20-58 who were not retired and did not have a retired spouse.

This brief documents the relationship between financial shocks and loans or early withdrawals from retirement plans. Among the major findings:

Pew defines financial shocks as large unplanned expenses, such as a major home or car repair, or income lost to unemployment, a pay cut, illness, injury, or death.3 In most cases, families have not budgeted for such expenses or income losses, but these incidents are not rare. According to the survey, 56 percent of workers ages 20-58 lived in a household that experienced a financial shock in the previous year.

Among households reporting one or more financial shocks, most said that their most expensive were either car repairs or income losses from a pay cut or unemployment. (See Figure 1.) Smaller numbers reported that their most expensive financial shocks were caused by house repairs, medical emergencies leading to hospitalization, or a change in marital status such as separation, divorce, or the death of a spouse.4 “Other” shocks were attributed to a variety of causes, including funeral expenses, veterinary bills, moving expenses, or unexpected costs associated with running a small business. 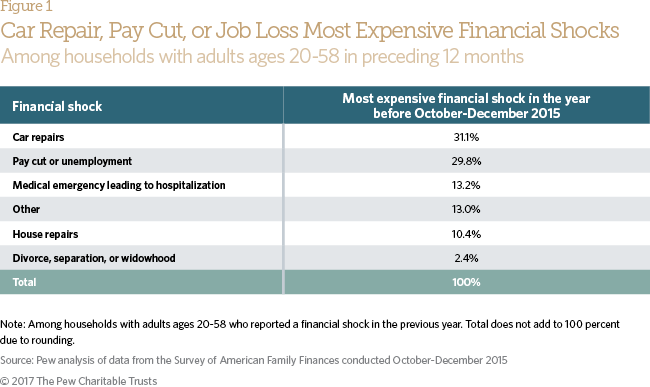 The median cost of the most expensive financial shock was $2,000 in households with adults ages 20-58 experiencing a shock. One-quarter of survey respondents had unexpected expenses of $700 or less, although another quarter faced expenses of $6,000 or more and 10 percent experienced a shock that cost at least $15,000.

The cash and savings that households have on hand are intended to help in emergencies such as car repairs or medical expenses, but they are often not large enough to weather a serious financial shock. Pew’s 2015 analysis of data from the Survey of American Family Finances found that 41 percent of surveyed households did not have enough liquid savings to cover the $2,000 cost of the median “most expensive financial shock.”5 Pew also asked about several other sources of emergency funding, including “retirement accounts, such as 401(k)s or IRAs.” In the analyses that follow, the figures refer to respondents ages 20-58 who owned retirement accounts and also experienced financial shocks in the year leading up to Pew’s survey from October to December 2015. 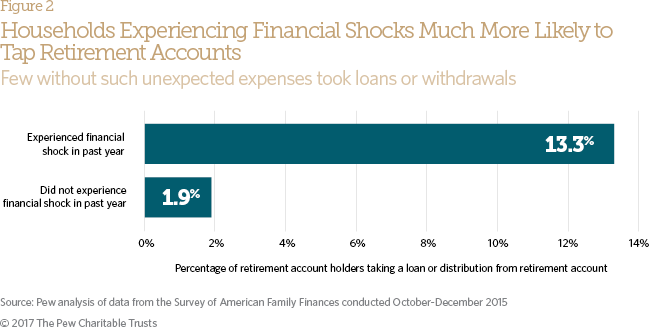 People with lower annual incomes were more likely to withdraw money from their retirement accounts, as a loan, a withdrawal while still employed, or a distribution, than were higher-income individuals or households. About 16 percent of those with an annual income under $50,000 used their retirement accounts during a year in which they experienced a financial shock, compared with 8 percent of those with an annual income of $150,000 or more.10 For some lower-income households, an income shock such as unemployment or a pay cut may help explain their income status at the time of the survey.

The actual dollar cost of the financial shock, by itself, was not a significant factor in whether a household turned to its retirement account. Not surprisingly, the likelihood increased when the cost represented a greater share of monthly income. (See Figure 3.) In cases where the cost was less than or equal to reported monthly household income, about 12 percent of retirement account owners who experienced a financial shock drew from their accounts that year. That figure jumped to 18 to 19 percent when the financial shock exceeded monthly income.11 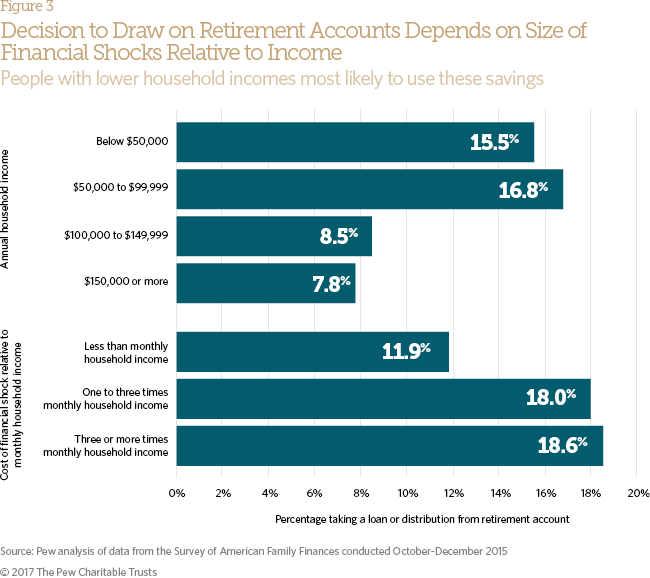 Many households struggled to make ends meet after their most expensive financial shocks, including a third of high-income households. Of those who had recovered from a financial shock by the time of the survey, the average respondents reported that it took “a few months” before they could make ends meet again. Some 14 percent said recovery took at least six months.12 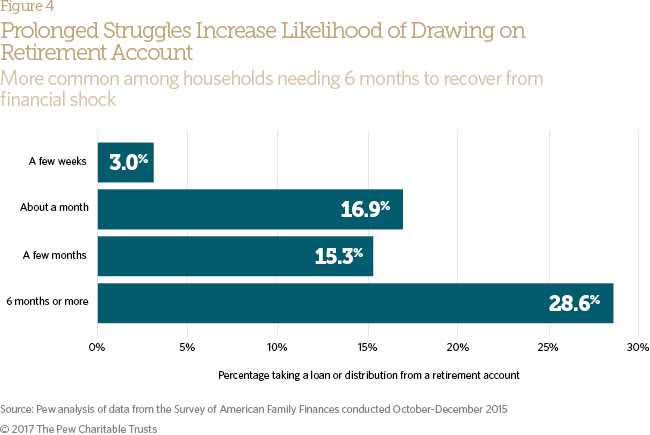 The likelihood that households would use their retirement accounts increased during years in which they experienced an income loss, such as unemployment or a pay cut. About 25 percent of those who had experienced such a loss turned to their retirement accounts.14 Many of those who had lost jobs were out of work for months. According to federal statistics, the average length of unemployment for full-time workers in 2014 was four months.15

While only 2 percent of respondents cited marital change as their largest expense in the previous year (see Figure 1), the costs of these changes can be high. Some 23 percent of respondents who said marital change was their most expensive shock turned to their retirement account. (See Figure 5.) The death of a spouse can mean lost income. A separation or divorce often brings the costs of setting up a second household as well as substantial attorneys’ fees. Among all respondents who reported a change in marital status in the year before the survey, the median financial cost resulting from that change was $4,500, which was greater than the median cost experienced by those who had a medical emergency ($2,000) or who saw their income drop because of a pay cut, reduced hours, or unemployment ($2,000). Other researchers have also found that income loss and changes in marital status are important causes of retirement account withdrawals.16 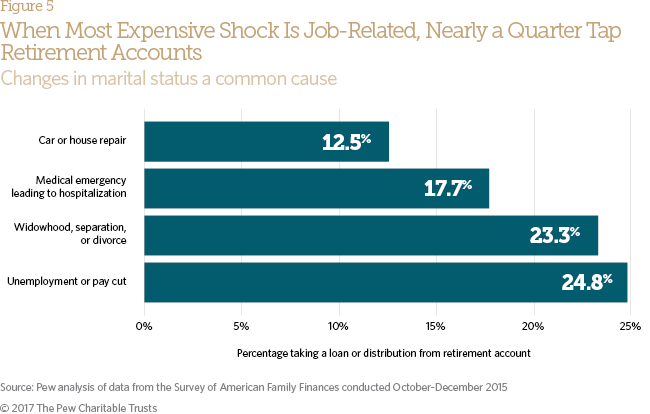 The level of education also can be an indicator of whether people turn to these savings in response to a financial shock. More years of schooling significantly reduces the likelihood of drawing on a retirement account in these circumstances. (See Figure 6.) A college degree or more education can mean increased financial literacy and the mathematical skills that are helpful in retirement planning.17 This level of schooling also can translate into higher incomes,18 more savings and wealth, and better access to affordable credit. Those factors all make it easier for those with college degrees to deal with unexpected expenses. Just under 10 percent of those with a college degree and a retirement account tapped those accounts in the year following a financial emergency, compared with 16 or 17 percent of those with a high school diploma or less education, or with some college, respectively.19 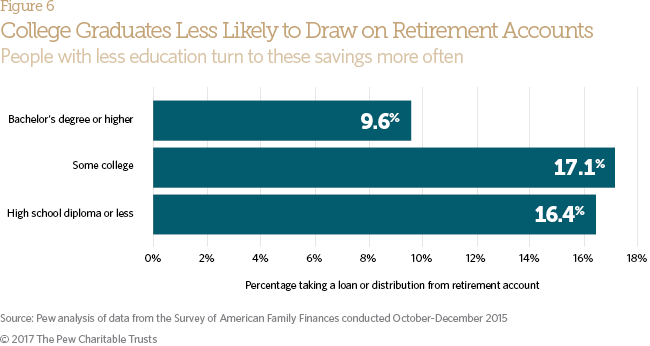 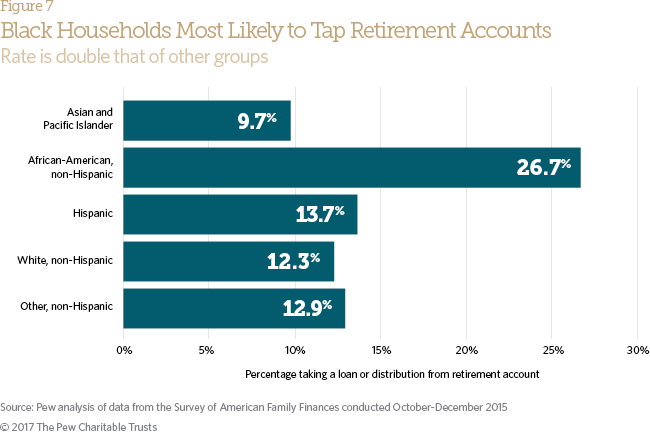 In general, households with lower incomes, and members of certain minority groups, often have more precarious financial pictures and fewer resources to cushion against financial adversity. The typical white household has a little more than one month’s income in liquid savings, compared with 12 days for the typical Hispanic household and just five days for the typical African-American household.21 Whites and households with more education and greater income also typically have better access to affordable credit.22 Those who draw on their retirement accounts at higher rates in the event of financial shocks do so because they have few other options. The finding that lower-income households and minorities are more likely to have accessed their retirement accounts also may help explain persistent gaps in retirement account balances by income and race.23

To preserve retirement savings for retirement income security, policymakers and the financial sector could consider how to establish additional financial buffers that encourage short-term savings in addition to retirement savings. Given that new tools like automatic enrollment in retirement savings programs have greatly boosted participation, it may be possible to look at using payroll systems to help Americans improve their rainy day savings and allow them to keep more of what they save for retirement. For example, policymakers are in the early stages of looking at ways to allow workers to save for financial shocks, as well as for their retirements, through payroll deductions, possibly in a bank account or Roth IRA. These “sidecar” accounts could provide workers with flexibility to manage emergencies and help prevent the need to draw from retirement accounts.

The data reported here were collected in waves 1 and 2 of Pew’s Survey of American Family Finances, conducted by The Pew Charitable Trusts, with most statistical analyses drawn from wave 2. The survey was administered to a nationally representative panel between Nov. 6 and Dec. 3, 2014. The second iteration was administered to the same panel between Oct. 27 and Dec. 1, 2015. Including only respondents who answered both years and oversamples of black and Hispanic respondents, the total sample size was 5,661. Survey firm GfK collected the data on behalf of Pew and administered the computer-based questionnaire in English and Spanish. All reported data were weighted. For clarity of analysis, respondents who chose not to answer a question were excluded from the statistics generated for that item. Overall, item nonresponse was 2.2 percent for the 2014 survey and 1.5 percent for the 2015 survey. Additional details about the survey and its methodology are available at pewtrusts.org/Survey-of-American-Family-Finances-Methodology.

The analysis focuses on respondents ages 20-58. Members of this age group are still in their working years and have not reached the age at which retirement account holders may make penalty-free withdrawals (59½). Respondents who reported that they or their spouse or partner were retired were dropped from the sample in order to focus the analysis on retirement account withdrawals that were not related to retirement itself. Retirement account ownership was measured in wave 1 to capture all owners, including those who cashed out their accounts or took a lump sum distribution upon separating from a job by wave 2. Because of data limitations, regressions were not included in the analysis.