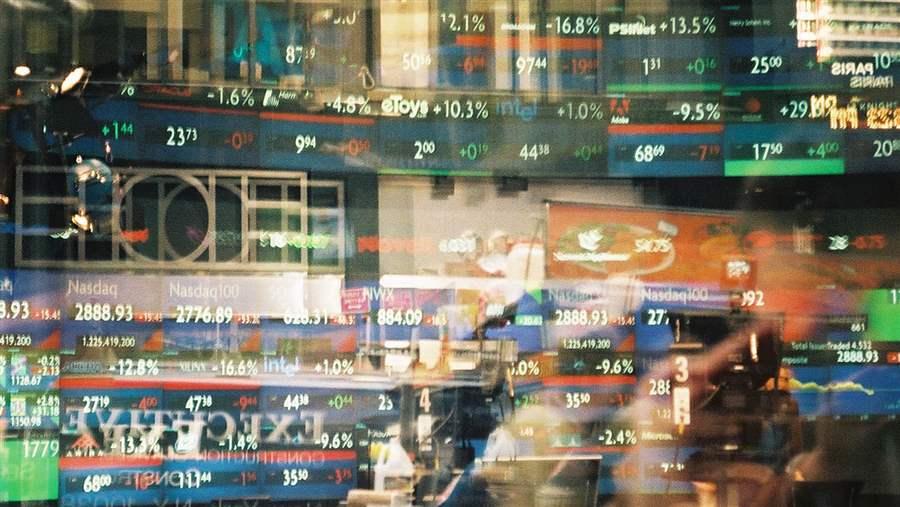 The gap between the total assets reported by state pension systems across the United States and the benefits promised to workers, now reported as the net pension liability, reached $1.1 trillion in fiscal year 2015, the most recent year for which complete data are available. That represents an increase of $157 billion, or 17 percent, from 2014.

A state pension plan’s annual funded ratio gives an end-of-fiscal-year snapshot of the assets as a proportion of its accrued liabilities. In aggregate, the funded ratio of these plans dropped to 72 percent in 2015, down from 75 percent in 2014. Investment returns that fell short of expectations proved to be the largest contributor to the worsening fiscal position, with median overall returns of 3.6 percent.1 On average, state pension plans had assumed a long-run investment return of twice that—7.6 percent—for fiscal 2015.

Though final data for 2016 are not yet available, low returns will also be reflected there. Based on returns averaging 1.0 percent for that year, the net pension liability is expected to increase by close to $200 billion and reach about $1.3 trillion. Market volatility will also have a significant impact on cost predictability in the near and long terms.

Expected increases in the nationwide funding gap of more than $350 billion over two years—primarily because of lower-than-forecast investment returns—will require policymakers in many states to choose from often difficult options: paying more into state pension plans and potentially crowding out other spending in their budgets, or letting funding levels drop and pushing costs into the future.

Figure 1 shows trends in aggregate assets and liabilities since 1997. Fiscal 2014 and 2015 data reflect new reporting standards developed by the Governmental Accounting Standards Board (GASB), the independent organization recognized by governments, the accounting industry, and capital markets as the official source of generally accepted accounting principles for state and local governments. The GASB standards use the market value of assets and a different method for calculating liabilities than in the past. 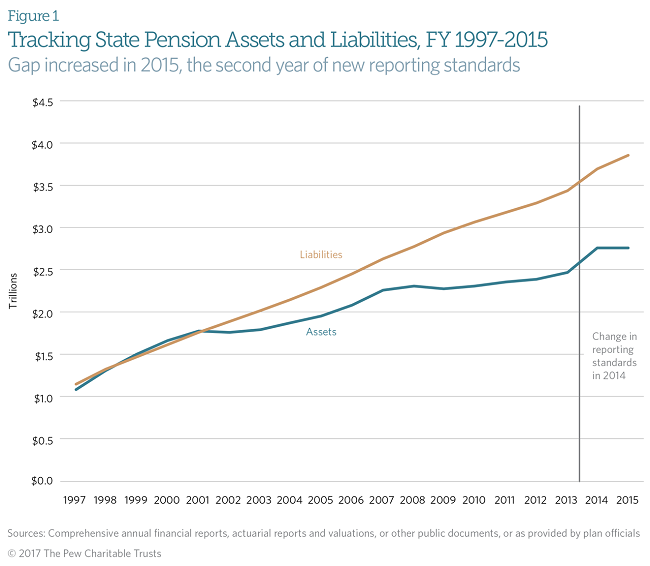 The updated standards call for enough detail to calculate whether payments to a pension plan are sufficient to make progress on reducing unfunded liabilities if plan assumptions hold, what is known as positive debt amortization. Analysis by The Pew Charitable Trusts calculates the employer pension contributions required to achieve this goal, or the net amortization benchmark.

From fiscal 2014 to 2015, plans’ performance against this benchmark improved for two reasons. First, the benchmark was lowered as asset levels increased in 2014 because of higher-than-expected investment returns. Second, states and participating local governments contributed more to their plans. However, these changes were not enough to offset the lower-than-expected investment returns in fiscal 2015 that led to the increase in reported pension debt.

Under the new accounting standards, pension assets are reported using market values rather than calculations that smooth gains and losses over time, as had been common. As a result, continued volatility in annual funding levels is likely.

Although one or two years of weak returns may not indicate fiscal danger for a pension plan, investment volatility does present a long-term policy challenge. Since the end of the Great Recession in 2009, overall median returns for public pension plans have ranged from 1.0 percent in 2016 to 21.5 percent in 2011. This volatility can be attributed in part to increased investment portfolio risk. The share of public funds’ investments in stocks, private equity, and other similar assets, has increased by over 20 percentage points since 1990.2

In addition to investment performance, underlying funding differences among pension plans and states reflect policy choices, including plan design, contribution policies, and investment return assumptions. For example, investment underperformance was the biggest driver of increased pension debt in 2015, adding roughly $125 billion to the funding gap overall, according to Pew estimates. Even if investments had yielded the expected returns, however, overall state pension debt still would have grown by about $30 billion.

That $30 billion increase in net pension liability, independent of market returns, can be attributed to several factors. Overall, state contributions fell short of net amortization by close to $8 billion, but other factors account for the remaining increase. They include one-time events, such as a court decision in Oregon and changes to actuarial assumptions in New Jersey.3

Plans’ investment return assumptions vary widely, which can have a large impact on the actuarial valuation and financial accounting data reported. For 2015, expected investment returns among general state employee plans ranged from 6.75 percent to 8 percent, with 12 plans using the higher figure. GASB reporting standards require plans to estimate and disclose liabilities based on projected returns that are 1 percentage point above and below their assumed rate of return, an example of sensitivity analysis, in which key fiscal measures are shown under different assumptions. The GASB disclosures show that if each plan used a return assumption that was 1 percentage point lower, the estimated liability would be $422 billion greater nationwide. Sensitivity analysis of plan fiscal health will be the subject of an upcoming Pew brief.

Funded ratio. The level of assets in proportion to accrued pension liability. This is an annual point-in-time measure, as of the valuation date.

Net amortization. Measures whether total contributions to a public retirement system would have been sufficient to reduce unfunded liabilities if all actuarial assumptions—primarily investment expectations—had been met for that year. The calculation uses the plan’s own reported numbers and assumptions about investment returns. Plans that consistently fall short of this benchmark can expect to see the gap between the liability for promised benefits and available funds grow over time.

Net pension liability. The difference between the total value of pension benefits owed to current and retired employees or dependents and the plan assets on hand. Pension plans with assets greater than accrued liabilities show a surplus.

Pension analysts, including credit rating agencies, can use the data collected under the new GASB standards to measure and benchmark the sufficiency of contribution policies. Pew developed a metric called net amortization, introduced in its 2014 funding gap brief and defined above, which it uses to set that benchmark.4 This is the second year that data have been available to calculate net amortization.

In fiscal 2015, 32 states achieved positive amortization, more than double the previous year’s number. The reason is twofold. First, employer contributions were higher than in 2014. States and participating local governments added $7 billion, or 10 percent, more to their pension plans in 2015. Second, the contribution benchmark— relatively volatile from year to year, as plan funding varies due to investment performance and other factors—was $11 billion lower in 2015 than in the previous year. 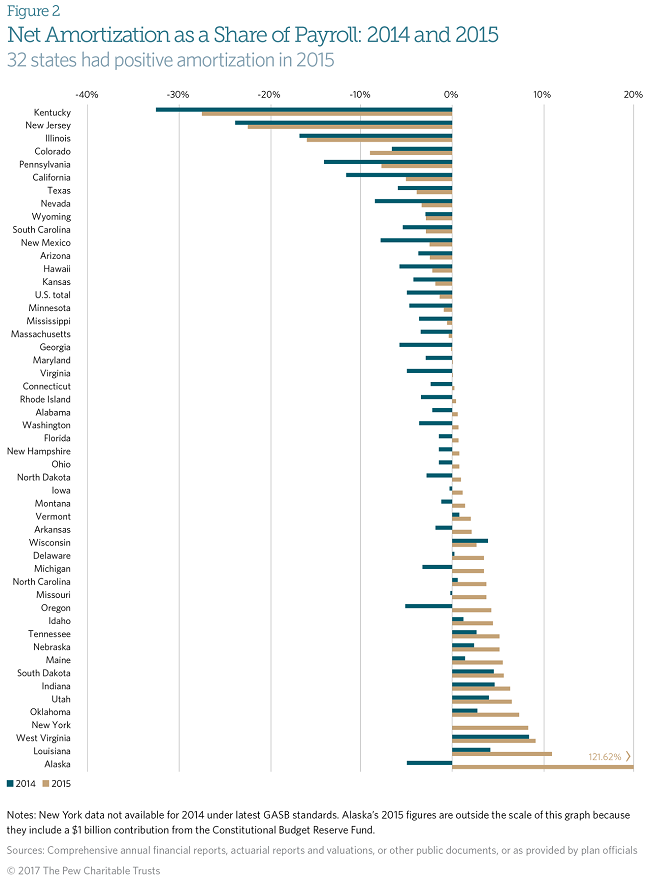 A worsening fiscal picture in fiscal 2015 was driven largely by weaker investment returns than in the previous year. Given the continued volatility in investment returns, state and local policymakers cannot count solely on returns to close the pension funding gap over the long term; they also need to follow funding policies that put them on track to pay down pension debt.

Even if pension plans had met their investment expectations in 2015, the gap would have increased because many state contribution policies did not reach positive amortization. A number of states improved on this measure—32 met the threshold for positive amortization in 2015 compared with just 15 in 2014. This reflects the timing of contribution calculations and improved funding conditions carried over from 2014, as well as the influence of efforts by state policymakers to strengthen contribution policies to start to close funding gaps.

This work is funded in part by The Pew Charitable Trusts with additional support from The Laura and John Arnold Foundation.