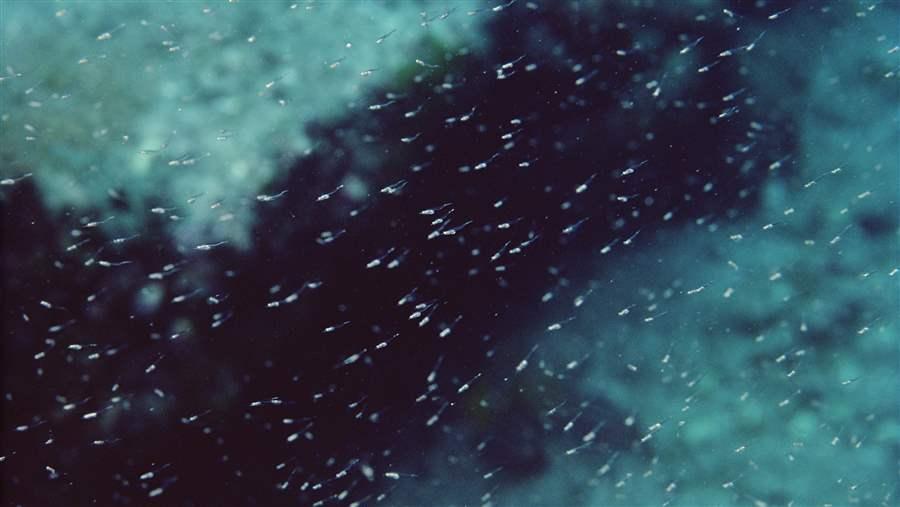 The Commission for the Conservation of Antarctic Marine Living Resources (CCAMLR) was established in 1982 as a direct response to rapidly increasing commercial fishing for Antarctic krill (Euphausia superba) in the Southern Ocean. CCAMLR’s mission is to protect, rather than exploit, the life in its waters. The Commission uses a science-based, precautionary approach to manage the marine ecosystem.

While other Southern Ocean species have been overexploited, Antarctic krill remain a critical piece of the food web in the region and provide protein for many important predators, including penguins. Declines in the krill population, especially in localized areas, could create a ripple effect throughout the Antarctic food web and cause imbalances in key predator-prey relationships.

Already, experts have found that a drop in the krill population drove a 50 percent decline in breeding colonies of Adélie and chinstrap penguins in the Antarctic Peninsula and Scotia Sea region from the mid-1970s to 2007; krill makes up 98 percent of those species’ diets.1

Today the krill fishery is increasingly concentrated around the Antarctic Peninsula, which also is one of the fastest-warming places on Earth.2 Scientists say fishing and the significant effects of climate change are working in tandem to drive the decline in krill.3 A reduction in sea ice in this region might explain this decline, as studies show that the number of Antarctic krill that reach maturity in a given year is linked to the amount of sea ice the previous winter.4

Commercial fishing grounds for Antarctic krill have a high degree of overlap with foraging ranges for land-based predators. This overlap creates fisheries competition that, combined with the impact of climate change, could weaken ecosystems and compromise breeding and feeding conditions for many Southern Ocean species. CCAMLR has employed a number of precautionary measures around the Antarctic Peninsula and the Scotia Sea to minimize potential negative effects, given a large level of uncertainty regarding the impacts of the krill fishery. 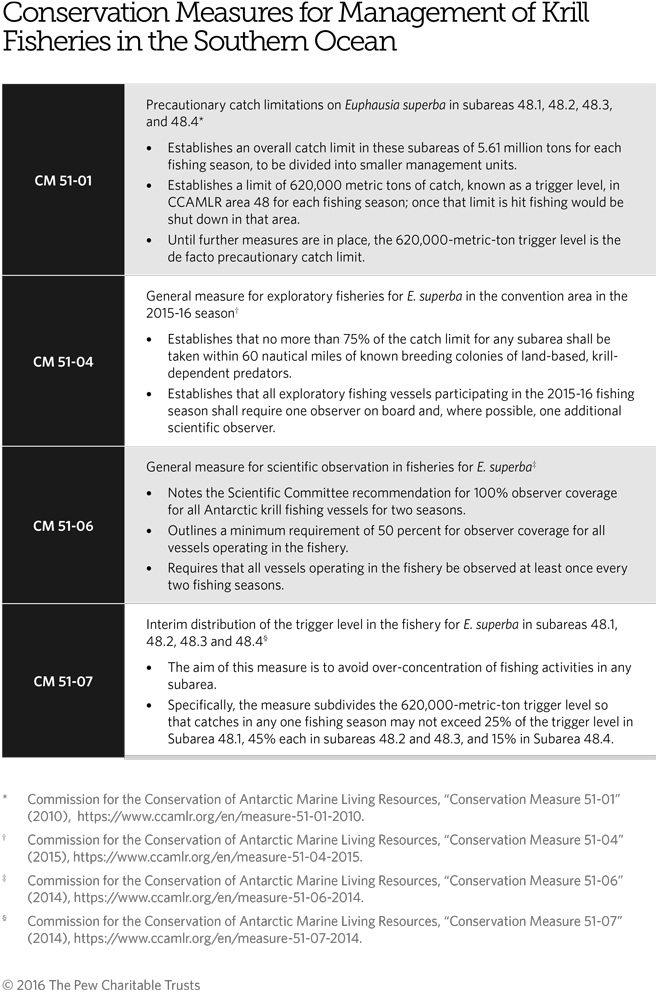 For example, CCAMLR adopted precautionary catch limits that include a “trigger level” that will shut down fishing when vessels catch 620,000 metric tons in CCAMLR Area 48.

Although CCAMLR set an overall catch limit of 5.61 million metric tons a year for all of its waters in 2010, the trigger level was set to prevent the krill fleet from concentrating its fishing in small areas; the limit can be adjusted if an ecosystem-based management system shows that such concentrated fishing is sustainable.

In 2009, to further lighten fishing pressure in areas where predators feed heavily on krill, CCAMLR adopted Conservation Measure (CM) 51-07, which divides the catch limit into subareas around the Antarctic Peninsula. That measure caps fishing in the nearshore area known as Subarea 48.1 at 25 percent of the catch limit. Concentrated fishing near land-based predator colonies could impair the ability of krill-dependent species to find food. This conservation measure is set to expire at the end of 2016 unless CCAMLR renews it by consensus. 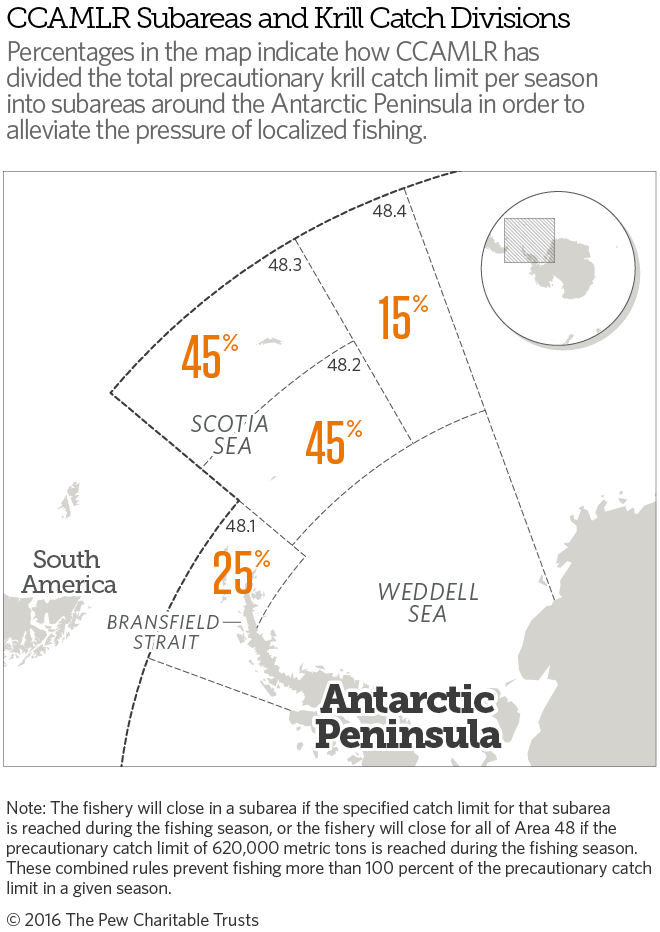 If CM 51-07 expires, fishing effort would probably become even more concentrated in some of the most sensitive parts of Area 48, particularly in the Bransfield Strait (in Subarea 48.1). CCAMLR scientists are developing an ecosystem-based management strategy—what the management body calls feedback management (FBM)— for the krill fishery. Until that work is done, the scientists have recommended that the Commission maintain the CM 51-07 subarea catch limits to help achieve CCAMLR’s conservation objectives.5 There is no scientific basis for ending this conservation measure.

Although the existing conservation measures are a good start, CCAMLR adopted them as only temporary solutions until it could gather more data and develop methods to better inform an adaptive, ecosystem-based management model for the krill fishery.

According to the CCAMLR Scientific Committee, FBM is “a system of managing the krill fishery that uses information on the status of the ecosystem to alter the levels of fishing in order to ensure that the desired state of the ecosystem is sustained.”6 FBM relies on monitoring the status and dynamics of important features of the ecosystem, such as populations of predators and prey. CCAMLR uses those data to increase or decrease annual catch limits in specific areas in order “to ensure that a desired state of the ecosystem is sustained.” It is a flexible system that, when successfully implemented, evaluates an ecosystem as a whole to determine how much of the krill population can be removed before negative impacts set in.

CCAMLR scientists acknowledge the uncertainty in identifying causal relationships among the impacts of climate change, fishing, and species declines. Therefore it is important that CCAMLR design an FBM plan that uses research on the cumulative impacts of krill fishing on the species’ overall biomass and local abundance, and on the predator species that rely on krill for survival.

Developing and implementing an FBM plan is a lengthy process that requires sufficient scientific data to design and implement. It also depends on a deep understanding of predator-prey relationships, and how these interact with the changing climate and human activities such as fishing. To address this, CCAMLR has agreed to an FBM process that includes four stages:7

CCAMLR is in Stage 1 of this process. To move into the next stage, the management body needs more analysis of data on krill biomass and the ecosystem effects of fishing, and improvements in the Commission’s monitoring system. 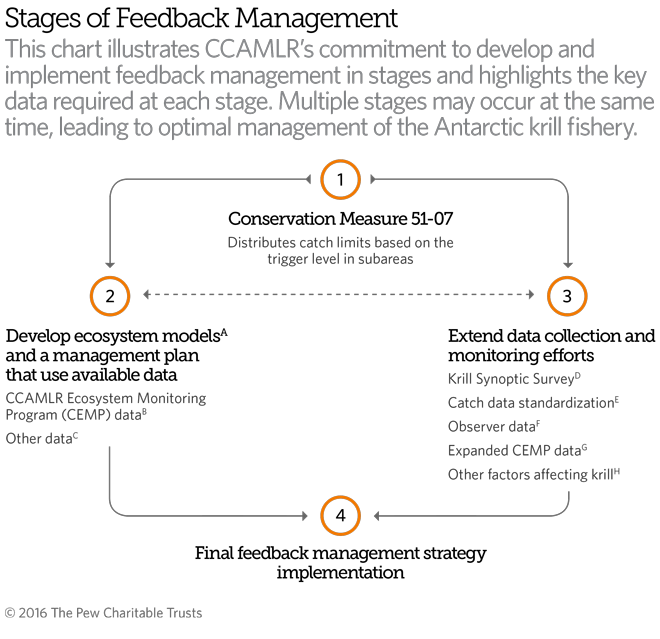 A. Ecosystem models: CCAMLR scientists are refining the models they use to set catch limits in small-scale areas. To do that, they are testing how predators respond to various fishing and environmental scenarios by using CEMP data as indicators. For example, the scientists are using one model8 that simulates krill-predator-fishery interactions and reproduces a plausible representation of past dynamics to evaluate catch levels in small-scale areas.

B. CCAMLR Ecosystem Monitoring Program (CEMP) data: This program was established to detect changes in the krill-based ecosystem to provide a basis for regulating the extraction of Antarctic living marine resources in accordance with CCAMLR’s mandate to protect the Southern Ocean. The program aims to detect and record significant changes in critical components of the ecosystem and to distinguish between changes due to commercial fishing and those due to environmental variability, including climate change. For indicator species such as penguins and other seabirds, example data sets include population size and condition variables (i.e., breeding success, body mass, foraging behaviour, etc.).9

D. Krill Synoptic Survey: A thorough, large-scale survey was last conducted in 2000 to estimate krill biomass and distribution in all of Area 48, which is where krill fishing occurs. Given the rapid environmental changes that have taken place in this area due to climate change, an updated survey is urgently needed.

E. Catch data standardization: Krill fishing vessels in CCAMLR’s waters are using five methods for estimating catch weight. Therefore, fishery managers are not confident they are getting accurate data on the total catch from the fishery. This needs to be rectified so data upon which an FBM plan is based are accurate.

F. Observer coverage: Data from observers on vessels—including the length, sex, and maturity stage of krill—are important in determining the species’ population dynamics, particularly because of the high cost of independent research. Observers could also collect acoustic and other wildlife data, including bycatch levels, and are key to ensuring accurate data for management of the fishery. The krill fishery, unlike that of toothfish, does not have full observer coverage, so these data are not available from all vessels.

G. Expanded CEMP data: Final implementation of FBM will require an expanded CEMP. This may include increasing the number of CEMP sites and using land-based and at-sea monitoring. The CEMP currently includes only land-based predators; detecting effects in pelagic areas may require monitoring the areas’ predators, such as whales, ice seals, and fish. Expanded CEMP indexes should include data collected at scales relevant to management questions of interest.

H. Other factors affecting krill: CCAMLR will also need to consider factors influencing krill movement such as (active swimming or transport by marine currents) and their physiological response to climate change and ocean acidification.

Although CCAMLR has agreed to develop feedback management in stages, members are still working to find the best coordinated approach or approaches. One commonality among FBM approaches proposed so far includes decision rules to allocate catch limits within management units or areas based on how predators and the ecosystem respond to changes in the amount of krill removed in a given year. Some proposals model predator-krill-ecosystem dynamics, while others include areas experimentally closed to fishing.

An MPA system is expected to be developed around the Antarctic Peninsula and Scotia Sea region, where the krill fishery is concentrated. While those MPAs are being developed, CCAMLR should also take the following steps to ensure science-based, precautionary krill fishing practices: