Consumers Want the Right to Resolve Bank Disputes in Court 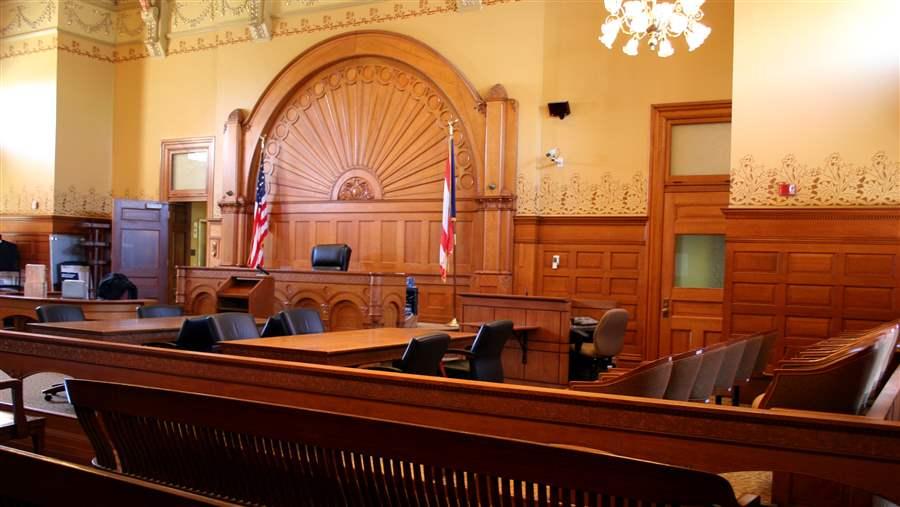 Pew urges the Consumer Financial Protection Bureau to expeditiously finalize rules that give consumers the ability to choose how they pursue a dispute.

Checking accounts are among the most widely used financial tools in the United States, and disputes can arise between consumers and their banks over fees and other policies. Customers wishing to pursue legal remedies often find that their options are limited, however; previous research from The Pew Charitable Trusts shows that many account agreements restrict the legal recourse available to consumers who have disputes with their banks.1

Each year since 2013, Pew has evaluated the dispute resolution policies and practices disclosed by the 50 largest retail banks in the U.S., which represent two-thirds of deposits nationwide.2 The latest review finds that almost three-quarters of the banks’ account agreements include clauses that mandate pre-dispute arbitration—a private process involving a third-party decision-maker whose decision is largely binding, giving the consumer limited opportunity to appeal—and prohibit consumers from seeking remedy in a court of law. Nearly three-quarters of the banks studied prohibit class-action lawsuits, which allow consumers to join together to bring a case that might be inefficient or impractical for them to bring individually. Ninety-one percent of the banks also bar consumers from having their disputes heard by a jury rather than a judge. Overall, more than 90 percent of these banks include at least one provision restricting consumers’ dispute resolution options.

Results from Pew’s November 2015 nationally representative survey of more than 1,000 individuals show that, overwhelmingly, consumers across generations, genders, and the political spectrum want access to the legal system and believe that banks should not be allowed to deny it. Pew’s study, and similar research from the Consumer Financial Protection Bureau (CFPB) on credit cards, indicates that although cost and time constraints would preclude most consumers from taking independent legal action if an issue arose, they want the right to pursue a class-action lawsuit.3 Such actions can hold companies accountable when consumers are unable to do so independently.

The Dodd-Frank Wall Street Reform and Consumer Protection Act authorizes the CFPB to limit or ban provisions in account agreements that restrict access to class-action litigation, and the bureau proposed rules in May 2016 that would bar financial institutions from denying customers this access.4

Pew’s research clearly demonstrates this divide between bank policies and customer preferences on dispute resolution limitations. The public wants access to the justice system, including the right to join and pursue a class action, while banks continue to restrict such access. Pew urges the CFPB to expeditiously finalize rules that give consumers the ability to choose how they pursue a dispute, rather than allowing financial institutions to limit their options. 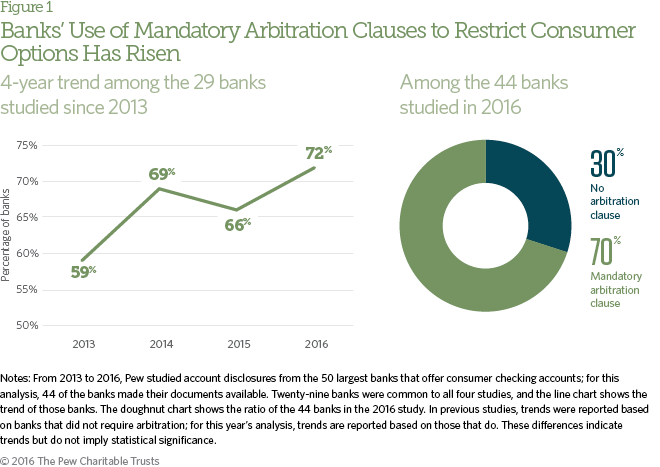 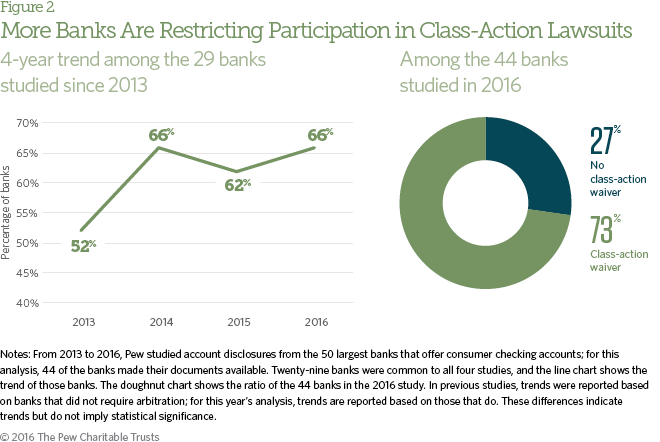 Among the 29 banks common to all of Pew’s studies, the percentage of banks with class-action waivers has risen from 52 percent to 66 percent since 2013, and nearly three-quarters (73 percent) of the 44 banks studied in 2016 have such language in their account agreements. Notably, banks in this study with mandatory binding arbitration clauses are more likely than banks without them to limit class actions.5 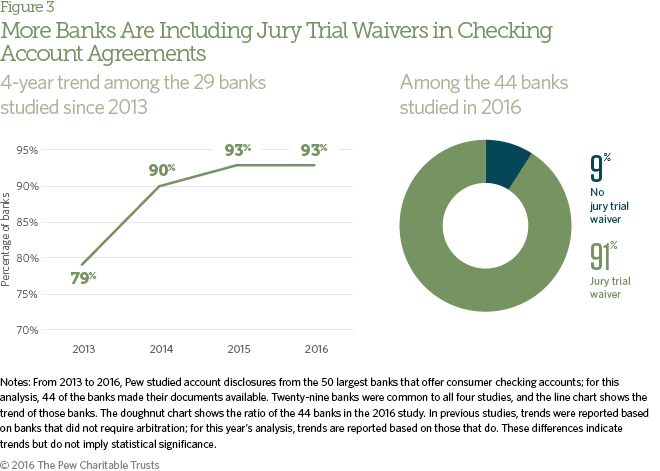 By definition, if a bank has a mandatory binding arbitration clause, customers must waive their right to a jury trial, but some banks without arbitration clauses still require customers to waive their right to a jury trial in favor of one heard by a judge. The percentage of banks with a jury trial waiver among the 29 banks common to Pew’s studies has risen from 79 percent to 93 percent since 2013. Almost all (91 percent) of the 44 banks studied in 2016 have jury trial waivers in their account agreements. 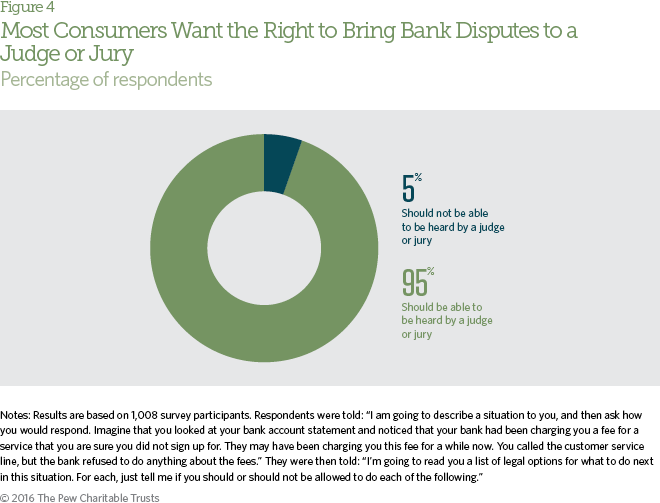 Ninety-five percent of consumers want to be able to have a dispute with their banks heard in court. 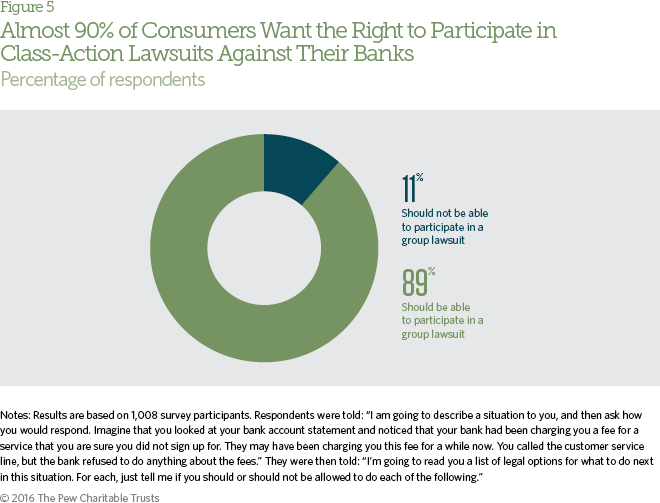 Almost 9 in 10 consumers want to be able to participate in a group lawsuit. Class-action lawsuits enable customers to join together to try to hold financial institutions accountable for injuries that may be small individually but amount to significant harm in the aggregate. The waivers deny consumers access to these remedies, leaving many with limited recourse to address low-dollar but systemic issues. 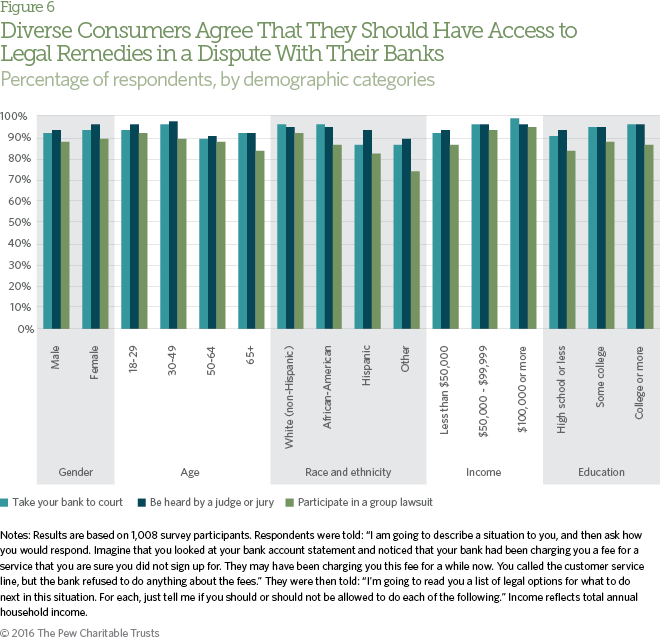 The high level of interest in access to legal options is consistent across demographic groups such as gender, age, race, income, and education. 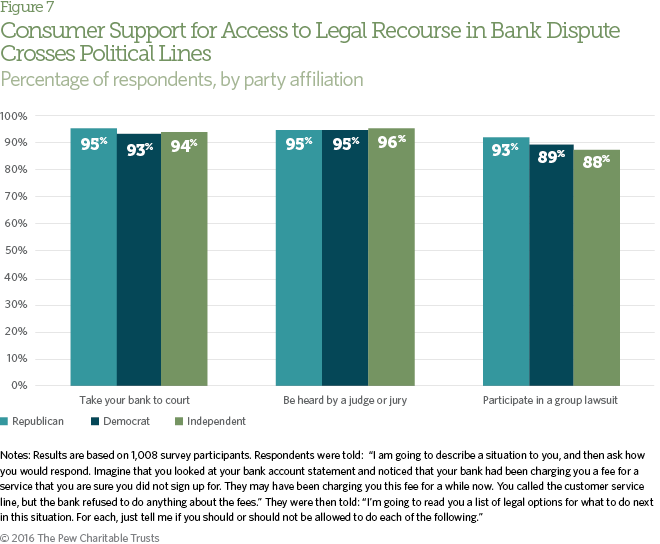 Consumers from all political persuasions overwhelmingly want access to legal options in dispute resolution with their banks. For instance, 93 percent of Republicans and 89 percent of Democrats want to be able to participate in a class action. 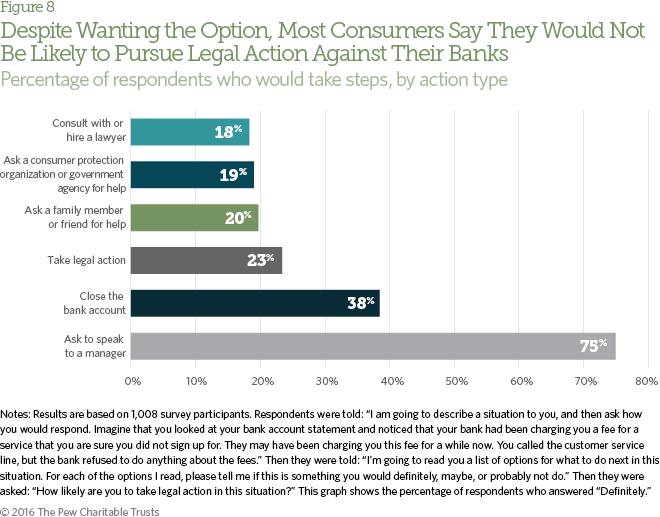 When faced with a hypothetical problem at their bank, most customers are willing to speak to a manager but not to take further action. Only 38 percent of respondents say they would close their account, and less than 20 percent would contact a government agency or seek out legal advice. Even though consumers want to leave their dispute resolution options open, only 23 percent say they would take legal action if a dispute arose. 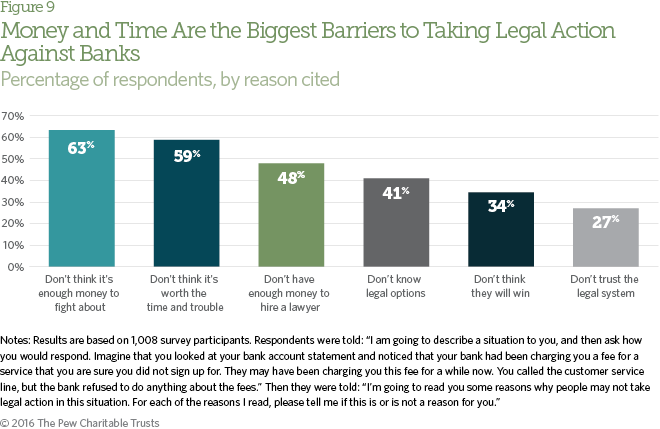 Only 23 percent of consumers say that, if faced with an issue at their bank, they would definitely take legal action; when asked why they might not pursue a case, most cite money and time as the leading reasons. Sixty-three percent of consumers say that the amount of money in a dispute over fees charged on their checking accounts is probably not enough to worry about; 59 percent say that it would not be worth their time. Almost half say they don’t have the money to hire a lawyer. Notably, only one-third say they don’t think they will win, and about a quarter say they don’t trust the legal system.

Pew’s research shows that, although most consumers say they would not take legal action on their own if they had a dispute with their banks, they believe that banks should not be able to restrict their access to the courts. However, bank arbitration agreements routinely bar customers from bringing independent legal action or participating in class-action lawsuits, which can involve thousands or even millions of claimants and enable them to hold companies accountable for illegal actions that might be individually small but are significant in the aggregate.

On May 5, 2016, the CFPB proposed rules that would prohibit class-action waivers in mandatory arbitration clauses included in checking account agreements and other consumer financial product contracts. The draft regulation is informed by the bureau’s March 2015 comprehensive arbitration study, which was required by the Dodd-Frank Act. The CFPB’s study and this poll make clear that, in most cases, consumers would not take individual legal actions over a dispute but want the right to join class actions to hold companies accountable.

Consumers should be able to pursue legal action against their banks. Class action, in particular, is a cost-effective dispute resolution option for groups of consumers with small claims. Pew urges the CFPB to move forward expeditiously with these new regulations.

Pew studied the disclosures of 44 of the 50 largest banks based on domestic deposit volume as tabulated in June 2015 by the Federal Deposit Insurance Corp. Banks that did not offer checking accounts were excluded, and subsidiaries and affiliated institutions were grouped with their parent or with the largest affiliated bank. Each bank’s basic checking account was used for the analysis. The basic account that provided checks and debit cards was defined as the cheapest account available to all consumers—not a specialty account for students, seniors, or the military—and one that was not online only if branch banking was available. When a bank’s terms differed by state, Pew examined accounts in the state where the bank held the plurality of its deposits by volume.

From 2015 to 2016, Pew examined the disclosure boxes, fee schedules, and account agreements for each bank. These are the documents that prospective checking account customers rely on when choosing among financial institutions. Using these methods, Pew was able to obtain full documentation for 44 of the 50 largest banks. Banks that provided only some of their disclosures were omitted.

On behalf of The Pew Charitable Trusts, Social Science Research Solutions (SSRS) conducted a nationally representative random-digit-dialing telephone survey of 1,008 adults on their attitudes toward arbitration and dispute resolution alternatives. Interviews were conducted Nov. 24-29, 2015. The margin of sampling error including the design effect is plus or minus 3.8 percentage points. SSRS conducted 504 interviews via cellphone and 38 in Spanish.6

Customers Want to Join Together to Hold Financial Institutions Accountable

In a recent survey, The Pew Charitable Trusts asked consumers their opinions about mandatory binding arbitration. One issue in particular rankles them and is now under scrutiny by regulators: the ubiquitous inclusion in arbitration agreements of language that bars customers from pursuing their claims against a financial services company as part of a class action.

Many contracts for credit cards, checking accounts, prepaid cards, and other financial products include mandatory arbitration clauses, which forbid consumers from settling disputes in court, either individually or as part of a group (or class action), and require them instead to participate in arbitration. In October 2015, the Consumer Financial Protection Bureau announced that it was considering a ban on mandatory arbitration agreements that prohibit class actions. In light of our research showing that these clauses inflict harm by limiting customers&rsquo; recourse, Pew urges the CFPB to institute the ban promptly.