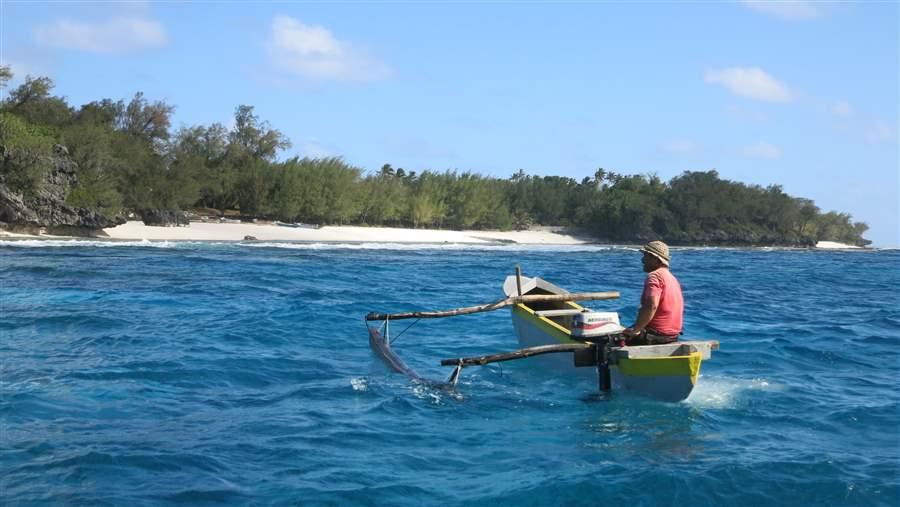 The five inhabited islands of French Polynesia’s Austral archipelago—Rimatara, Rurutu, Tubuai, Raivavae, and Rapa—have come together to propose to the central government in Tahiti that a large, highly protected marine reserve be created in their waters. If approved by the government, the reserve could be the largest in the world at a potential 1 million square kilometers.

The marine sanctuary would be named Rāhui Nui nō Tuha’a Pae, or “the big rāhui of the Austral Islands,” a Tahitian reference to the traditional Polynesian practice of restricting access to an area or resource to conserve it. Establishing this sanctuary would help promote the unique culture and heritage of the Austral Islands far beyond the boundaries of the archipelago—and beyond the waters of French Polynesia.

This issue brief provides an overview of the formal proposal submitted to the government of French Polynesia by the municipalities of the Austral Islands with support from the Federation of the Polynesian Environmental Associations (FAPE), and Pew's Global Ocean Legacy campaign. The recommendations emerged from a series of consultations that included broad public participation throughout the islands, which are home to some 6,800 people. They are intended to help the government—which has jurisdiction over the management and protection of the territory’s exclusive economic zone (EEZ)—develop a workable and effective plan to create a marine reserve.

The southernmost archipelago in French Polynesia, the Austral Islands enjoy exceptional ecosystems. Because of the islands’ isolation and unique climatic and geological characteristics, the waters are rich with life, including many species found nowhere else on Earth. Rapa alone hosts 112 coral species, 150 algae species, and 383 species of coastal fish. The research shows 455 mollusk species living throughout Austral waters, 20 percent of which are found only there. More than 60 pelagic fish species can be found in the open ocean. Austral waters provide homes for three species of sea turtles, 10 species of marine mammals, 14 species of sharks, and four species of rays. The islands have the most diverse array of marine birds in French Polynesia, and the crystal waters off Rurutu are among the best places on the planet to see humpback whales.

Fishing plays a major role in the local economy. More than 1,500 fishermen work in lagoon and coastal waters, primarily using traditional methods to cover local food needs. No tuna boats are based in the archipelago. The longline fishery remains undeveloped, largely because of the harsh weather conditions and the distance from Tahiti. Since 2004, the total fishing effort of Polynesian longline fishing vessels in Austral waters (south of 22 degrees south) has amounted to about 90 tons a year and represents on average only 1.7 percent of French Polynesia’s overall catch.

The Austral Islands have a remarkable cultural heritage that includes the continued use of the rāhui, an essential component of Polynesian culture, particularly on the island of Rapa. Raivavae is one of the only Pacific islands where people continue to build traditional pirogues from mango wood stitched together with coconut fiber strings. And local legends say the island of Tubuai represents the head of an octopus, with tentacles reaching to the other Austral Islands. 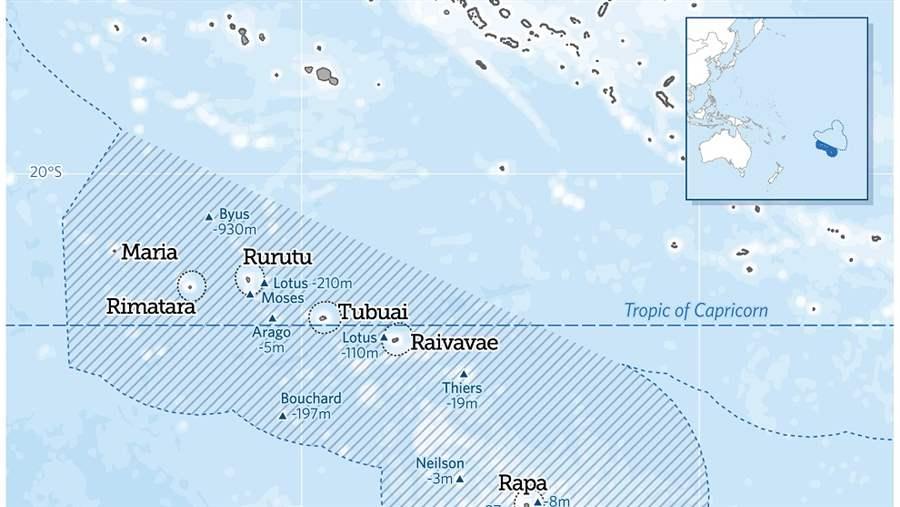 For the full proposal, in French, please visit: http://issuu.com/rahuinuinotuhaapae.

For more information about Global Ocean Legacy, a project of Pew and its partners, please visit: globaloceanlegacy.org.

A time to act

The world’s oceans are in crisis. Nearly 90 percent of global fish stocks are depleted, overexploited, or fully exploited to the point of not being able to replenish their populations.1 Because of intense pressure from international fisheries, the biomass of bigeye tuna in the South Pacific is down 84 percent from historic levels, while yellowfin tuna populations have declined 62 percent and albacore tuna about 60 percent from their natural levels.2

Numerous studies show that marine reserves, within which industrial fishing and mining are prohibited, bring ecological benefits beyond their boundaries. Fishermen often see long-lasting gains because the biomass of coastal and pelagic fish species increases. That boosts the marine population outside the reserve where fishing continues.3 By ensuring vibrant, healthy waters, marine reserves also can help attract ecotourists and bolster local economies.

Around the world, only about 2 percent of the ocean is highly protected; many scientists and the International Union for Conservation of Nature recommend strict protections for at least 30 percent.4 Over the past decade, many large marine sanctuaries have been created or announced by governments, particularly in the Pacific Ocean. Because of efforts in Hawaii, Australia, New Zealand, Chile’s Easter Island, Palau, Kiribati, and the U.K. overseas territory of Pitcairn, more than 5 million square kilometers have been set aside for protection in recent years. These waters form a vast network of marine sanctuaries.

French Polynesia pledged in 2013 to protect at least 20 percent of its waters by 2020. In 2014, the municipal councils of the inhabited Austral Islands approved a resolution calling for “creation of a large marine reserve in the Australs’ EEZ beyond traditional fishing areas.” The government in Tahiti heard this call and announced plans in November to create a marine protected area there that would encompass about 1 million square kilometers. Numerous policy documents released since mention this objective, including French Polynesia’s Plan on Climate and Energy and the National Assembly’s report on climate change.

In May 2014, French Polynesia invited Pew to help conduct a detailed study of the Australs’ marine environment. The scientific work, which included the efforts of 30 local and international experts, resulted in a 350-page volume that was compiled and reviewed by Pew and the Institute for Pacific Coral Reefs—Centre for Island Research and Observatory of the Environment (IRCP-CRIOBE).5 The authors presented the findings at a public conference in Tahiti and at an event on World Oceans Day, June 8, 2015. They also delivered the study to the territory’s government.

At the same time, the Austral municipalities, Pew, and FAPE consulted with island residents to gather their insights and priorities for a coordinated management strategy. The island municipalities organized 62 meetings with local councils and the public. More than 500 people took part in the process, including elected officials and representatives of fishing, tourism, education, and religious entities.

Members of the public could comment at workshops in each village on objectives for the proposed marine reserve and how it should be structured. The municipalities of Rapa, Raivavae, Tubuai, and Rimatara and part of the municipal council of Rurutu reviewed and endorsed the summary of these consultations, which is included in the full proposal to the French Polynesian government.

In Tahiti, interested parties, including representatives from tuna fishing businesses, government agencies, civic associations, the private sector, schools, and the general public, took part in meetings and events to stay informed and offer their perspectives. As a result, the Austral Islands marine reserve project presented in the official proposal and this summary document is the fruit of a genuine public debate and was born from a participatory and collaborative process.

In the extensive series of consultations, the islanders identified four main objectives for the proposed marine reserve. It should:

To meet the stated objectives, islanders say the marine reserve plan should include the following measures.

Conscious of the many threats facing the ocean and the decline of global fishing resources, the communities of the Austral Islands have joined together to seek protections for their waters and to create what could become the largest marine reserve in the world. The islanders want their ocean to remain a sanctuary full of fish to benefit future generations, both on the Austral Islands and across French Polynesia.

Considering the islands’ long history with the practice of rāhui, this ambitious undertaking would allow the archipelago to maintain its pioneering role in sustainable management of marine resources. It also would help French Polynesia confirm its status as a major actor in efforts to protect the world’s oceans. 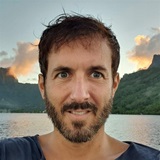 The five inhabited islands of French Polynesia&rsquo;s Austral archipelago&mdash;Rimatara, Rurutu, Tubuai, Raivavae, and Rapa&mdash;have come together to propose to the central government in Tahiti that a large, highly protected marine reserve be created in their waters.