This brief was updated in July 2016 to reflect the most recent scientific data and fishery management policies.

In 2007, the Gulf of Mexico Fishery Management Council implemented a rebuilding plan for red snapper that included scientifically sound catch limits to put this treasured fish on the road to recovery. Now, congressional proposals to transfer governance of red snapper from the council to the five Gulf states threaten to undermine these federally required measures, halt population growth trends, and risk the species’ ongoing recovery from decades of overfishing, which ended in 2009.

The Gulf red snapper population is not yet fully healthy, and a transfer of its management to the states could mean the dismantling of a successful commercial-fishing program and other innovative solutions developed by the council. It is also unclear whether the states—Alabama, Florida, Louisiana, Mississippi, and Texas—would have the funding and expertise necessary to scientifically assess and protect the health of red snapper, a species found mostly in federal waters.

The council, which is made up of commercial and recreational fishermen, scientists, state wildlife managers, and the National Oceanic and Atmospheric Administration’s National Marine Fisheries Service (NOAA Fisheries), has set a goal of full recovery by 2032. (See Figure 1.)

Keeping the recovery plan on course will continue to yield an increasing bounty of red snapper to support charter boat captains who rely on fishing tourism; recreational anglers who fish for red snapper as a main offshore target; and commercial fishermen who provide it for chefs, restaurants, and markets across the country. Coastal communities benefit economically from these activities and have a vested interest in ensuring the population’s recovery. 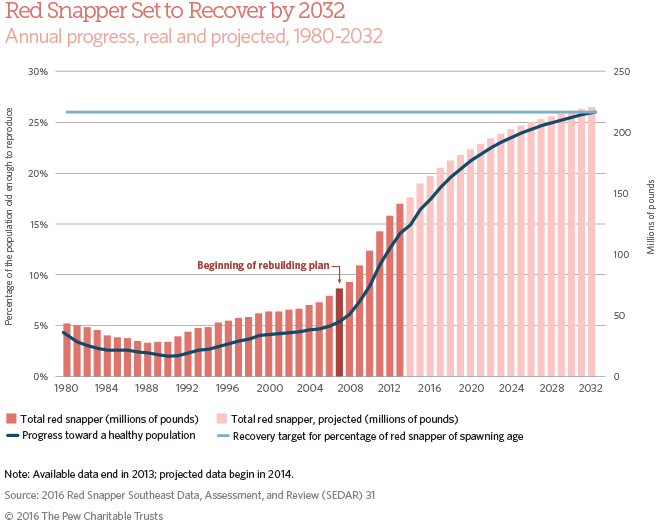 The hallmarks of a healthy red snapper population are increasing numbers of bigger fish and a broad range of ages. Although fishermen and scientists are reporting more red snapper in the Gulf, the population of older fish is still not sufficient. Red snapper can live past age 50, but the latest studies indicate that too few are older than 10—the beginning of the species’ best spawning years, when fish produce exponentially more viable eggs than do their younger counterparts. (See Figure 2.) A full recovery takes time, and relaxing conservation standards could reverse recent progress and bring a return of the overfishing that decimated this population. 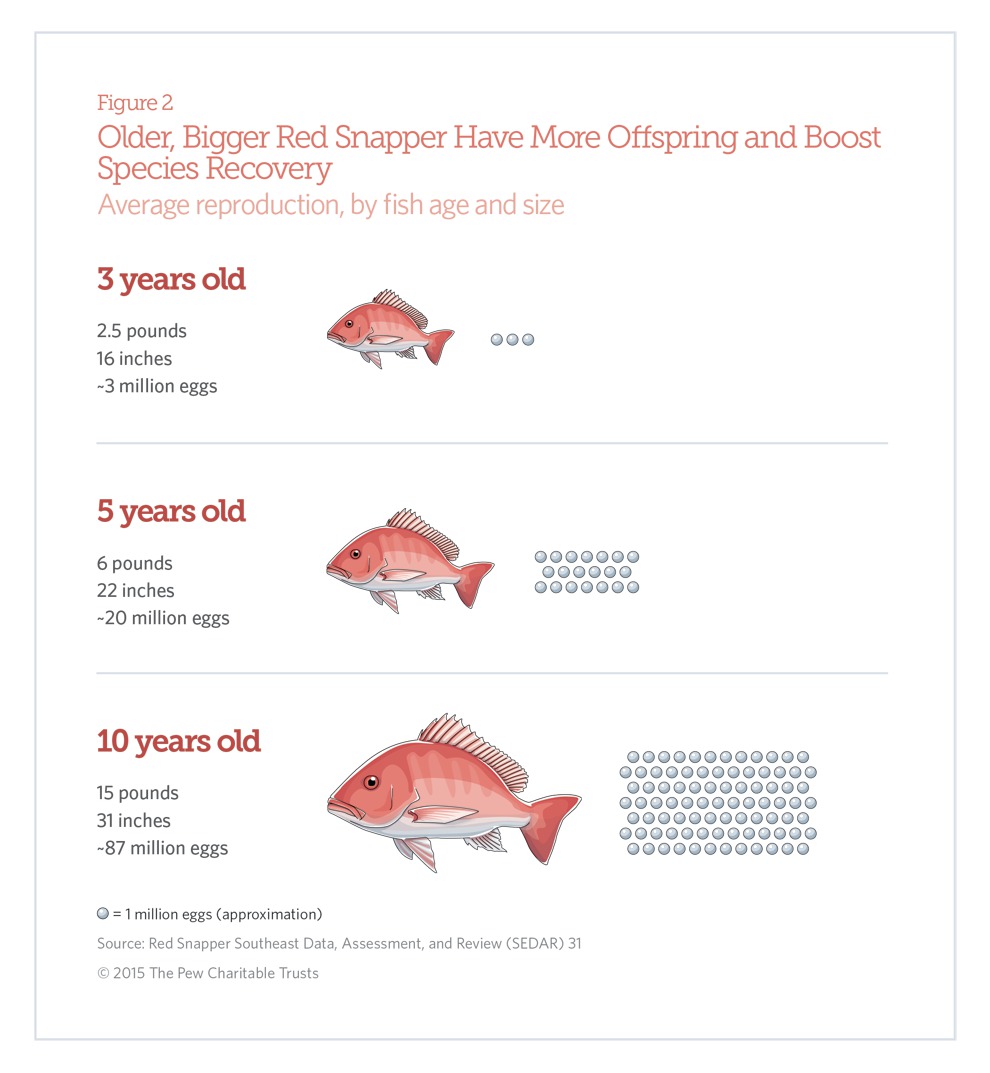 Gulf red snapper are getting bigger and spreading out geographically, which means the recreational catch limit, measured in pounds, is being met faster because more anglers are catching bigger snapper. Recreational fishermen, who see more and more red snapper in the water, have grown frustrated that the recreational fishing season is not longer. They have asked their states to allow them to catch more fish in state waters, and all five have complied in recent years.

The Gulf council’s recovery plan regulates the amount of red snapper that can be caught annually in the Gulf as a whole. Based on this annual catch limit, the number of days for the federal recreational fishing season is determined in part by state season lengths, the number of fish allotted per trip, the average weight of the fish landed, and how fast they are caught.

States can set their own seasons in Gulf waters they control, which in some cases extend up to 9 miles offshore. The council and NOAA Fisheries set the federal season for the rest of the Gulf in U.S. waters. So, when state seasons are longer, the result is fewer fishing days in federal waters, which can put some charter fishing operators and recreational anglers at a disadvantage.

For example, customers on federally permitted charter boats are prohibited from keeping red snapper that they catch in state waters once the federal season is closed, even if the state season is still open. These boats cater to tourists, so hotels, restaurants, and other coastal businesses also feel the loss when their season is cut short. Additionally, the shorter federal season hurts individual anglers in some areas, such as southwestern Florida, where red snapper are found more often far offshore in federal waters than in closer-to-shore waters under state control.

In 2007, when the council implemented the recovery plan, it also began a specially designed program that included quotas for individual commercial fishermen—a system deemed effective at ensuring that the total commercial catch remains at a level that is sustainable for the health of the red snapper population. The commercial catch limit has increased nearly every year since 2009, and the price of red snapper has risen steadily. Commercial fishermen worry that if red snapper management changes hands, the individual quota program could be dismantled. 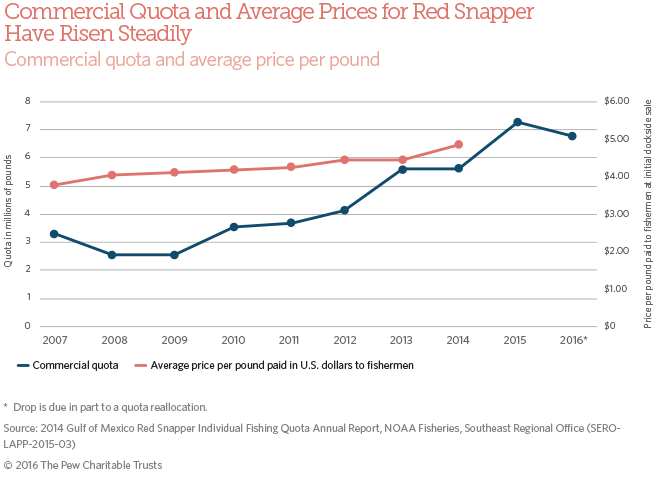 Council’s innovative solutions could work for everyone

The Gulf council is working to resolve perceived disparities between commercial and recreational fishermen while keeping total red snapper fishing under conservation limits, but for its plans to succeed, it must maintain jurisdiction over the fishery. The council’s efforts to date include:

Gulf red snapper are on the road to recovery. Fishermen, scientists, and conservation organizations will continue to work with the Gulf of Mexico Fishery Management Council and NOAA Fisheries to increase accountability and flexibility for all. Existing recovery plans are working, and staying the course will deliver a healthy red snapper population that will support abundant fishing, seafood, and recreational opportunities for generations to come.