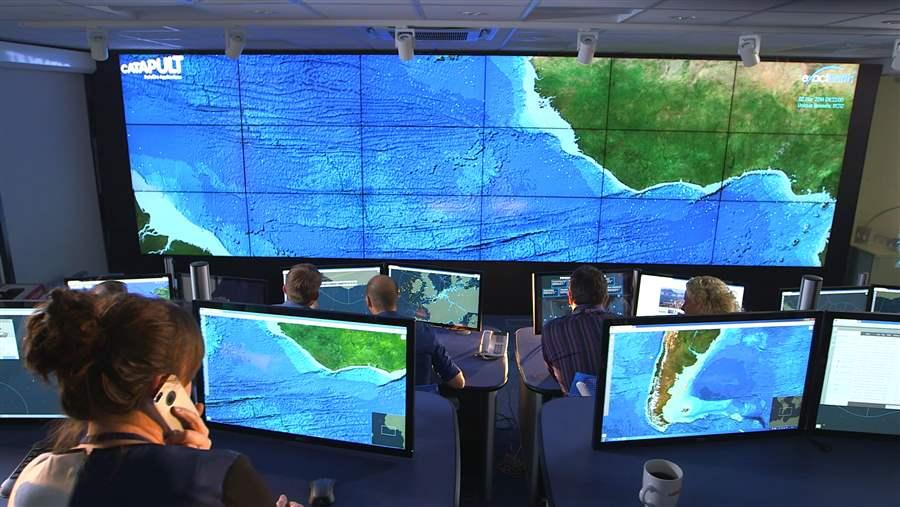 Illegal fishing is a global concern that threatens the long-term health of our oceans, worsens the impact of overfishing on critical marine ecosystems, and costs up to an estimated $23.5 billion annually. It accounts for 1 of every 5 fish taken from the world’s seas and jeopardizes the livelihoods of tens of millions of people who depend on the oceans’ resources.

Traditionally, efforts to clamp down on illegal fishing have relied on aircraft and patrol vessels. But they are often prohibitively expensive for even the richest of nations, and the ocean is too vast for surveillance and enforcement at sea to be truly effective by itself. Protecting important marine areas, especially the reserves that guard some of Earth’s most pristine ecosystems, requires a new approach and 21st-century technology.

To help meet this challenge, The Pew Charitable Trusts has partnered with the Satellite Applications Catapult to pioneer Project Eyes on the Seas, a cutting-edge technology platform that combines satellite monitoring and imagery data with other information, such as fishing vessel databases and oceanographic data, to help authorities detect suspicious fishing activity.

What makes the system distinctive is that it can synthesize and analyze multiple layers of data in near real time to monitor and identify suspicious vessels around the globe. The automated system then alerts authorities so they can investigate and take action.

The Eyes on the Seas system is designed to be a cost-effective global fisheries monitoring and enforcement tool for governments around the world, including the most resource-poor enforcement agencies, to monitor and detect illegal fishing and related activities.