After successful adult corrections reforms in 2011, Kentucky adopted comprehensive legislation in 2014 that was based on recommendations from a bipartisan, interbranch task force. Reforms enacted through Senate Bill 200 are expected to save Kentucky taxpayers as much as $24 million over five years while protecting public safety, holding juvenile offenders accountable for their actions, and improving outcomes for these youth and their families.

Kentucky spends a significant amount of money to send low-level status and public offenders to out-of-home residential placements. More than half of the $102 million budget of the Department of Juvenile Justice (DJJ) is spent on secure and nonsecure residential facilities, where the majority of beds cost $87,000 per year. In addition, the Department for Community Based Services spent an estimated $6 million in fiscal year 2012 for out-of-home placement of status offenders.

The task force developed recommendations to focus expensive out-of-home facilities on the most serious offenders. Incorporated into S.B. 200, the reforms restrict the commitment of lower-level offenders and how long they may be placed out-of-home; increase and strengthen evidence-based programs; create a fiscal incentive program; and establish an Oversight Council. S.B. 200 passed both houses of the Legislature and was signed into law by Governor Steve Beshear in April 2014.

The reforms are projected to reduce DJJ’s out-of-home population by more than one-third. The law also creates an enhanced pre-court process that will likely reduce the number of status and public offenders entering the court system. The reforms are expected to save Kentucky as much as $24 million over five years (Figure 1.) These savings may then be reinvested to expand community-based programs and proven practices to improve outcomes for children and families. 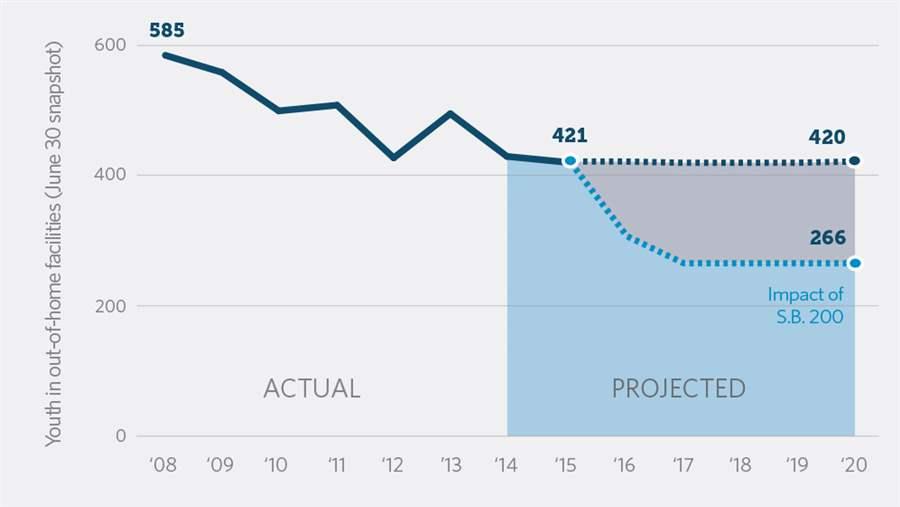 Kentucky stands to save up to $24 million over 5 years.