Medicare Part D plans (PDPs) are required to cover at least two drugs in each therapeutic class, defined as a group of drugs used to treat the same disease or condition. However, for six therapeutic classes PDPs are required to cover “all or substantially all” drugs.1 These are known as the protected classes, and include antiretrovirals (used to treat HIV), immunosuppressants (when used to prevent organ rejection), antidepressants, antipsychotics, anticonvulsant agents (used to treat epilepsy), and antineoplastics (used to treat cancer). While this requirement is intended to ensure a beneficiary’s broad access to all drugs in these protected classes, it may reduce the PDP’s ability to negotiate discounts for these drugs, leading to higher costs for Medicare and its beneficiaries.

While the protected classes are currently established in statute, they were originally developed under Medicare’s general authority to require adequate formularies in PDPs. In 2005, prior to the first year of the Part D program, Medicare released the Medicare Prescription Drug Benefit Manual,3 which provided instructions to PDPs on developing their formularies, created the protected classes policy, and identified the six classes for the first time. Medicare created the protected classes policy to ensure that beneficiaries with certain chronic conditions who were transitioning from Medicaid coverage to the Part D program would have uninterrupted access to their current drugs.4

In 2008, Congress revised the Part D statute to require Medicare to identify protected classes through the regulatory process;5 the 2005 identification was subregulatory guidance, not binding regulation. In 2009, Medicare issued initial regulations outlining a process to subsequently identify classes through binding regulation, but did not actually define any through that process.6 In 2010, Congress again revised the statute, requiring Medicare to recognize the six existing classes until Medicare finalized rule-making to identify protected classes.7

In 2014, Medicare issued a proposed rule to identify these classes. The agency would recognize a class as protected when:8

CMS proposed that this definition would remove the protected status from the antidepressants, antipsychotics, and immunosuppressants classes and projected a savings of $720 million over five years, including $420 million in 2019. These potential savings represent less than 0.4 percent of the $116 billion in projected Medicare Part D spending in 2019.9 Following opposition from many parties,10 Medicare did not finalize this proposed change, and the protected classes previously defined in statute remained in force.

Spending and generics use in protected classes 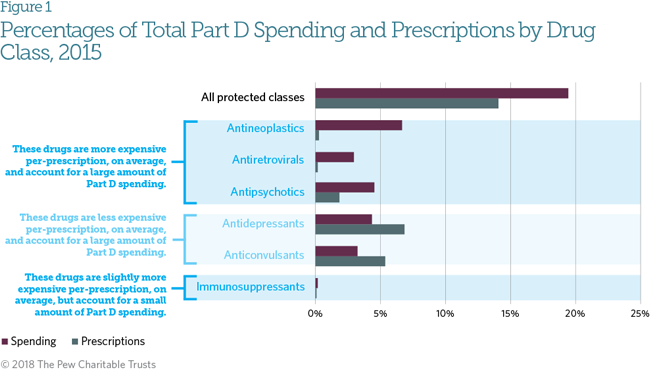 Protected classes currently have a higher overall rate of generic utilization than other drug classes (92 percent and 84 percent of prescriptions, respectively).13 Generic uptake has affected prices for these therapies. According to the Medicare Payment Advisory Commission (MedPAC), prices for protected-class drugs have increased at the same rate as all Part D drugs, and cumulative prices actually decreased by 16 percent between 2006 and 2013 due to generic substitution.14 MedPAC has concluded that “protected status does not appear to affect plan sponsors’ ability to encourage the use of generics.”15 Antiretrovirals are a notable outlier among protected classes. Ninety-one percent of these prescriptions are for branded drugs, accounting for 97 percent of spending in that class. While some generic antiretrovirals are available, federal clinical guidelines recommend the use of newer brand drugs based on effectiveness.16 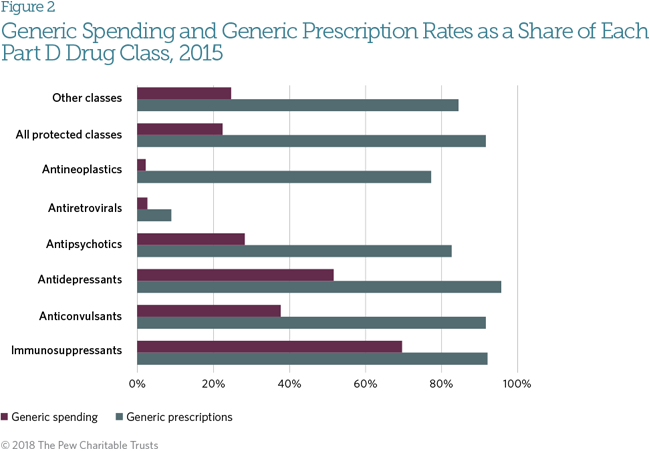 Rebates for protected classes drugs compared to other drugs

The drug spending estimates above consider only PDPs’ payments to pharmacies; after these payments, PDPs receive rebates to offset drug costs (typically limited to brand-name drugs). These rebates, in turn, reduce Part D premiums, though they generally do not reduce beneficiary out-of-pocket costs. Medicare provides limited information on the magnitude of rebates received. In 2014, plans received on average a 17.5 percent rebate on all Part D brand-name drugs.17 Among 40 drugs identified by Medicare as having high total spending, high per-user spending, or large price increases in 2014,18 the average rebate was 17.8 percent. Of these 40 drugs, about a third (13) were in protected classes and accounted for roughly one-third (30 percent) of the spending on those 40 drugs. As the rebates on these 40 drugs were consistent with rebates across all Part D brand-name drugs, this may suggest that rebates on protected-class drugs are consistent with other brand-name drugs. However, it does not preclude the possibility that plans could obtain higher-than-average rebates for these products if they had a greater ability to exclude them from coverage.

PDPs are generally required to cover brand-name drugs in a protected class when no generic equivalent is available, but they may exclude brand-name drugs from coverage when a generic equivalent is available.19 PDPs may also exclude extended-release formulations if an immediate-release formulation is available, and multiple formulations with the same route of administration are not required (e.g., both tablets and capsules of the same dosage are not required, but tablets and transdermal patches with the same dosage are). PDPs also have tools to manage drug use, such as prior authorization or requiring a patient to try another drug first (called “step therapy”). They can also subject drugs in protected classes to higher patient cost-sharing, which is usually achieved by placing the drug on a “specialty tier” in the PDP’s formulary. The ability to implement utilization management requirements and to place these drugs on specialty tiers may allow plans to negotiate discounts on them for more favorable access.

In at least one protected class, PDPs actually have more restrictive formularies than commercial health insurance plans, despite the protected class and other formulary protections.20 In 2013, commercial plans covered 80 percent of unique formulations in the anticonvulsant class (including both brand and generic formulations), while PDPs covered only 62 percent. While both insurer types covered nearly all generic formulations, commercial plans covered 76 percent of branded drugs, compared with only 46 percent coverage by PDPs, demonstrating that PDPs frequently use their ability to exclude branded drugs when a generic is available. PDPs also place anticonvulsants on higher tiers than do commercial plans. These findings suggest that the protected classes policy does not prevent PDPs from managing formularies consistent with commercial insurance plans.

Removing coverage requirements for some or all protected classes may provide PDPs with a greater ability to negotiate rebates when designing a drug benefit compared to their current abilities through utilization management and formulary placement. However, Medicare’s other formulary protections may limit PDPs’ ability to exclude a drug, even absent a protected class designation.

Outside of the protected classes, PDPs are required to cover at least two drugs per therapeutic class.21 PDPs are required to have a Pharmacy and Therapeutics Committee that issues binding recommendations on which drugs are included on the formulary, using a “clinical appropriateness” standard. Formularies are also reviewed by CMS to determine whether they are consistent with those in “widespread use.” These clinical appropriateness and widespread-use criteria limit PDPs’ ability to exclude drugs from the formulary regardless of protected class status.

If a protected class designation were removed, plans would gain additional negotiating power only for brandname drugs that could credibly be excluded from formularies under Medicare’s clinical appropriateness criteria. Within certain protected classes, many patients use brand-name drugs that do not have a generic alternative, indicating widespread clinical use that may inhibit PDPs’ ability to exclude these drugs from formularies. In 2015, 90 percent of Part D antiretroviral prescriptions and 22 percent of antineoplastic prescriptions were for brandname drugs with no generic alternatives. If clinical appropriateness criteria allow PDPs to exclude any of these drugs, PDPs may be able to negotiate additional rebates in these two classes.

However, other protected classes had low utilization of brand-name drugs without generic equivalents, limiting the potential savings from removing those drugs from formularies. For example, only 8 percent of antipsychotic and 7 percent of anticonvulsant prescriptions were for branded drugs with no generic alternatives, and these drugs comprised only 2 percent of the antidepressants used and less than 0.05 percent of the immunosuppressants used. Given this high level of generic use, savings from Medicare’s proposed elimination of protected class status for antidepressants, antipsychotics, and immunosuppressants may be minimal within the context of total program spending. However, if new brand-name drugs are introduced in one of these classes, the contribution to overall spending—and the potential savings—could increase.

When evaluating updates to protected class designations, policymakers should weigh the potential savings against the adequacy of other requirements designed to ensure appropriate access to medication. Lack of adequate access to medications can in some circumstances increase costs to other Medicare programs through increased hospitalizations from complications or increased physician visits to manage medications.22