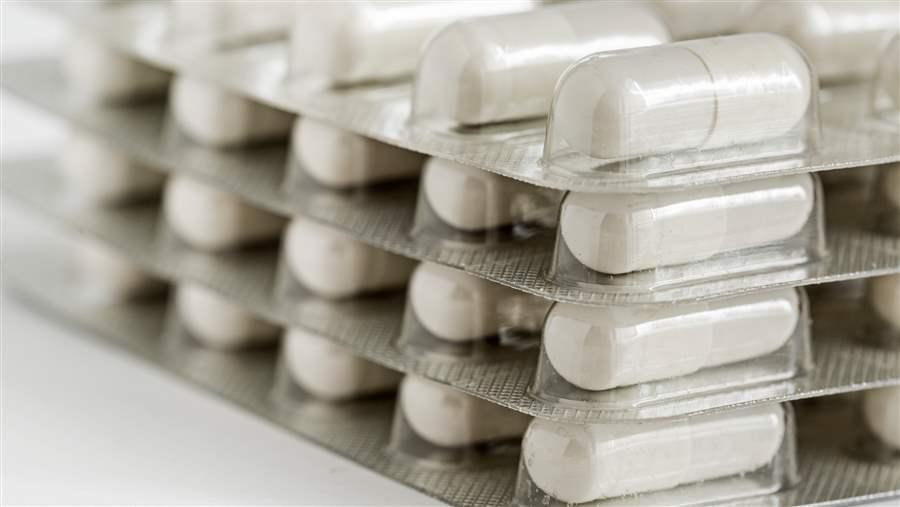 This is the second in a series of fact sheets summarizing many of these proposed policies, touching on topics such as competition, transparency, and Medicare Part B and D reforms. They will also evaluate the potential each policy has to manage drug spending and outline key issues for policymakers to consider.

Generic and biosimilar manufacturers, or drug developers,1 report that they have been unable to purchase samples of innovator drugs2 for their product development.3 Without access to these drugs, generic developers cannot conduct the testing required for Food and Drug Administration approval. They can sue brand companies for violating antitrust law, but this type of litigation can take years to conclude,4 and it can be difficult for generic developers to demonstrate that a brand developer’s actions caused harm to either them or consumers. As a result, patient access to generic drugs is delayed.

Generic developers assert that their ability to bring products to market is limited in three main ways:

Risk evaluation and mitigation strategies (REMS) are FDA-required management plans to help ensure that the benefits of certain prescription drugs outweigh their risks.5 As of May 2017, there are 71 different REMS in place for currently marketed medications.6 Many REMS simply require the distribution of information to the patient, but 42 have elements to assure safe use (ETASU).7 For example, an ETASU REMS may include a requirement that pharmacies, practitioners, or health care settings dispensing a high-risk drug be specially certified to handle the product, which limits the distribution of these drugs to qualified entities.

While ETASU REMS are intended to reduce specific serious risks listed in the labeling of the drug, generic developers may have difficulty acquiring samples of innovator drugs subject to these requirements, as the statute contains no provision to explicitly require makers of these drugs to sell product samples to generic developers. Current law prohibits drugmakers from using ETASU REMS to block or delay the approval of a generic drug application or to prevent a generic developer from participating in a shared ETASU REMS program with the innovator company.8 The law also provides FDA the authority to deem a drug misbranded or levy fines on brand drug developers in violation.9 However, the agency has not taken enforcement action against any manufacturer for violating these requirements.

If a generic developer encounters challenges in obtaining access to a drug subject to ETASU REMS, it can be difficult for FDA to determine that a brand developer is restricting access to the product in order to block or delay a generic application. In many cases, innovator drug developers raise patient safety concerns. In fact, FDA has stated that alleged abuses of REMS to delay or block competition would be best addressed by the Federal Trade Commission (FTC), to which it refers generic developer complaints about access to ETASU REMS products.10 The FTC has filed amicus briefs in private antitrust lawsuits to express its concern about potential REMS abuses,11 but it has never filed an antitrust claim against a manufacturer alleging this conduct.

In addition to the necessity for a generic manufacturer to obtain product samples for testing, a generic version of a drug with an ETASU REMS requirement is subject to the same safeguards as the original product. Innovator and generic developers of drugs with ETASU REMS are required to participate in a single, shared REMS protocol, unless FDA waives the requirement.14 However, some generic developers have raised concerns that innovator manufacturers make it difficult for them to participate in a joint REMS protocol.15 Patient access to these products can be delayed if the brand and generic manufacturers are unable to reach agreement on a shared REMS. By law, FDA may grant a waiver to the shared REMS requirement when 1) the burden of creating a single, shared system outweighs the benefits of such a system, taking into consideration the impact on health care providers, patients, the applicant for the abbreviated new drug application, and the holder of the reference drug product, or 2) when an aspect of the ETASU REMS is patent protected or is a trade secret and a generic developer is unable to obtain a license for its use.16 On occasion, FDA has extended approval to a generic with a separate REMS protocol, citing its statutory authority to waive the shared REMS requirement.17 One manufacturer has responded by suing FDA, arguing that the waiver granted by the agency did not meet statutory requirements,18 but withdrew the complaint soon thereafter.19

Lawmakers have proposed two different policies that could improve the ability of generic developers to acquire innovator drugs for product development. The Fair Access for Safe and Timely Generics (FAST Generics) Act of 2017 seeks to ensure that REMS protocols and restricted distribution networks are not used to deny access to samples of innovator drugs.20 Generic developers would be required to first receive authorization from FDA to obtain samples of ETASU REMS drugs. If testing of the product involves clinical trials, developers must submit a testing protocol that includes protections that will “provide an assurance of safety comparable” to that of the ETASU REMS of the innovator drug. After receiving FDA authorization, the generic developers would be entitled to purchase samples at a nondiscriminatory, commercially reasonable, market-based price from a drug wholesaler or other entity designated by the manufacturer of the REMS product. The request to purchase samples must be fulfilled within 30 days. In addition, the FAST Generics Act would improve generic developer access to samples of drugs not subject to REMS protocols by requiring brand manufacturers to sell sufficient quantities of non-REMS products to generic developers at market prices within 30 days of receiving a request.

Another proposal, the Creating and Restoring Equal Access to Equivalent Samples (CREATES) Act of 2017,21 would expedite legal review when generic developers sue innovator companies for withholding access to product samples. Instead of having to prove that an innovator company has violated antitrust law, a generic developer would only need to demonstrate that a manufacturer has not complied with the generic developer’s request to provide “sufficient quantities” of a drug for testing on “commercially reasonable, market-based terms.” In the case of a product with an ETASU REMS, the generic developer may not sue unless it has received authorization from FDA to purchase product samples for testing. Authorization would be obtained after submitting a request to the agency. For product testing that involves clinical trials, the generic developer would have to submit testing protocols that provide safety protections comparable to the REMS of the innovator drug as well as meet any other requirements established by FDA.

The CREATES Act would also allow a generic developer to establish its own ETASU REMS that uses “a different, comparable aspect of the elements to assure safe use,” rather than participate in a single, shared REMS with the innovator drug developer. However, FDA could require manufacturers to participate in a single, shared REMS if it determines that “no different, comparable aspect of elements to assure safe use could satisfy” the REMS safety requirements.

The Congressional Budget Office (CBO) estimated that the FAST Generics Act would generate $2.35 billion in savings over 10 years for the federal government,22 while the CREATES Act would generate $3.3 billion in federal savings over the same period.23 An analysis funded by the Association for Accessible Medicines, then known as the Generic Pharmaceutical Association, concluded, based on a 2014 survey of generic manufacturers to identify instances of restricted access, that there could potentially be $5.4 billion in annual savings, including $1.8 billion in savings for the federal government, if generic versions of REMS and non-REMS brand drugs available only through limited distribution were to immediately come to market.24

These analyses produce different estimates because they model slightly different policies. They may also diverge due to differences in underlying assumptions. A comparison of these assumptions is not possible, because the CBO analyses are not public. A critical assumption for producing any savings estimate is the amount of spending on drugs currently unavailable to generic developers due to REMS restrictions and other kinds of limited distribution. According to the survey of generic manufacturers mentioned above, 40 such medicines were identified. However, this number has not been independently verified. In fact, no other published research has systematically and transparently documented the extent to which REMS and other kinds of limited distribution have resulted in restricted access for generic developers. This makes it difficult to estimate potential savings from new policies. Nevertheless, the spending on some brand drugs available only through limited distribution is high. For example, Medicare spent over $2 billion in 2015 on Revlimid,25 a drug used to treat multiple myeloma that was approved by FDA on the condition that the manufacturer implement an ETASU REMS protocol.

Some experts have also raised concerns that new policies intended to improve generic developer access to innovator product samples could increase risks to patients.26 For example, the CREATES Act allows generic developers to obtain FDA authorization to purchase product samples for testing. To obtain authorization in cases where development and testing involve clinical trials, a generic developer would be required to show that its protocols provide safety protections that are “comparable to those” of existing brand REMS and that it meets any other requirements FDA establishes. Some experts believe that a standard that does not require the protocol to provide protections “equivalent” to the brand REMS may result in less rigorous safety protections for patients.27

While current proposals would not seek to reduce safety precautions for REMS drugs, policymakers may want to consider whether new approaches place unwarranted administrative and financial burdens on FDA. For example, requiring the agency to play a central role in mediating negotiations between manufacturers of innovator drugs and generic developers regarding the purchase of samples or the development of shared REMS protocols would likely be time-consuming and resource-intensive.

Another consideration is the trade-off between policies that would require a single, shared REMS compared with those that would allow for separate REMS protocols for brand and generic versions of a drug. In some cases, separate REMS programs may require pharmacies and prescribers to spend additional time enrolling in or training to participate in multiple REMS systems.28 This approach may be less efficient than mandating a single, shared REMS system.

However, a single, shared REMS protocol may be difficult to implement, especially if elements of the innovator product REMS are patent-protected. In such cases, policymakers could require brand developers to license underlying patents to the generic manufacturer.

It is important that generic developers comply with REMS standards, but the existence of a REMS program is not intended to impede generic development. Policies to remove unnecessary barriers would be beneficial. Negotiations on a shared REMS are complex and require agreement on several topics, including the design of the shared REMS, coordination of reporting, creation of standards for data collection, protocol for shared decision-making, and resolution of legal issues involving intellectual property and product liability. Furthermore, negotiations often involve multiple generic developers seeking to join a single, shared REMS with an innovator drug developer. Policies that impose specific conditions, such as the price at which a product sample must be sold, may constrain the ability of manufacturers to negotiate a mutually beneficial agreement, resulting in further delays in settlement and generic approvals.