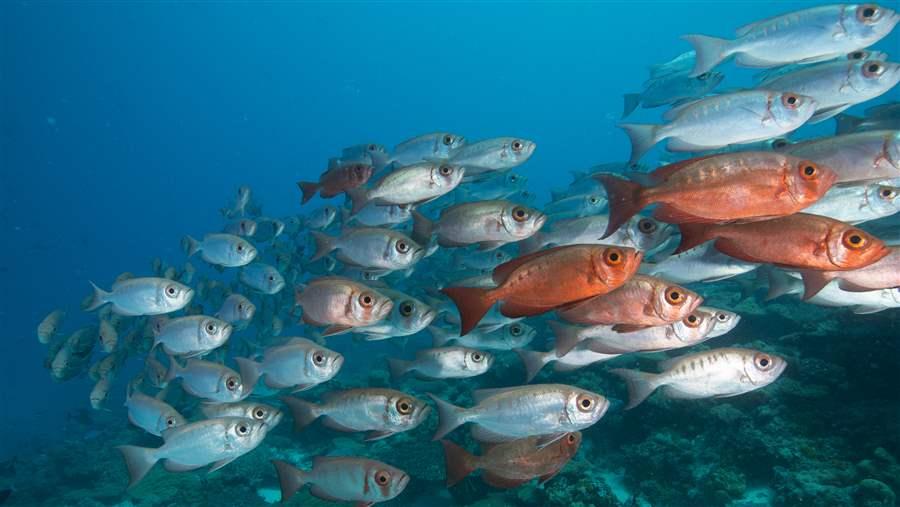 Almost 90 percent of fish stocks are fully exploited or overexploited.

From the heat of the equator to the deep chills of the North and South poles, the ocean binds the planet together. Making up more than 70 percent of the Earth’s surface, it is home to innumerable species great and small and is a critical source of food that also provides tens of billions of dollars in economic benefits to countless stakeholders.

But the ocean as we know it is increasingly at risk: Almost 90 percent of fish stocks are fully exploited or overexploited.1 Deep-sea mining could start within the next decade and potentially cause extensive environmental damage. Marine debris is polluting massive areas, and carbon dioxide emissions are making the world’s waters warmer and more acidic.2

Marine protected areas (MPAs), particularly fully protected marine reserves where all fishing and other extractive or damaging uses are banned, can help safeguard the ocean from many human activities, conserve species and habitats, and build ecosystem resilience.

The United Nations’ Convention on Biological Diversity (CBD) in 2010 set a target to conserve at least 10 percent of coastal and marine areas by 2020 (known as Aichi Biodiversity Target 11), and in 2015 the UN also adopted this percentage as part of its Sustainable Development Goals. But the recommendation from the “Promise of Sydney” outcome document from the 2014 World Parks Congress is that governments set aside at least 30 percent of marine habitat in MPAs, and recent science has backed up this larger target number.

“Effective Coverage Targets for Ocean Protection,” a 2016 review of previous studies on MPAs, published in the peer-reviewed journal Conservation Letters, found that evidence supports conservation for at least 30 percent of the ocean in MPAs in order to protect biodiversity, preserve ecosystem services, and achieve socioeconomic priorities.3

With the theme “Planet at the Crossroads,” this year’s IUCN World Conservation Congress has an opportunity to encourage action to protect 30 percent of the world’s ocean. Motion 53 urges States “to include at least 30 percent of each marine habitat in a network of MPAs with the ultimate aim of creating a fully sustainable ocean, at least 30 percent of which has no extractive activities,” by 2030.

Achieving this 30 percent goal could be accomplished in a variety of ways. For example, by:

Eliminating harmful human activities in more of the ocean can help build resilience to climate change, boost fisheries productivity, and help protect traditional cultures closely linked to the sea. At the same time, these efforts help to conserve valuable biodiversity.

Members of the IUCN World Conservation Congress should adopt Motion 53 and encourage all governments to protect 30 percent of the ocean—in both State waters and on the high seas—to help ensure the future health of our oceans.

1. Food and Agriculture Organization of the United Nations, “The State of World Fisheries and Aquaculture: Contributing to Food Security and Nutrition for All” (2016), http://www.fao.org/3/a-i5555e.pdf.