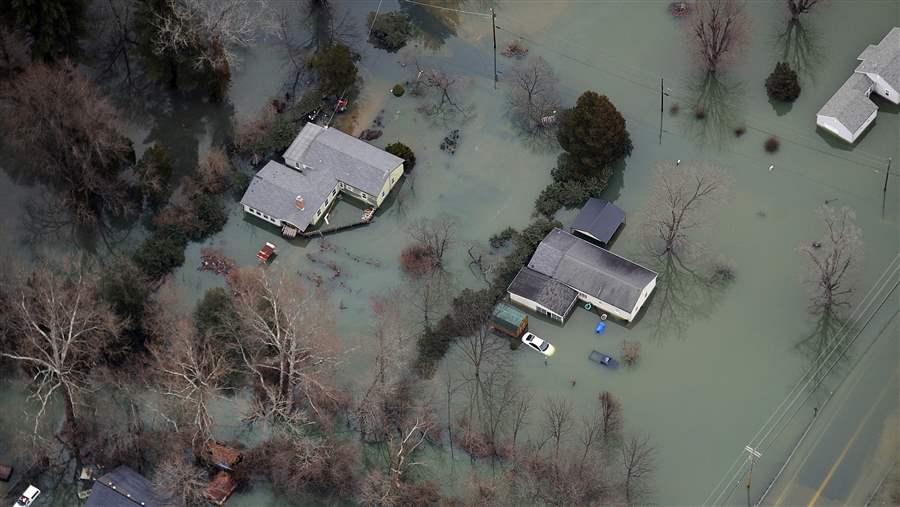 The National Flood Insurance Program (NFIP), created in 1968, provides federally backed coverage for homeowners and small businesses in more than 22,000 flood-prone communities across the United States. Established to offset a lack of private sector flood insurance and to help reduce federal spending on disaster response and rebuilding, the NFIP now has more than 5 million policies.1

Governed by congressional mandates and administered by the Federal Emergency Management Agency (FEMA), the program provides coverage to a home or business in a participating community, even after multiple losses. Communities elect to join the NFIP and adopt flood plain management rules to obtain lower-cost insurance rates for the homes and businesses in their areas. Properties built before a community joined the NFIP, and those included in a flood map after topographical or development changes prompted creation or expansion of a federal flood zone, are eligible for insurance rates that FEMA estimates may be 45 to 50 percent below a full-risk rate. As a result, taxpayers and policyholders with structures built to higher standards or outside of flood-hazard areas subsidize those properties.2

Flooding is the fastest-growing and most-costly natural disaster in the United States, and federal legislators should act to better protect ratepayers and taxpayers.

In its oversight role, Congress has set limits on rate increases and directed the program to borrow from the U.S. Treasury rather than build up capital to respond to catastrophic storms or flood events. Then, in 2012, when the program’s debt exceeded $17 billion, Congress authorized fee collection from policyholders in an effort to develop a contingency fund. But those efforts have been inadequate to address mounting claims and losses. The program’s debt has ballooned to nearly $24 billion, and its borrowing limit—a congressionally established ceiling for Treasury-provided funds— has reached $30.4 billion. Experts estimate that repayment of the debt would require decades free of catastrophic storms. Citing the program’s importance, financial instability, and predicted future risk, the Government Accountability Office has included the NFIP on its yearly list of high-risk government programs since 2006.3

In 2012, Congress passed the Biggert-Waters Flood Insurance Reform Act, which attempted to put the NFIP on stronger financial footing by phasing in insurance rate increases to reflect actual risk for some of the most heavily subsidized properties.4 However, two years later Congress rolled back many of the provisions in response to concern from policyholders about the rising cost of premiums. The 2014 Homeowner Flood Insurance Affordability Act provided refunds to some policyholders who had incurred large premium increases, allowed subsidized rates to convey when properties are sold, and capped rate increases for individual homeowners.5

The NFIP is due to be reauthorized in 2017, which presents Congress with an opportunity to make needed changes. Flooding is the fastest-growing and most-costly natural disaster in the United States, and federal legislators should act to better protect ratepayers and taxpayers by: