Over the past three decades, imprisonment has become the dominant sanction in the federal criminal justice system. Nine in 10 federal offenders received prison sentences in 2014, up from less than half in 1980, as the use of probation declined steadily.1 (See Figure 1.) Federal courts sentenced 2,300 fewer offenders to probation in 2014 than in 1980, even though their caseload nearly tripled during that span.2

Changes in the kinds of offenses and offenders prosecuted in federal court may have contributed to the shift toward prison and away from probation.3 But sentencing policies established during the 1980s and 1990s also played an important role by mandating prison time for many offenses for which probation had routinely been ordered in the past.4 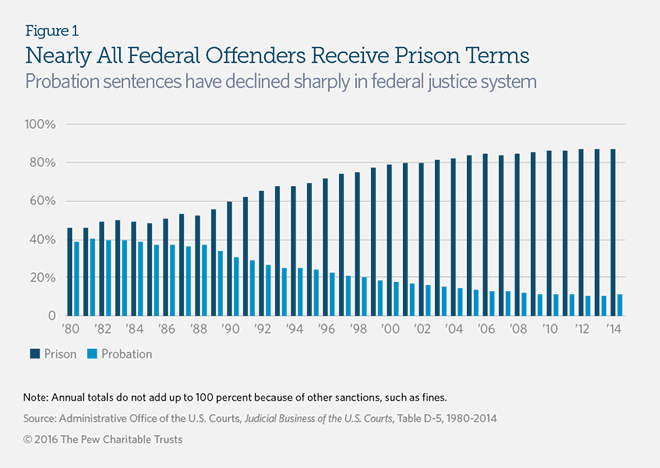 Sentencing laws and guidelines reduced the use of probation

Congress increased imprisonment and decreased the use of probation in several ways. During the 1980s and 1990s, for example, lawmakers enacted dozens of laws prohibiting probation and requiring prison terms for many common federal crimes, including drug trafficking and illegal firearms possession.5

In 1984, Congress created the U.S. Sentencing Commission, an independent agency within the judicial branch, and charged it with establishing guidelines that federal judges were required to follow during sentencing. The guidelines, which were intended to promote consistency in federal criminal penalties and took effect in November 1987, mandated imprisonment for a variety of offenses—including fraud, embezzlement, and tax evasion—for which probation was a routine sanction in the past.6

In a 2005 ruling, the U.S. Supreme Court deemed the guidelines “advisory,” but their effects remain evident: More than three-quarters of federal fraud offenders, for instance, received prison terms in 2014, compared with less than half in 1980.7