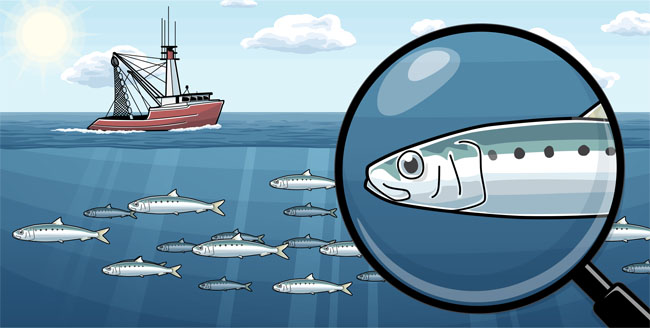 A new study shows for the first time that fishing likely worsens population collapses in a group of small but important species known as forage fish.1 Some of the largest fisheries in the world target forage fish, such as anchovies and sardines. These “baitfish” are also a key source of food for larger marine animals, including tuna, salmon, seabirds, and whales.

Scientists have long known about wide fluctuations in the abundance of forage fish, including the occasional population collapse. But they had not figured out whether collapses were entirely natural or were related to fishing.

Pew marine fellow Tim Essington of the University of Washington and his colleagues reviewed a large global data set of 55 forage fish stocks. Of these, 27 had collapsed at some point, meaning that they had fallen to a quarter or less of their average biomass. To investigate whether fishing was involved, the researchers asked two questions.

First, what was happening before and during the collapse? They found that fishing was particularly intense, about 50 to 200 percent higher than the average rate. (See Figure 1.) The population’s growth rate was plummeting at the same time, but this drop could explain only a small number of the collapses. 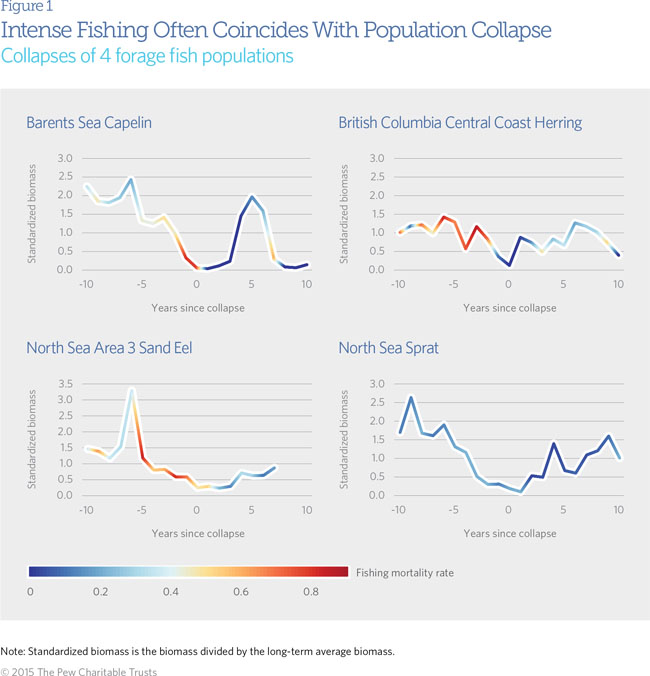 That pattern suggests that fishing is triggering or exacerbating collapses, but it is only one piece of evidence. So the researchers posed a second question: Do these collapses follow a pattern that would be expected as part of a natural cycle?

One way to answer that would be to compare the forage fish stocks with other stocks that are not fished. However, no reliable, long-term data exist to track the abundance of unfished stocks.

The researchers instead compared the forage fish fluctuations to simulations of natural, random fluctuations. To generate these simulations, they used the magnitudes and frequencies of fluctuation in each of the 55 stocks in the data set.

They produced 1,000 simulations based on the assumption that the 55 stocks fluctuated randomly, but with the same amplitude and frequency observed in the real data. They found that collapses were more common in the real stocks than in 97 percent of the simulations, leading them to conclude that fishing is a likely contributor to forage fish collapses.

Forage fish eventually rebound, but the collapses deprive other species of food and fishermen of income for as long as the population is depressed.

As with other studies, this research suggests that precautionary management may be particularly important with forage fish. But this study went further, using simulations to look at a specific management strategy: suspending fishing when a population falls to less than half of its long-term average. They found that this strategy would prevent 64 percent of collapses but would reduce the average catch by only 2 percent over the long term. (See Figure 2.) 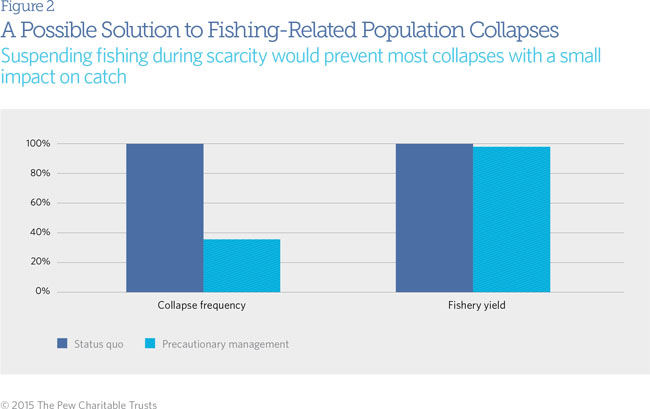 A new study shows for the first time that fishing is likely to worsen population collapses in a group of small but important species known as forage fish.

Populations of tiny forage fish, such as herring and sardines, fluctuate naturally, and sometimes collapse. This can have harmful effects on the fishing industry and on larger animals (including whales, tuna, birds, and seals) that depend on forage fish for sustenance. But a 2014 study offers a clue as to how we might make such collapses less severe.