A new study shows for the first time that fishing is likely to worsen population collapses in a group of small but important species known as forage fish.

Scientists have long known about the wide fluctuations in the abundance of forage fish, including the occasional population collapse. But they had not been able to figure out whether such collapses were entirely natural or were related to fishing. 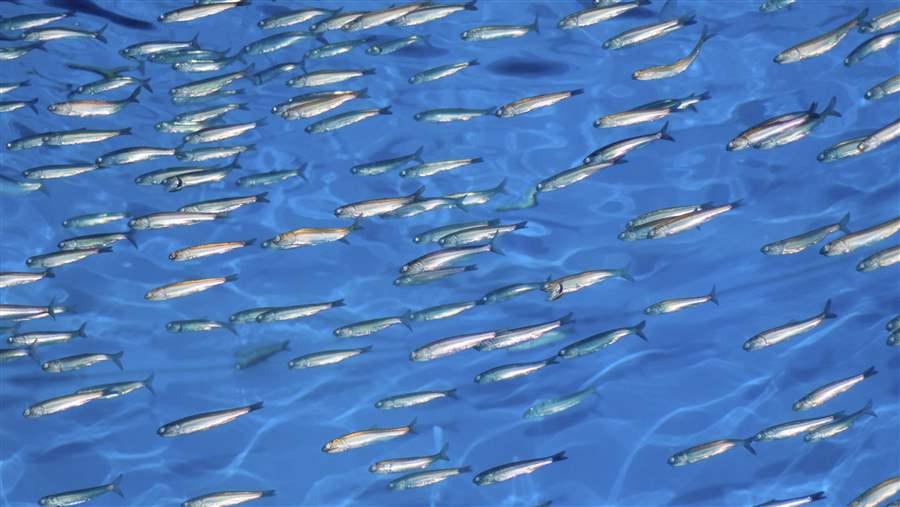 Forage fish, such as anchovies (above), are a key source of food for tuna, salmon, whales, and seabirds.

“It has been a big question for scientists for a long time,” said Tim Essington, the lead author and a Pew marine fellow. “We suspected a connection between fishing pressure and collapse, but we didn’t have the evidence until now.”

Essington, a professor at the University of Washington, and his colleagues looked at population data for 55 stocks of anchovies, sardines, and other forage fish from around the world. Of those, 27 had collapsed at some point.

“We looked at what happened just before each collapse,” said Essington. “We saw that fishing was particularly intense right before and during the collapse—50 to 200 percent higher than average. At the same time, the rate of reproduction was plummeting.”

To further investigate the impact of fishing, Essington and his co-authors asked whether the collapses resembled natural patterns.

The collapsed fish stocks declined to levels that were lower than in 97 percent of the simulations. Though forage fish eventually rebound, the collapses deprive other species of food and fishermen of income for as long as the population is depressed.

“Some of the largest fisheries in the world depend on forage fish,” said Essington. “They are also a key source of food for tuna, salmon, whales, and seabirds. When forage fish collapse, the effects on these larger species and on fisheries are far-reaching.”

Essington also looked into potential solutions and found that suspending fishing when a population drops below half of its long-term average would prevent an estimated 70 percent of collapses, while fishermen would only have to forgo 2 percent of their catch.

Study shows that natural fluctuations do not explain population data

A new study shows for the first time that fishing likely worsens population collapses in a group of small but important species known as forage fish. Some of the largest fisheries in the world target forage fish, such as anchovies and sardines. These &ldquo;baitfish&rdquo; are also a key source of food for larger marine animals, including tuna, salmon, seabirds, and whales.