Between 1980 and 2013, the federal imprisonment rate increased 518 percent, from 11 inmates for every 100,000 U.S. residents to 68.1 During the same period, annual spending on the federal prison system rose 595 percent, from $970 million to more than $6.7 billion in inflation-adjusted dollars.2 Prison expenditures grew from 14 percent of the Justice Department’s total outlays to 23 percent, increasingly competing for resources with law enforcement and national security programs.3

States, like the federal government, recorded sharp increases in incarceration and corrections costs over the past three decades. However, between 2007 and 2013, many states made research-driven policy changes to control prison growth, reduce recidivism, and contain costs. While the federal imprisonment rate continued to rise during that period, the state rate declined. 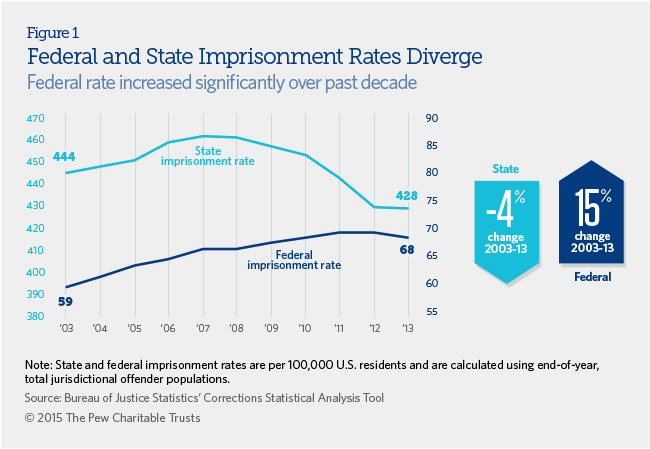 Since 2007, more than two dozen states have passed comprehensive, data-driven reforms designed to prioritize prison beds for serious offenders, reduce recidivism and incarceration rates, and avert new prison spending.4 An analysis of 17 states that have participated in the Justice Reinvestment Initiative—a collaboration that includes the U.S. Justice Department, The Pew Charitable Trusts, the Council of State Governments Justice Center, and other partners—found that they expect to prevent as much as $4.6 billion in corrections spending over the next several years.5 These states’ reforms may provide a guide for federal policymakers as they explore strategies to protect public safety, hold offenders accountable, and control corrections costs.