All animals need safe places to grow, reproduce, and ﬁnd food. Marine animals are no different. In the ocean, their habitats can be the sandy bottom, a seamount rising from the ocean ﬂoor, or a deep canyon carved into the continental shelf. These places are affected by pollution and other human activities such as oil and gas drilling and commercial ﬁshing, which research shows can have negative consequences. The National Oceanic and Atmospheric Administration is tasked with regulating ocean ﬁshing and protecting our nation's ocean resources. 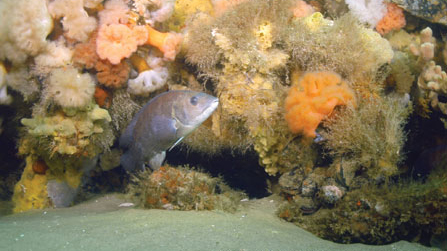 
Some areas of New England's waters have been closed to various types of ﬁshing gear for decades in order to encourage the return of healthy populations of important groundﬁsh (such as cod, haddock, and ﬂounder), but the region does not have a plan for habitat management, as required by federal law. A plan for protecting essential ﬁsh habitat has been under development for 10 years.

A variety of alternatives will be presented to the public later this year, many of which propose a reduction in the size of the area currently protected. Some of these proposals ignore established science and place the short-term interests of the commercial ﬁshing industry above the need to protect habitat for the long-term beneﬁt of the ecosystem, its ﬁsh populations, and the coastal communities they support.

Biologically productive habitat of ample size is essential to maintain healthy ﬁsh populations. For example, recent work by the Gulf of Maine Research Institute found that older cod—critical to the reproductive success of the species—are far more abundant inside protected areas, making these places crucial to the recovery of depleted cod populations.1 Closed areas also contributed to the recovery of New England's scallop ﬁshery.2

Habitat protection may be more important now than ever before, because these areas can provide resilience for marine species and ecosystems against the effects of climate change. New England waters are warming, disrupting ﬁsh populations and undermining the marine food web.3 A climate change adaptation strategy produced in 2012 by NOAA and other federal agencies made habitat protection a top priority for helping ﬁsh adapt to warming oceans.4

A new way to manage fish

Protecting habitat is part of a new way of managing ﬁsh, and it can lead to better ecosystem health in the future. Instead of looking at each ﬁsh species in isolation, this ecosystem-based ﬁsheries management approach takes into account the ways that marine species interact with one another and with their environment. Leading scientists have advocated for such a management model for many years. It's time to take action. Fisheries managers should: