The East Antarctic Ice Sheet flows off the Antarctic continent into the Southern Ocean that surrounds it. It is an expanse of ice abruptly surrendering to sapphire seas. Coastal currents, among them the Prydz  Bay Gyre, mingle with the Antarctic Circumpolar Current, supporting  marine life throughout the circumference of the continent. Penguins,  seals, krill, and toothfish rely on this vast expanse of frigid habitat.

Few people have ever seen East Antarctica. Although some areas and  features have been well studied, others remain enveloped in mystery.  Scientists are still trying to understand the region's oceanography and  the breadth of resident species. East Antarctica's unique oceanographic  features, coupled with its high biological value to seabirds, seals, and  other animals, make it a prime area for protection. It is also an area  extremely vulnerable to climate change.

Twenty-four countries and the European Union will soon decide whether  to create permanent safeguards for the East Antarctic marine area or to leave it vulnerable to industrial fishing.

Glacial streams have over millennia carved deep canyons into the continental shelf and slope along the East Antarctic coastal region. The Gunnerus Ridge rises from the depths of the ocean bed, to a seamount—a mountain that sits beneath the surface rich in biodiversity—off its northern end. The unique marine habitat off the continental shelf of Prydz Bay is due to a large channel formed during prehistoric times.

The seals and seabirds off the shores of East Antarctica feed mostly on krill and silverfish—both of which are vital to a healthy ecosystem. Prydz Bay alone is home to at least 1 million breeding pairs of snow petrels, as well as Antarctic terns and a variety of albatross species. East Antarctica also supports many colonies of Adélie and emperor penguins. About 750,000 pairs of Adélie penguins and an estimated 50,000 pairs of emperor penguins forage over great distances, with emperors traveling up to 900 kilometres (560 miles) from their colonies and Adélies more than 480 kilometres (300 miles).

The area is home to crabeater, Weddell, Ross, and leopard seals. Crabeaters are particularly prolific, with 1 million estimated to breed off East Antarctica. The region also harbors up to 42 percent of the world's little-known Ross seals, designated a Specially Protected Species under the Protocol on Environmental Protection to the Antarctic Treaty.

Due to the wide range of unique species and habitats in and around the East Antarctic marine area, only a permanent, comprehensive system of fully protected marine reserves will ensure the long-term conservation of this region's extraordinary life. The system of marine reserves must be large enough to safeguard broad foraging areas for whales, seals, penguins, and other seabirds. Fishing fleets must also be kept out of the region's polynyas—areas of open water surrounded by sea ice that are crucial food sources for many species.

The Commission for the Conservation of Antarctic Marine Living Resources, or CCAMLR, should designate a series of reserves in the East Antarctic region. 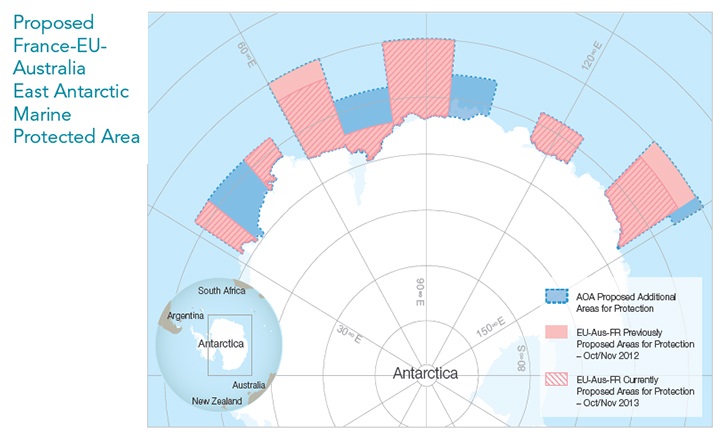 This new network of marine sanctuaries would protect large-scale ecosystem processes in their entirety, including:

In order for the EU, French, and Australian proposal for the East Antarctic to be meaningful, the designation must be largescale, ecologically diverse, and permanent. Review language that allows management to be adjusted if necessary is an approach supported by both The Pew Charitable Trusts and the International Union for Conservation of Nature. Scientific endeavors to collect data that underpin important research, including the consequences of climate change, should be encouraged.

The East Antarctic designation must be permanent, large-scale, and ecologically diverse. Instead of applying a sunset clause, The Pew Charitable Trusts calls on CCAMLR to agree on a standard review clause for use on all future MPAs.

Use Download box above to view the complete sheet.