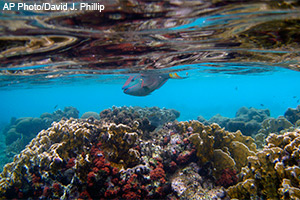 A new study finds no-take marine reserves, where fishing for parrotfish is prohibited, may make coral reefs six times more resilient to coral bleaching and other disturbances. Parrotfish eat algae, so a reef system with abundant parrotfish is more likely to recover from disturbance rather than "tip" into an undesirable state in which algae dominate. Reducing greenhouse gas emissions also improves coral resilience, but only in the long term.

The research is the result of Dr. Peter Mumby's three-year Pew Marine Fellowship project to better understand the health of coral reefs.

"This added resilience is important because it shows that protecting parrotfish, through such measures as marine reserves and fisheries policies, increases the ability of corals to adapt to warming oceans," said Dr. Mumby, lead author of the study and a professor at University of Queensland in Australia. "In addition, it should reduce the loss of ecosystem services that reefs provide, such as support for fisheries and coastal protection from storms." 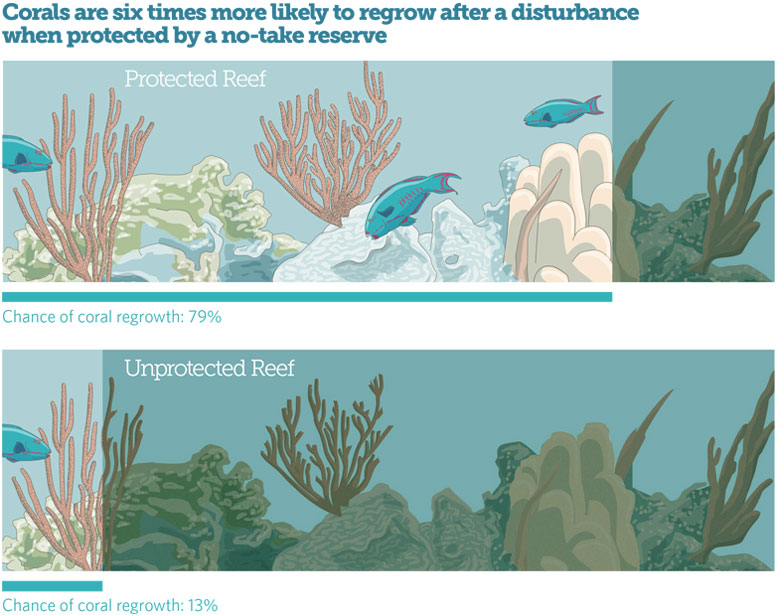 Dr. Mumby and four other scientists used a simulation model to study the effects of marine reserves and climate change on a large coral reef in Belize. They focused on ecological resilience—which they defined as the odds that coral will regrow after a hurricane or coral bleaching event.

The researchers used the model to test two factors that could affect coral's ability to recover. The first was the existence of a no-take marine reserve, which would prohibit fishing, including for parrotfish. The second factor was reducing greenhouse gas emissions to slow the warming of the oceans, which could lead to thermal stress in corals.

Effects of reserves and reduced emissions

The study found that, in the near term, corals are six times more likely to regrow after a disturbance if parrotfish are protected by a reserve: the probability of corals regrowing by year 2030 was 12 percent without a reserve but 79 percent with one. If corals do not regrow, the reef is likely to “tip” into an algae-dominated state.

Reductions in greenhouse gas emissions had little effect in the near term, but in the long term (by 2080), the model showed that aggressive reductions improved coral reef resilience. Combining these reductions with a no-take reserve produced the largest benefit. With both measures in place, it took the average reef 25 years to degrade to the point where the area covered by live coral was less than 10 percent. In a scenario with no reserve and no steps to limit emissions, that took only eight years.

"Dr. Mumby's work highlights the importance of grazers like parrotfish for Belize reefs and others around the world," said Polita Glynn, director of the Pew Marine Fellows Program, which supported his research. "These results suggest that removing fishing pressure on parrotfish or other algae grazers could enrich coral reef ecosystems."