Managing the seas' smallest fish to protect the ecosystem

Most fisheries in the United States are regulated one species at a time. But regional councils and the National Oceanic and Atmospheric Administration are moving toward a strategy that takes into account the marine ecosystem as a whole—one called ecosystem-based fishery management. Even though the scientific models being developed are complex, some simple steps can be taken now to get us closer to this goal. Managing the nation's forage fish—small, schooling prey species—in a more precautionary way can be a useful tool in this transition. 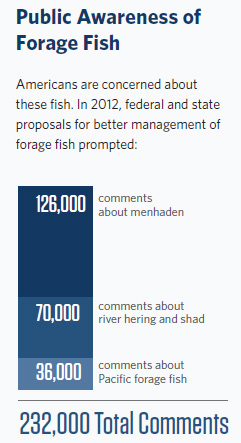 Small prey fish play an important role in our marine ecosystems. They are important food for ocean predators, such as larger fish, birds, and marine mammals. Examples of forage fish include:

Forage fish serve an important ecological role in the food webs of many coastal and marine ecosystems. They form an essential link between microscopic plants (phytoplankton) and animals (zooplankton) and top predators (large fish, marine mammals, and birds). Scientists estimate that total consumption of forage fish by the world's marine mammals can amount to 20 million tons a year.

These fish also boast historical significance to our nation. Native Americans and early colonists depended on them as important protein sources in their diet and fertilizer for crops. Recreational fishing along our nation's shores and rivers has long depended on forage fish for bait. And commercial fishing and the processing of forage species for canned food and many other products have historically provided thousands of jobs and served as the economic engine in many coastal communities.

We continue to rely on forage fish as economic support for the entire fishing industry. In 2011, the U.S. commercial fishing industry landed 9.9 billion pounds of seafood. Forage fish directly or indirectly provide much of the foundation for this industry. The Lenfest Forage Fish Task Force, a distinguished international group of scientists, studied 72 different ecosystem models from around the world and estimated that the annual value of direct landings of forage fish is $5.6 billion, whereas their “supportive value” as food to other commercial species is approximately double, $11.3 billion.

How are forage fish managed now?

Many of the nation's forage fish species are entirely unmanaged. In addition, some of the species that are managed face depletion because of the reliance on a strategy that considers only one species at a time, emphasizing catch, and failing to account for the predator species that also depend on forage fish as food. Economic analysis by fishery managers also relies too heavily on the costs and benefits of directly catching forage fish rather than evaluating the value of leaving them in the ocean to feed predators.

But we do have tools at our disposal to correct these problems. Measures that enable more effective management of forage fish include the Magnuson-Stevens Fishery Conservation and Management Act, the law underpinning fish management in the United States; separate compacts between states; and the Endangered Species Act. There are several examples of precautionary forage fish management from the Pacific Coast. Fisheries managers in the North Pacific precluded directed fishing on a suite of forage species in 1998, and in 2010 designated forage fish as “ecosystem components.” Also, Pacific fishery managersprohibited the harvest of krill in 2006, and in 2012 they adopted an objective of prohibiting new directed fisheries on unmanaged forage species until ecosystem effects are assessed.

To view the complete fact sheet, including citations, download the PDF below.