For the first time, scientists have shown that ocean warming has had a global impact on the mix of species caught by fishermen. Previous studies indicated that some species are shifting location in response to temperature increases, with fish gradually moving away from the equator into cooler waters. However, research published in May 2013 in Nature shows that species from warmer waters have also been replacing those traditionally caught in many fisheries worldwide at least since 1970.

Dr. William Cheung of the University of British Columbia and his co-authors used the temperature preferences of fish caught around the world to determine the relationship between fisheries catch and ocean warming. They first assembled data on the distribution of 990 marine fish and invertebrates. They assigned each species a temperature preference based on the average sea surface temperature in areas where that species was predicted to have occurred between 1970 and 2000. Next, to measure changes in the composition of marine fisheries, the researchers compiled data on the tonnage of each species caught in the 52 marine ecosystems that account for most of the world's fisheries. Then, for each ecosystem and each year from 1970 to 2006, they calculated the average temperature preference of the species, weighted by the amount caught. Finally, the researchers determined the connection between ocean warming and changes in fisheries catch by using a statistical model that separates out other factors, such as fishing effort and oceanographic variability.

The authors found that, except in the tropics, catch composition in most ecosystems slowly changed to include more warm-water species and fewer cool-water species. In the tropics, the catch followed a similar pattern from 1970 to 1980 and then stabilized, likely because there are no species with high enough temperature preferences to replace those that declined. Statistical models showed that the increase in warm-water species was significantly related to increasing ocean temperatures.

Earlier research led by Dr. Cheung predicted continuing changes in fish distribution and catch as oceans warm (Cheung et al. 2010). These shifts could have several negative effects. These may be felt most in the tropics, where water temperatures could exceed the preferences of many tropical species, resulting in a large reduction in catch. Additional impacts could include loss of traditional fisheries, decreases in profits and jobs, conflicts over new fisheries that emerge because of distribution shifts, and food security concerns, particularly in developing countries. 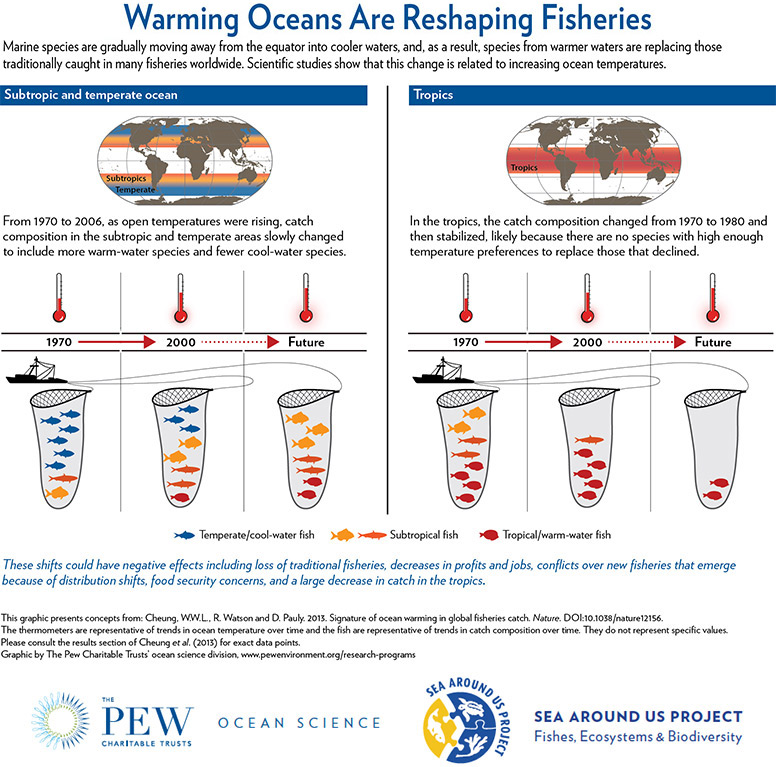 Species from warmer waters are replacing those that are traditionally caught in fisheries worldwide. This graphic presents concepts from Cheung et al. (2013). The thermometers are representative of trends in ocean temperature over time and the fish are representative of trends in catch composition over time. They do not represent specific values. Please consult the results section of Cheung et al. (2013) for exact data points. Graphic by The Pew Charitable Trusts' ocean science division.

We encourage you to download or embed the associated files and you are hereby granted a non-exclusive, royalty-free, terminable, world-wide license to use the image for non-profit use only, provided no modifications are made to the content. Any use, publication, or distribution of the image shall credit the Pew Ocean Science Division of The Pew Charitable Trusts and include the URL: www.PewEnvironment.org/research-programs.