Sponsored by Brazil, Comoros, Croatia, the Member States of the European Union, and Egypt 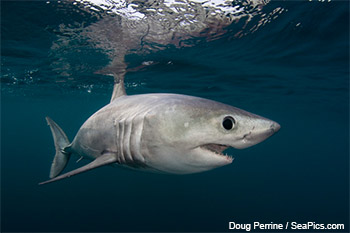 The large, warm-blooded porbeagle shark (Lamna nasus) is distributed throughout the temperate north Atlantic and southern hemisphere. Populations of the porbeagle have been severely depleted around the globe. The International Union for the Conservation of Nature (IUCN) Red List of Threatened Species assessed the porbeagle as Vulnerable globally, Endangered in the northwest Atlantic and Critically Endangered in the Mediterranean and northeast Atlantic. The porbeagle falls into the United Nations Food and Agriculture Organization's (FAO) lowest productivity category, meaning it has an extremely low reproductive capacity and thus is particularly vulnerable to overexploitation. It is also one of the ocean's most vulnerable species.

This species yields significant commercial value for both its large fins and its meat and is taken in both targeted and bycatch fisheries. The international demand for porbeagle meat and fi ns has driven populations to very low levels across its range. Recent assessments show that because porbeagle populations have been severely depleted, it is unable to fulfill its key role in the marine ecosystem. Porbeagle populations are reduced by about 70 percent of their historical levels wherever they are found, and in some places declines are even steeper. For example, porbeagles have virtually disappeared in the Mediterranean Sea.

Although management has improved within some of the porbeagle's range because of domestic fi sheries measures, such as a management plan in Canadian waters and a retention prohibition in the European Union, almost no international conservation or management measures for the species are in place on the high seas (areas beyond national jurisdiction).

The North East Atlantic Fisheries Commission (NEAFC) has prohibited the targeting and retention of porbeagle sharks, but the International Commission for the Conservation of Atlantic Tunas (ICCAT) has still failed to act; within the porbeagle's southern range, there are no conservation or management measures on the high seas whatsoever. This adds up to huge areas where the porbeagle has no protection. Because the species is extremely vulnerable to both targeted shark longline fisheries and bycatch throughout its range, further depletion is likely to render this species at risk of extinction. Even where retention is prohibited, such as in the EU and in NEAFC's area, enforcement and compliance are often weak and significant levels of mortality remain.

A proposal to include the porbeagle in CITES Appendix II was proposed at the 15th meeting of the Conference of the Parties (CoP15) and was endorsed by the FAO, the CITES Secretariat, and TRAFFIC/ IUCN. However, at that time, the proposal very narrowly missed being adopted. A new Appendix II proposal has been submitted by the EU Member States, Brazil, Comoros, Croatia, and Egypt for consideration by the Parties at CoP16. It is clear from continued assessments that the population has not recovered, and further analysis shows it is in a worse state globally than in 2010, while international trade is still significant. Although the recent inclusion of porbeagle sharks on CITES Appendix III is a positive step, an Appendix II listing is vital to ensuring that they are managed throughout their range to prevent overexploitation due to international trade. A CITES Appendix II listing of the porbeagle is scientifically justified and essential to ensuring that international trade occurs only from fisheries that are legal and sustainable and that trade data are recorded.