How many wild bluefin tuna remain in the Atlantic Ocean?  How many can be removed from the ocean each year without jeopardising the future of the species? How much do the populations have to grow before we can proclaim them recovered and healthy? These are some of the key questions that governments must answer to ensure that their decisions about fishing bluefin tuna are responsible, and the fishery becomes sustainable.

An accurate stock assessment is critical to achieving a well-managed, healthy Atlantic bluefin population. Of course, because bluefin tuna spend most of their lives swimming underwater in the open ocean, scientists can't count each individual fish. So, as with other fisheries, they have developed complex stock assessment models to estimate the number of bluefin tuna in the eastern and western Atlantic and to predict their population status into the future. Government managers rely on the results of these assessments, which are conducted every two to three years, to set fishing quotas.

In October 2012 the International Commission for the Conservation of Atlantic Tunas (ICCAT), the intergovernmental organization charged with managing Atlantic bluefin tuna, finalised the results of both the eastern and western Atlantic bluefin stock assessments. In the lead up to ICCAT's annual meeting in November 2012, its member governments are currently in negotiations to determine new fishing quotas for 2013–2015 based on the assessment results and recommendations by ICCAT's scientific committee (SCRS).

The good news is that there is a growing body of science that is improving the understanding of bluefin biology and behavior and offering hope for a new and better stock assessment model.  ICCAT has recognised the need to incorporate this new science into its stock assessment. However, it is critical that, in line with scientific advice, Atlantic bluefin quotas do not increase until these assessments have been updated to reflect the best available science. 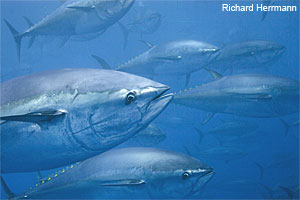 ICCAT has set a target date of 2019 for rebuilding the western Atlantic bluefin population, a fish assessed as Endangered by the IUCN. To accurately predict the impact of management decisions on recovery levels and timelines, the SCRS needs to have a clear understanding of how many young each adult bluefin tuna can be expected to produce. While this may seem relatively straightforward, it has been a weak point of the western bluefin stock assessment for more than a decade.

The western population assessment currently uses two vastly different scenarios to model the adult-to-young ratio, or what fishery scientists refer to as the ‘stock-recruit relationship' (SRR).  Under the ‘high recruitment' scenario, it is assumed that the number of young will increase as the number of adults increases, and therefore a much higher catch level is possible in the future if the population is allowed to rebuild. Under the ‘low recruitment' scenario, it is assumed that the number of adults does not influence the number of young produced, meaning that the fishery will never be much more productive than it is today as an increased number of adults is not expected to lead to increased young. These widely disparate models have led to a lack of clarity in management recommendations from SCRS scientists. Some years the SCRS has favored the low recruitment scenario, while in other years the high recruitment scenario has been used. At other times, including 2012, the SCRS presented the results of both the high and low recruitment scenarios to ICCAT governments for consideration.

Two recent scientific projects have taken a fresh look at the available data and been able to provide more specific guidance on the western Atlantic population's SRR. In June 2012, 13 of the world's leading bluefin scientists explored the consequences of using the high or low recruitment projections when forecasting the future trajectory of the bluefin population and presented these findings to the SCRS in September (PDF). Together they recommended that ICCAT employ ‘decision tables', which compare the likelihood of success of different quota levels in achieving a specified goal (such as maximising the population size or catch in the short term or long term), under either the high or low recruitment scenarios. Such an approach allows fishery managers to consider more fully the longer term consequences of any decisions they make. In all scenarios, except the one aimed at maximising short-term catch, the high recruitment scenario-based decisions were the preferred management alternative.

For the last three decades, ICCAT has assessed and managed Atlantic bluefin tuna as if there are two distinct populations. Essentially drawing a line down the middle of the ocean at 45°W, ICCAT has assumed that there is an eastern population that spawns in the Mediterranean Sea and a western population that spawns in the Gulf of Mexico].  However, research conducted in recent years has revealed that bluefin behavior is not that simple. New studies – electronic tagging, genetics, and chemical analyses of bluefin tuna otoliths (earbones that can reveal the birthplace of individual tunas) – show that, while the two populations maintain separate breeding grounds, bluefin travel far in their search for food, and bluefin originating in the east mix extensively with western Atlantic bluefin in their feeding grounds in the North Atlantic.

A new otolith study (PDF) has shown just how extensive the mixing may be. Scientists at the University of Maryland and Texas A & M University determined that 72 percent of bluefin tuna caught off the coast of North Carolina and Virginia in 2011–2012 were born, not in the Gulf of Mexico as the current working hypothesis would assume, but in the Mediterranean Sea. In other words, the western Atlantic fishery is dependent on the immigration of Mediterranean-spawned eastern bluefin, which are then fished in western Atlantic waters. 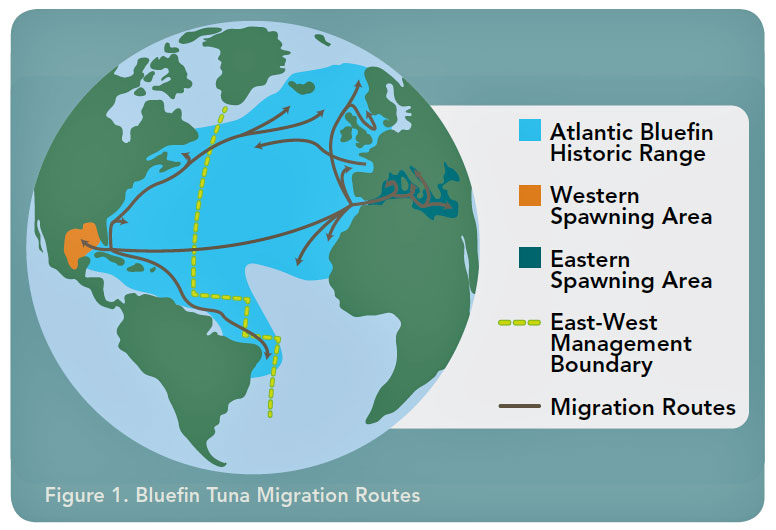 This study has significant implications for the western Atlantic bluefin stock assessment and management of the species. The large quantity of eastern fish in western waters is artificially inflating the count of western bluefin. Adding to the problem, persistent illegal fishing in the Mediterranean Sea (PDF) is likely to be compromising the health and economic viability of the western fishery by removing eastern fish that would have migrated to the waters off North America. Recognizing the inherent and insurmountable shortcomings of its current assessment models, ICCAT has acknowledged the need to update its stock assessment to incorporate the latest scientific knowledge about mixing.

As expected, the 2012 SCRS report to ICCAT included results for both the high and low recruitment scenarios. While the high recruitment scenario indicates that there is a 60 percent chance that overfishing can be stopped in the short-term by reducing quotas from 1,750 mt to 1,200 mt, it also indicates that the western Atlantic tuna population has no chance of rebuilding within the ICCAT deadline of 2019, even if the fishery is shut down. Under the low recruitment scenario, the report results show that quotas would need to be 2,000 mt or under to allow for an adult population that would be approximately the same size as it is today.

As the 2012 ICCAT annual meeting approaches, governments may be facing industry pressure to favor the low recruitment scenario and increase quotas in the western Atlantic in response to what the new stock assessment suggests is a barely discernible increase in the population. However, in their 2012 report, the SCRS scientists acknowledged the uncertainty in the current model and stated that maintaining the western quota at the current level of 1,750 mt will allow the bluefin tuna population to continue to increase, regardless of the relationship between the number of adults and the number of young they produce. The decision table approach, described above, was applied to the 2012 assessment results; after considering the likelihood of the two recruitment scenarios the scientists suggested that the quota should be maintained at 1,750 mt to maximise long-term catch and population size.

The next step is clear. When ICCAT governments convene in Agadir, Morocco in November 2012, it is imperative that they heed the scientific advice and not increase the western Atlantic bluefin tuna quota beyond 1,750 mt for at least the next three years or until the stock assessment model has been modernised and updated to reflect current scientific knowledge. Since the stock assessment erroneously counted a large number of ‘eastern' bluefin as ‘western' bluefin, any decision to increase quotas would not only be misguided but would be likely to lead to further declines in the severely depleted western population.