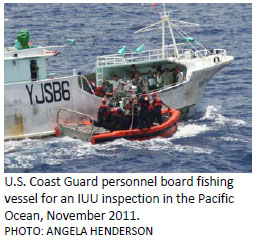 What is IUU fishing?

How would the PSMA and S. 267 eliminate IUU fishing?

The United States was a principal architect and early signatory of the PSMA, which once it enters into force, will prevent pirate vessels from entering ports all over the world. Closing ports and denying port services such as refueling and resupplying to such vessels is an effective way to combat IUU fishing as it makes it riskier and more expensive for those involved to do business.

How will ratifying PSMA and passing S. 267 help the U.S.?

U.S. ports already comply with many provisions of the PSMA. U.S. ratification would send an important signal that America expects other nations to meet these basic, common-sense standards. IUU operators flout fisheries laws and management measures to increase their take. The result is a glut of IUU fish that depresses the value of legally caught American seafood.

Congressional approval of S. 267 would: