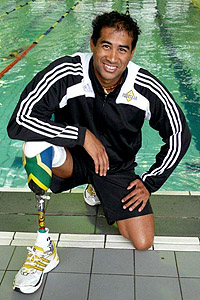 Achmat Hassiem lost a leg in 2006 in an encounter with a great white shark while he and his brother were training to be lifeguards. As he distracted the animal so his brother could get into a boat, the shark attacked, dragging him underwater. Hassiem's brother grabbed his outstretched arm and hauled him aboard the boat.

Undaunted by his injury and fitted with a prosthetic, Hassiem swam in the 2008 Beijing Paralympics and is training for the 2012 London games. He has set numerous records in his country and in Africa and is the world champion for the Paralympics 200-meter butterfly. He received the Bravery Award from Prince Michael of Kent on behalf of the Royal Lifesaving Society.

He became a shark advocate for the Pew Environment Group when he traveled to the United Nations in 2010 to press for shark conservation.