Tuna species are found throughout the world's oceans. Atlantic, Pacific, and southern bluefin tuna are prized for the sushi and sashimi market. Skipjack, yellowfin, and bigeye tunas are found mainly in the tropics, while albacore, like bluefin, are also found in temperate waters. These species are used for a mixture of canned and fresh productions. Tuna fisheries are managed globally by five regional fishery management organizations. 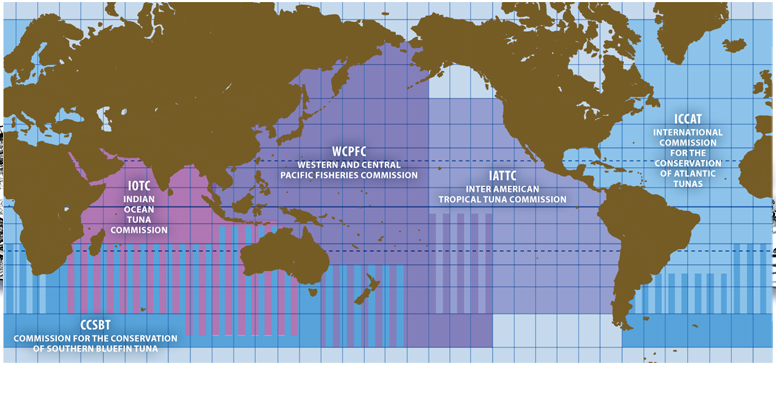 There are three species of bluefin tuna - Atlantic, Pacific, and southern. They are found in surface and subsurface temperate waters and are capable of diving to depths of 500-1,000 meters. The largest of all bluefin species is the Atlantic bluefin, which can live over 40 years, weigh over 600 kg, and grow to over three meters. Bluefin tuna are slow to mature and some may not reproduce until they are 15 years old. Bluefin are caught primarily by purse seines, as well as by longlines, harpoons, and pole-and-line gear. 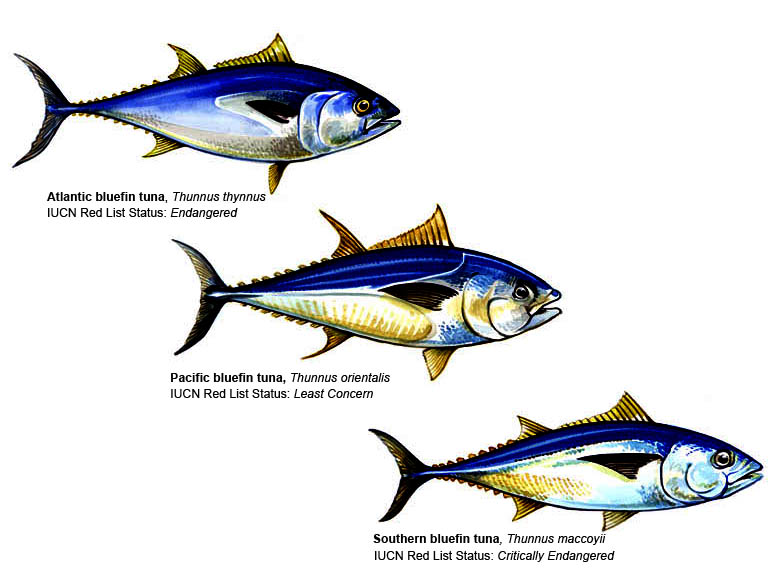 Where bluefin live and how much is caught in each RFMO by metric tonne.

Skipjack is a tropical tuna that is more in abundance than any other tuna species. They are found mostly in the surface waters of the open ocean, but may spend part of their life in nearshore waters. They can grow up to one meter and weight up to 19 kg. Even though they can live to 7 years, they are caught primarily before they are 3 years old and processed for the global tuna market. Skipjack are the most common kind of canned tuna. 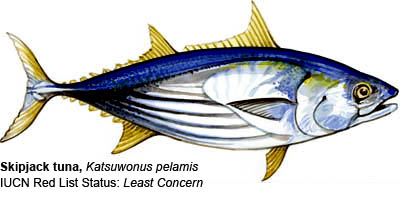 Where skipjack live and how much is caught in each RFMO by metric tonne.

Yellowfin are tropical tuna found primarily in surface and subsurface waters of the open ocean. They can reach almost 2 meters in length and weigh up to 181 kg. They live up to 7 years and mature between the ages of 2 and 4. Small yellowfin are caught near the surface by purse seine and pole-and-line gear, while older fish are caught in deeper waters using longline gear. Small yellowfin are used mainly for canning while high quality, larger yellowfin are often shipped fresh to Asian markets. 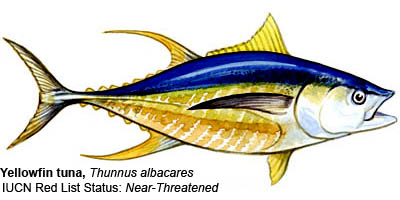 Where yellowfin live and how much is caught in each RFMO by metric tonne.

Albacore are found in tropical and temperate waters. The juveniles are often found near oceanic fronts. Adults are found at depths of around 380 meters, but can reach further depths in search of prey. Albacore tuna can weigh up to 36 kg and reach over one meter in length. They mature at about 5 years and can live for 12 years, but are typically caught when they are 1.5 years to 10 years old. Small albacore are caught at the surface in cool water outside the tropics, while larger albacore are caught mainly at lower latitudes using longline gear. Most of the catch is used for canned tuna. 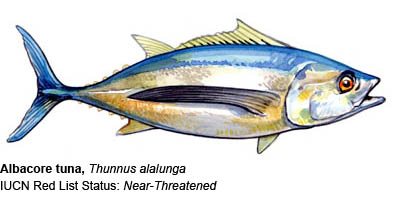 Where albacore live and how much is caught in each RFMO by metric tonne.

Bigeye are tropical tuna found in surface and subsurface waters. They reach 1.7 meters, weigh up to 180 kg, and can live to around 9 years. Small bigeye are caught on the surface by purse seine vessels fishing on FADs where immature bigeye tend to congregate. Larger and older fish are caught in deeper waters using longline gear. Small bigeye are used mainly for canning while high quality, larger bigeye are especially valuable as fresh fish in the Japanese market. 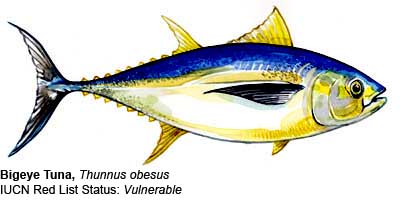 Where bigeye live and how much is caught in each RFMO by metric tonne.