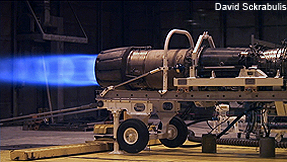 Advanced biofuels offer the United States an exciting new economic opportunity and a path away from dependence on foreign oil. The nation imports 49 percent of the liquid fuel it consumes, primarily petroleum, often from volatile regions of the world. In addition to security concerns raised by political uncertainty abroad, our reliance on foreign oil exacerbates the trade gap. The nation sends $1 billion a day to foreign countries, and more than half of the 2011 trade deficit—59 percent—can be attributed to oil imports.1 To strengthen its energy independence and its economy, the United States must increase its use of domestic sources, specifically advanced biofuels.

What Are Advanced Biofuels?

First-generation biofuels such as ethanol are made from sugar, starch, or vegetable oil and are extracted from food crops such as corn and soybeans using conventional technology. Advanced biofuels (the second, third, and fourth generations) are high-energy cellulosic liquid fuels made from non-food, non-feed, sustainably grown stocks and agricultural wastes that have low greenhouse gas emissions. Many forms exist, including cellulosic ethanol, biomass, and biogas. Some advanced products can be “dropped in” to seamlessly replace traditional diesel or jet fuel without a need to retrofit engines. They are most commonly used in the transportation sector.

Who Is Using Advanced Biofuels?

The U.S. Department of Defense (DoD) and commercial airlines are testing and using advanced biofuels.

The DoD and its service branches are the single largest consumers of liquid fuels in the world, spending more than $11 billion annually. In the long term, there is no question that the military will need alternatives to petroleum, especially for their fleets, which will be used by war fighters for decades. By investing today, the DoD is positioning itself to take advantage of these new fuels when they are cost-competitive with conventional fuel. Currently, price volatility causes budgetary challenges: For every $10 increase in the price of a barrel of oil, the DoD must pay an additional $1.4 billion. The Navy and Air Force have set a target date of 2020 and 2016 respectively to increase use of non-petroleum blends to 50 percent.

Obstacles to adoption of “drop-in fuels” include cost, limited availability, and a lack of refining capacity, but the cost is rapidly decreasing. In 2011, the Navy purchased 450,000 gallons of advanced biofuels for aircraft, ships, and unmanned vehicles at half the price per gallon as a similar purchase in 2009. Bloomberg New Energy Finance forecasts that the worldwide cost of some biofuels—including those made from non-food vegetable oils, such as camelina—could be close to that of conventional jet fuel by 2018. Large-scale production is necessary to drive down costs and to meet the needs of the military and commercial aviation. 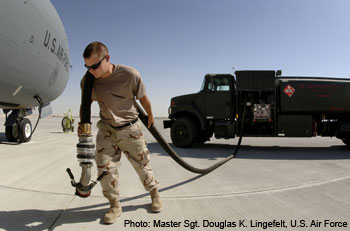 In April 2011, President Obama directed the secretaries of the departments of Agriculture (USDA), Energy (DoE), and Navy to partner with industry to produce more drop-in biofuels. In August 2011, the agencies signed a memorandum of understanding (MOU) to invest $510 million, equally shared among them, to spur production of advanced aviation and marine biofuels to power military and commercial transportation under the Defense Production Act of 1950. The law, originally passed at the start of the Korean War, has been used to provide seed money to develop technologies and materials such as microwave power tubes and superconducting wire.

The MOU notes that the United States spends more than $300 billion on imported foreign crude oil each year and that domestic advanced biofuels “provide a secure alternative that reduces the risks associated with petroleum dependence.” Specifically, the MOU directs that investment be used for joint construction or retrofitting of plants and refineries and requires the private sector to provide equal investment in these projects. The partnership between the agencies and industry aims to reduce U.S. reliance on imports and create jobs while positioning American companies and farmers to be global leaders in advanced biofuel production.

The federal government's fiscal 2013 budget requests $70 million in Defense Production Act purchases to support advanced drop-in biofuel production, up to $40 million under the DoE's biomass program for pilot demonstration plants, and $171 million in Commodity Credit Corporation funding by the USDA to assist with the production of bio-based jet fuel.

Role of Advanced Biofuels in the 21st Century

Advanced biofuels have a great potential to power our nation and help reduce its reliance on foreign oil. However, private businesses investing in these fuels need a clear and consistent signal that the government will support these fuels as they work to bring them out of the research-and-development phase toward commercial production. The best support is market certainty through policy. Policies such as the MOU ensure a demand for the product in the future, giving industry an incentive to invest today.