The Gulf of Mexico and western Atlantic Ocean provide important habitats for rare and beautiful marine species including bluefin tuna, sailfish, and leatherback sea turtles. But their dependence on these waters exposes them to a common threat—surface longline fishing.

Surface longlines have caused significant environmental problems since they were commercially introduced in the 1960s. Hundreds of baited hooks hang from a heavy monofilament mainline are suspended near the surface of the water column by buoys. Commercial fishermen set out these surface longlines extending up to 40 miles in length to catch swordfish, yellowfin tuna, and other tunas. But this equipment incidentally catches and kills more than 80 types of non-target animals, including depleted bluefin tuna and loggerhead sea turtles. Bluefin in the Gulf of Mexico face a particular threat because it is the only known spawning area for the western population of this important fish. The Atlantic surface longline fishery that also operates in these waters has exceeded its annual bluefin quota by as much as 218 percent in recent years.

Surface longlining even wastes the targeted species. For every legal swordfish caught kept in the Gulf, more than one undersized juvenile swordfish is discarded. Of those thrown back, only 23 percent survive.

One of the most remarkable animals on the planet, bluefin tuna can reach 1,500 pounds, complete trans-Atlantic migrations, and dive to depths of more than 4,000 feet. Unfortunately, overfishing, spurred by the growing demand for sushi, has depleted their numbers. Scientists estimate that the population of western Atlantic bluefin has declined by 64 percent since 1970. 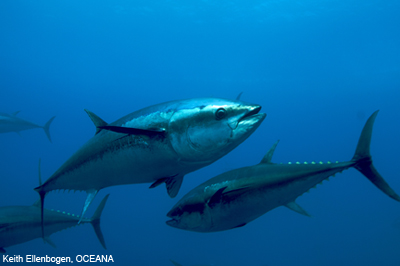 In the past, the National Oceanic and Atmospheric Administration's Fisheries Service, or NOAA Fisheries, enacted regulations to reduce harmful encounters between surface longlines and nontarget ocean wildlife including bluefin tuna. These measures, some in effect since 1982, included a prohibition on targeting bluefin in the Gulf of Mexico, closing areas to surface longlines, restricting certain types of bait, and, recently, mandating a specific type of hook shape, strength, and size. But even with these regulations, surface longlines still catch and kill far too many undersized, unwanted, and protected marine animals. In fact, this equipment catches more bluefin tuna in the Gulf now than it did prior to 1982. A recent report from NOAA Fisheries showed that the surface longline fishery in the Gulf of Mexico and Atlantic wasted almost 25 percent of the entire U.S. bluefin tuna quota. Since reproductively mature bluefin represent a substantial number of these mortalities, this incidental catch poses a serious threat to their long-term survival.

The Deepwater Horizon oil disaster in 2010 exacerbated the decades-old problem of surface longline fishing. The spill occurred in the only known spawning ground for western Atlantic bluefin and persisted through the peak of the spawning season. Toxic oil also spread into essential habitat for bluefin and other marine life. As the short- and long-term impacts of the spill have become apparent, the state and federal agencies charged with restoring the Gulf continue to look for solutions that will benefit both the environment and the Gulf's economy.

Simply modifying surface longlines won't fix the problem. But real solutions are close at hand. With a new proposed rule expected soon, NOAA Fisheries could close the Gulf of Mexico to longline fishing to protect spawning bluefin tuna, encourage the use of more selective fishing methods, and reduce bluefin mortality in the western Atlantic by enforcing a firm annual limit on bluefin bycatch for the entire surface longline fleet. The Pew Charitable Trusts is working with commercial and recreational fishermen and conservation groups to urge the agency to issue a strong bluefin rule.

To keep fishermen on the water when bluefin are in the Gulf, restoration monies provided by BP and other companies responsible for the Deepwater Horizon oil spill could help pay for fishermen to transition from surface longlining to more selective fishing methods. This could protect spawning bluefin and other nontarget ocean wildlife, while maintaining access by commercial fishermen to their target catch.