In October of 2011, the Obama administration announced its support for a long-term ban on new mining claims on roughly 1 million acres of national forest and other public land around Grand Canyon National Park. The move, following more than two years of study, came after Interior Secretary Ken Salazar issued a temporary halt to claimstaking in response to the skyrocketing number of new claims, mostly for uranium, around the park. The administration's decision would apply a 20-year moratorium under the Federal Land Policy and Management Act, an authority that has been used to protect other places from new mining claims, including Yellowstone National Park and Oregon's Coos Bay.

Unfortunately, H.R. 3155 would bypass this process and ensure that every one of this million acres around the Grand Canyon remains open to new uranium mining.

The one great sight which every American should see.President Theodore Roosevelt

Current Mining and Claims Not Affected

The Obama administration's action to protect the Grand Canyon applies only to future claims; current mining and existing valid claims are not affected. In fact, several uranium mines are operating now, and the Interior Department predicts that another seven may be developed, even with the administration's moratorium. Without the 20-year “withdrawal,” however, at least 30 mines and more than 725 exploration projects are predicted, potentially transforming an irreplaceable natural treasure into an industrialized mining region. 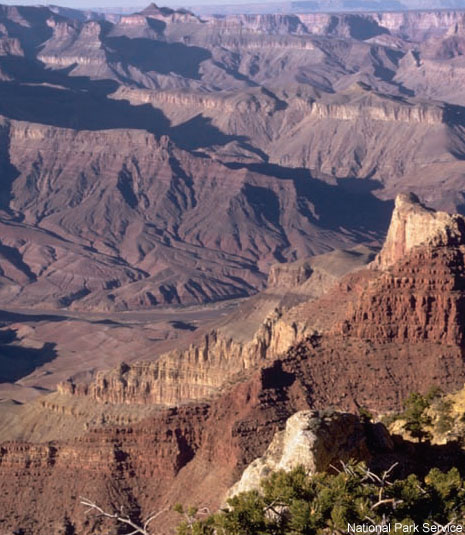 Over the past two years, the U.S. Geological Survey (USGS) carried out research and fieldwork in the area under consideration for mining. Although time limitations and weather constraints kept USGS from taking new surface-water samples, its analysis showed elevated radioactivity in numerous areas that had been mined. The agency concluded that a more thorough investigation was necessary and argued that the 20-year moratorium would offer needed time to ensure that the Colorado River and important groundwater supplies could be protected.

Hundreds of Claims are Associated with Foregn-Owned Companies

A report released in April by the Pew Environment Group, using Bureau of Land Management data, showed that claims around Grand Canyon National Park increased 2,000 percent between 2005 and 2010. Hundreds of these claims are controlled by foreign-owned companies, some with national backing—Russia's state atomic energy corporation, for example, and South Korea's state-owned utility.

Visitors to the Grand Canyon generate $687 million annually in revenue for the region and contribute to the creation of more than 12,000 full-time jobs, according to a 2005 Northern Arizona University study. The employment value of the park as a recreation magnet contrasts sharply with potential mining employment, which is likely to be modest and short-lived. According to industry-provided data compiled by the Interior Department, new mining operations are projected to employ only 75 people during a mine's estimated seven-year life.

The administration's action is necessary because the mining of gold, uranium and other hardrock minerals is still governed by a law signed by President Ulysses S. Grant in 1872. It gives mining companies “free and open access” to millions of acres of public land in the West and, according to the Congressional Budget Office, allows at least $1 billion in valuable metals to be taken from public land every year without taxpayer compensation. The Obama administration and members of Congress from both sides of the aisle have called for modernizing the law.