An analysis commissioned by the Pew Environment Group shows commercial fishermen in the Gulf of Mexico and South Atlantic lost $12.3 million and $2.9 million respectively in 2009 due to population declines in important species, such as red snapper and gag grouper. Revenues could have been between 16 and 32 percent higher if several fish populations were at healthier levels.

This additional income could have been earned had these fish populations not been subject to years of overfishing—catching fish faster than they can reproduce—that resulted in their current depleted condition. Congress recognized this costly legacy of overfishing in 2006 when it strengthened the Magnuson-Stevens Fishery Conservation and Management Act (MSA) with bipartisan requirements to establish science-based catch limits to end overfishing and rebuild depleted fish populations. Congress should stay the course with the MSA to restore our nation's fish populations to healthy levels and put those dollars back in fishermen's wallets.

The one-year snapshot, conducted by the nonprofit research organization Ecotrust, examined dwindling species and calculated how much more fish commercial fishermen would have been allowed to catch if populations were at healthy levels. The analysis found South Atlantic commercial fishermen from North Carolina to Florida lost money because of limited amounts of red snapper, red grouper, snowy grouper, red porgy and black sea bass. Gulf of Mexico commercial fishermen in Florida, Alabama, Mississippi, Louisiana and Texas would have been able to catch more red snapper, gag grouper, gray triggerfish and greater amberjack if populations had been robust.

The species analyzed by Ecotrust have been at unsustainably low population levels for years or even decades. The financial loss due to those lower populations have likely spanned many years and may continue. That situation lends urgency to ending overfishing and quickly getting these species on the road to recovery. The calculated losses represent just a small fraction of the total cost of overfishing. Although not addressed in this study, full costs extend to the broader commercial fishing industry, recreational fishermen and coastal communities. 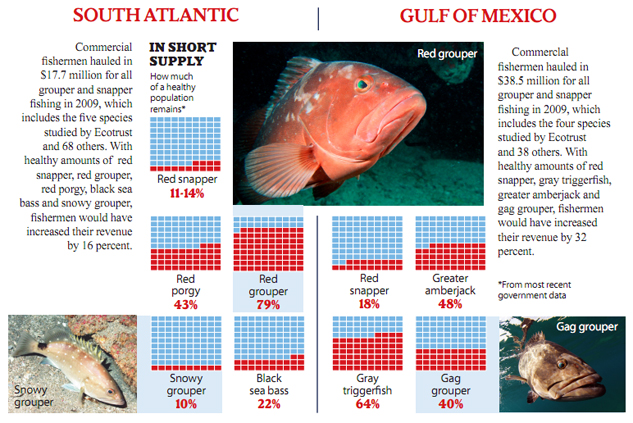