U.S. Arctic waters have until recently been protected from industrial development by year-round sea ice, an unforgiving climate and a remote location. As the Arctic warms, the retreat of pack ice is making vast new areas accessible to industrial activities. At the same time, this vital region is facing many other challenges related to climate change, from shifts in marine mammal habitats to changes in the food web.

The expansion of oil and gas development in the U.S. Arctic has the potential to bring both new economic opportunities and stresses to local indigenous communities and put pressure on a fragile ecosystem that is adapting to profound environmental changes.

Between 2000 and 2008, the area available to offshore oil and gas activities in Alaska waters increased eight-fold – from 9.4 million acres to 77 million acres. During those years, the Bush administration initiated oil development at an unprecedented pace and scale in the Chukchi and Beaufort seas of the U.S. Arctic Ocean, as well as Bristol Bay in the southeast Bering Sea.

Oil and gas activities pose significant environmental risks that include: potential oil spills, noise pollution, toxicological impacts, physical impacts and socioeconomic impacts. Before such development proceeds, more scientific research must be done to understand the impact of climate change on the Arctic. Comprehensive planning – including adequate consultation with indigenous communities – must take place to prevent environmental damage. Adequate response capabilities and infrastructure must be in place to deal effectively with emergencies such as oil spills.

The Alaska region of the Outer Continental Shelf (OCS) includes extensive acres of ocean habitat, mostly in Arctic waters.  This marine ecosystem is central to the lives of Arctic peoples and to the survival of 23 species of marine mammals, 100 species of fish and more than 50 species of birds.

The Arctic OCS contains oil and gas resources managed by the federal Bureau of Ocean Energy Management, Regulation and Enforcement (BOEMRE). Every five years, this federal agency must prepare a new plan for offshore oil and gas lease sales. BOEMRE is obligated to examine the potential environmental impact of its leasing program and must balance the benefits and risks of development. 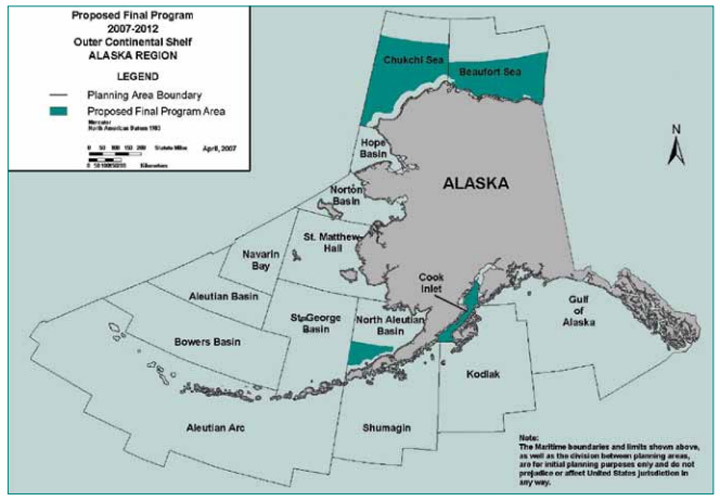 A federal court determined that BOEMRE's current national offshore oil and gas leasing program (2007-2012) did not properly evaluate the environmental sensitivity of the marine ecosystem and balance the benefits and risks of development in the Arctic. And on March 31, 2010, President Obama cancelled all remaining lease sales in the Arctic Ocean until 2012 and withdrew Bristol Bay from leasing until 2017. The 2007-2012 leasing program had called for the following oil and gas lease sales off Alaska's coast:

Once leased, these areas are subject to seismic and other exploratory activities.