The annual salmon spawning run from the Pacific Ocean to the Northwest’s rivers and streams is a life-and-death struggle against obstacles both natural and manmade. Enough fish must succeed in order for the ecosystem—far upstream from the ocean—to stay healthy. To learn more about these species and the challenges they face, The Pew Charitable Trusts spoke with Ed Bowles, administrator of the Fish Division of the Oregon Department of Fish and Wildlife. This interview has been edited for clarity and length.

Q: Salmon and steelhead are keystone species. What does that mean?

A: That means they literally nourish the ecosystem.

Most Pacific salmon die after they spawn. As their carcasses decompose or are eaten, they help to transport marine nutrients that aren’t found anywhere but in the oceans. And these nutrients flow back into the watershed and nourish the entire ecosystem.

Many of these watersheds, like Idaho’s Frank Church-River of No Return Wilderness, don’t have a lot of nutrient holding capacity due to their granitic geology. So after these salmon die, they really jump-start the entire ecosystem there, all the way through the watersheds into the trees and terrestrial species. It’s just remarkable how far the tentacles of the salmon reach. Both alive and dead, salmon provide food for many species.

Q: How do other animals rely on salmon?

A: Some populations of orcas, for example, really need this forage. They have evolved to utilize salmon almost exclusively. And their preference is Chinook salmon.

Imperiled southern resident orcas have been impacted primarily by three things: toxins; noise in the water interfering with echolocation, which they use to find prey and communicate; and—the real big issue—the decline in salmon, which is starving the whales and causing a lot of problems with their ability to give healthy birth.

And the salmon are declining largely because of habitat deterioration, dams, and culverts.

A: This is truly a miracle of nature. They have figured out that the best nursery grounds are cool, low-gradient alpine rivers. These upper headlands with cold water and clean gravel are the best place for young fish to spend the first months of their life prior to migrating to the ocean. They’ve also figured out that the best place to find the “groceries” that allow them to put on the feed bag, so to speak, and grow to adulthood is in the ocean. So, the dilemma is, how do these fish get from these wonderful alpine nursery areas to these ocean feeding grounds in an effective way?

These 3- to 4-inch juvenile fish are incapable of making the up to 1,000-mile journey under their own power, so they evolved and prospered for millennia by riding the wave of spring snowmelt out to the ocean.

And as they’re migrating, new chemical signatures, or smells, are imprinted on them. When they begin the return to their headwaters to spawn, they can literally smell their way, often all the way to the very gravel bar they emerged from.

Q: How do dams impact rivers and fish?

A: Dams can totally block or severely impede juvenile and adult migrations. Dams turn free-flowing rivers into a staircase of flat-water reservoirs. This is a big problem, particularly for juveniles coming down with the spring snowmelt.

In the dammed lower Snake and Columbia rivers, for example, the water now travels up to 20 times slower than it did historically. Juvenile fish now have to swim downstream rather than ride the spring thaw. They must navigate the reservoirs with warmer and slower water than rivers, and many more predators. Then they have to get past the concrete of a dam and deal with the effects of that passage. The migration through these challenging conditions causes direct mortality. And it also causes delay and stress, which leads to additional mortality, which plays out during that first year in the ocean.

Q: Are there any solutions?

A: We need to make it easier for fish to successfully migrate, ideally in a free-flowing river. That means considering some large-scale dam removal but also includes fixing culverts and other barriers. Even a small obstruction like a hanging culvert can block dozens of miles of quality habitat. So, it’s very important to identify those barriers and begin healing up those blockages in the arteries of the fish’s environmental circulatory system.

In Oregon, for instance, we have the Screens and Passage Program that works to replace and improve culverts and screens irrigation diversions so that young fish aren’t spread out on fields when folks are watering crops.

Q: What are the biggest threats facing fish populations across the West?

A: Climate change is by far the biggest challenge we as scientists and fish management professionals deal with in trying to sustain wild native populations.

Migratory fish in the Northwest need free-flowing rivers, and spring migrations are driven by snowmelt. A lower snowpack means lower spring flows and warmer water, which wreaks havoc on the fish’s ability to survive. Also, the ocean is absorbing a lot of carbon dioxide and acidifying. And that causes problems throughout the food chain.

Although climate change is the big freight train, it exacerbates habitat problems that are already hurting native fish populations, such as dams, riparian deterioration, water withdrawals, and culverts. That makes our work on those fronts even more important.

Q: How do fish play into the economy?

A: The Northwest is salmon nation. These fish have held cultural, economic, and spiritual importance for Native Americans since time immemorial, and to the rest of us since our ancestors arrived. We also have fisheries for inland trout, warm-water species, and commercial and sport species that are extremely important for Oregon’s economy. An American Sportfishing Association study estimates that anglers spend approximately $840 million annually in Oregon, generating about $1.4 billion in economic output and about 12,600 jobs annually.

These fisheries must continue to be grounded on a platform of conservation that ensures these wild native species persist now and into the future. We don’t fish at the expense of this foundation of conservation. We fish because of it.

Q: How do river protections play into this?

A: Very few of our rivers are actually designated as protected resources.So we use other vehicles, whether it be the Endangered Species Act or state water quality and quantity standards, to try to get at ensuring these watersheds are protected.

I’m always an advocate of a balanced approach, but we have a long way to go before the balance is equitable for the fish in the watershed.

Q: What can people do to help fish survive and thrive?

A: Each person is vital, and our individual efforts roll up into a collective voice that strengthens our ability to protect fish and their watersheds. We need to help more people be connected to the fish. For some, it may be fishing, and for others, it may be cultural or spiritual. Passion is contagious. We encourage folks to get involved at the local watershed level and the broader level, holding decision-makers accountable.

For National Rivers Month, Find Out Which River Species You Are

For National Rivers Month, Find Out Which River Species You Are

Are you most like a beaver, damselfly, salmon, Oregon spotted frog, river otter, hellbender, or Gila trout? These are just some of the thousands of species critical to healthy North American rivers. Let’s see which one you identify with. On to the quiz!

Some federal lawmakers recognize the value of intact public lands and waters and are moving to protect parts of northwest California’s landscape, including prime salmon and steelhead habitat. 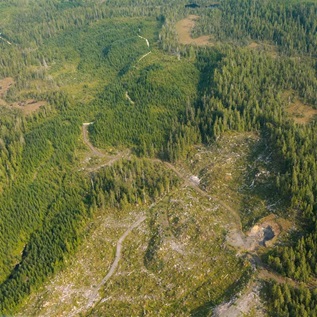