Disaster costs are on the rise. In the aftermath of 2017’s historic hurricanes and wildfires, Congress provided one-time funding of nearly $140 billion. And eight of the most expensive years on record for the Federal Emergency Management Agency (FEMA)’s largest disaster assistance program occurred in the decade that ended in 2016.

But as the federal government looks to manage this growing price tag in ways that could affect states, it is doing so without critical information about what states already invest, according to experts at a July panel discussion hosted by The Pew Charitable Trusts. The event highlighted key findings from Pew’s recent report “What We Don’t Know About State Spending on Natural Disasters Could Cost Us”—specifically, that most states do not track expenditures across all agencies and phases of disaster.

Two state emergency management officials and an expert with decades of experience in these issues shared why better information on state investments is important and how policymakers could achieve more comprehensive tracking. Here are four main takeaways:

Most states do not track natural disaster spending comprehensively

Although the state tracks disasters that receive a presidential declaration, effectively because of stringent federal reporting requirements, Flinn said the “challenge is really the smaller events,” where damages do not reach the threshold required to receive federal assistance. For these events, Pennsylvania does not have a system to track spending across the various agencies involved in the “all hands on deck” approach to disaster assistance. The Pew report found that the large number of agencies involved in disaster assistance often complicates data collection.

Pew’s report highlights efforts by Congress, the Department of Homeland Security Inspector General and FEMA, as well as the Government Accountability Office, to manage growing federal disaster costs that could result in shifting costs to the states. Elizabeth Zimmerman, former associate administrator and director of disaster operations at FEMA, underscored the importance of state data to inform these federal proposals.

“From my time at the states and then at the federal level, this data is needed, and it is going to be required,” said Zimmerman, now a senior executive adviser at IEM Inc.

More comprehensive spending information would allow for cross-state comparisons to help inform state and federal decision-making. Agreed-upon definitions and data points for collection would make the process easier. Zimmerman cited the development of the National Qualification System, a FEMA-led effort to standardize job and skill requirements for emergency management personnel as a model. That effort engaged stakeholders to define terms and objectives because each state and territory needed to be “able to understand and have input into what that national system would look like,” she added. Pew’s report recommends a nationwide coordinated effort to collect 50-state, comparable data on state disaster spending.

First, in participating in Pew’s survey, Ohio EMA leveraged a network developed over four years as part of FEMA’s National Disaster Recovery Framework. That meant staff could quickly identify and collect data from many agencies within the 29-agency State Recovery Partners group.

Then, based on Pew’s request and ongoing conversations about improving cross-agency data collection, Ohio piloted and eventually adopted a policy to track spending for all disasters for which their state Emergency Operations Center is activated. According to Adcock, Ohio EMA coordinated closely with the state Office of Budget and Management to develop a new coding system for state-level disaster expenditures. When flooding struck this February, Ohio EMA worked with chief financial officers at the other agencies involved to use the code to track spending. Using lessons learned from that experience, the policy was finalized in July 2018.

Flinn noted that establishing a centralized statewide disaster fund could also facilitate more comprehensive tracking of spending. He has proposed such a fund for Pennsylvania. Zimmerman emphasized the importance of putting a system in place. “If you don’t start now, it is not going to happen,” she said, adding that better tracking will require support from all levels of government. That also echoes Pew’s recommendation that policymakers at all levels make improved data collection a priority.

Better tracking could highlight the benefits of mitigation efforts

Research by the National Institute of Building Sciences shows that $1 invested in mitigation can save an average of $6 in recovery costs. Federal policymakers want to encourage states to fund these activities, and Pew’s research found that some are already doing so. Panelists cited the importance of more comprehensive data to tell the stories of mitigation successes.

Adcock noted that Ohio EMA has a robust mitigation unit. The state has an online dashboard that shows the number of properties that have received mitigation funding to date, the dollar amount in damages prevented, and maps to show where the state has spent resources on mitigation. Policymakers plan to use that information to identify and highlight best practices.

If mitigation data were available on a national scale, Flinn said, state policymakers could see the impact of those investments and use other states’ experiences to argue for making mitigation spending a priority. As the Pew report states, better tracking of state spending across the phases of a disaster would support decisions to allocate more money to cost-saving mitigation measures.

Insights from state emergency managers and disaster assistance experts confirm that while there are challenges to collecting comprehensive data on state natural disaster spending, improving tracking is both critical and possible. Federal efforts will continue to focus on managing rising costs in ways that will affect states.

Collecting more complete data is key to informing those proposals, especially for state spending on disasters and cost-saving mitigation activities in an era of increasingly expensive, frequent, and severe disasters.

Anne Stauffer is project director and Colin Foard is a senior associate with The Pew Charitable Trusts’ fiscal federalism initiative.

What Do States Spend on Natural Disasters?

What Do States Spend on Natural Disasters?

Government spending on natural disasters is on the rise. The Federal Emergency Management Agency’s largest disaster assistance program had eight of its most expensive years in the decade from 2007 to 2016. 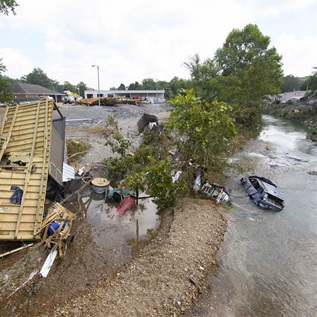