Many small-business owners and managers don’t have a good feel for how much they or their employees pay in fees to their retirement plans, according to a survey conducted by The Pew Charitable Trusts.

The survey results indicate that many of these business leaders—like many workers—have limited knowledge about plan fees, a reality that can be detrimental to workers’ long-term finances. Whether savers pay high or low fees on their investments can make a large difference over time in the growth of retirement savings.

Managers and owners of these businesses serve as fiduciaries for the plans they offer and therefore must choose funds that are appropriate for participants. While other factors can and should influence the selection of investments in a plan, plan sponsors need to read and understand available fee information. That information, however, can often be hard to find and also can be confusing for plan sponsors and covered workers. 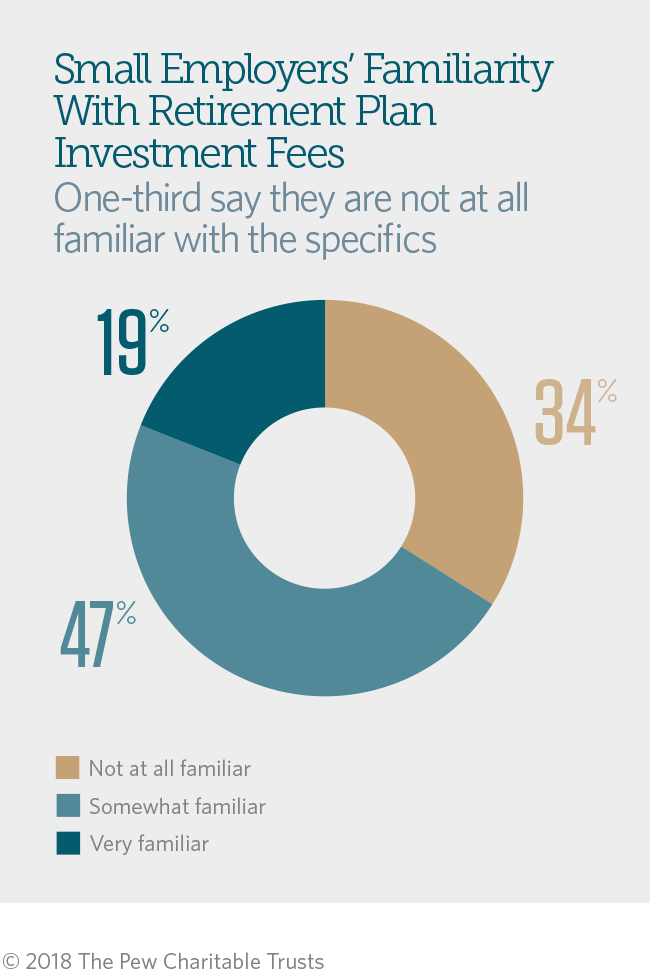 Fees change, so employers should review them regularly

That means a greater percentage of business decision-makers said they had not recently examined the disclosure than the approximately one-third who said in a separate question that they were not at all familiar with their plan fees. But the fees can change from year to year, so sponsors benefit from regularly reviewing the disclosures. Those who do not may overestimate their knowledge—and their ability to choose the right mix of plan offerings for their workers. 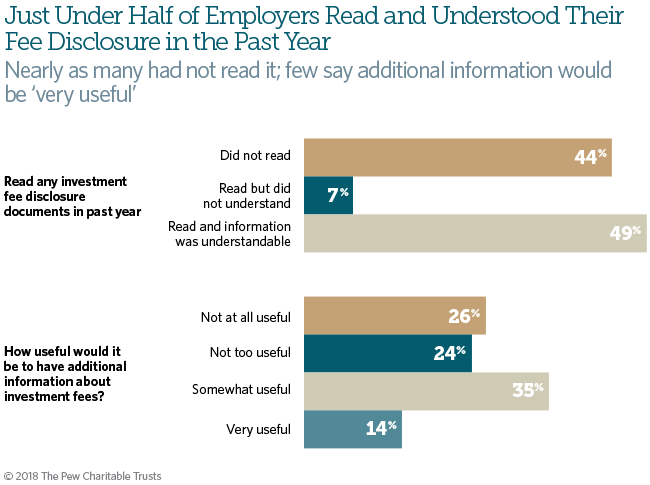 But decision-makers were divided on the benefit of more information. About half said additional information would be “somewhat” (35 percent) or “very” useful (14 percent), while a nearly equal share said this would be “not at all” (26 percent) or “not too” useful (24 percent).

Analysis of survey findings shows that those who said that they had read but did not understand plan disclosures were more than three times as likely as other business leaders to say that additional information would be “very useful.” Also, an examination of which employers read disclosures—regardless of their understanding—showed that those with fewer employees were less likely to have done so.

Because a better understanding of fees is so important for both workers and plan sponsors, federal officials have recently taken steps to increase transparency and make the details easier to comprehend. For example, the U.S. Department of Labor in 2012 set standards for financial services companies that provide defined contribution plans, such as 401(k)s. The 2012 standards require them to present fees more uniformly: as a percentage of assets and as a dollar amount for each $1,000 invested.

The format should make it easier to compare the costs of available funds, but some advocates say the requirements don’t go far enough and could be simplified further and have suggested alternative formats with greater transparency. The North American Securities Administrators Association, which represents state securities regulators, says investors are confused and uninformed about financial services fees generally, not just those for retirement plans.  Like the Labor Department rules, the association’s suggested format would provide fees in dollar amounts, as well as information on how often the fees are charged.

The Center for American Progress, meanwhile, has advocated for disclosures by financial services companies—for print and online products—that are presented simply, similar to a product warning label, to allow for easy cost comparisons. Plan sponsors would see the broad comparisons of the fees for various plans when considering which to offer, while workers would see them when making investment choices.

Because so many small-business leaders have limited knowledge of plan fees, more research on how they understand and learn about these fees could help them make more informed choices about the benefits offered to workers. That research could include comparisons of disclosure proposals.

Earlier work by Pew showed that leaders of many small businesses may not offer retirement plans because their companies lack the administrative capacity to do so. Finding ways to help these decision-makers analyze and compare features, such as fees, could encourage more to sponsor plans. Most importantly, increasing awareness among employers and workers about the impact of fees on long-term savings will probably improve retirement security more broadly.

John Scott is a director and Sarah Spell is a senior associate with The Pew Charitable Trusts’ retirement savings project.