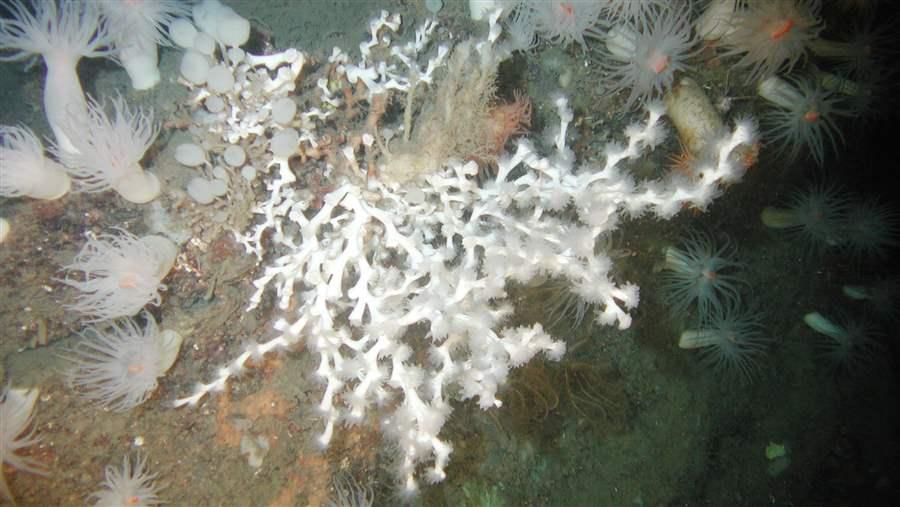 A colony of Lophelia pertusa coral is attached to a large boulder deep in the Gulf of Mexico. A variety of anemones share this habitat.

In the cold, dark depths of the Gulf of Mexico live some of the world’s oldest and slowest growing organisms: deep-sea corals. Some grow to hundreds of feet tall while others live for thousands of years, and all of them are key players in the marine ecosystem, providing food and habitat for an array of species.

Deep-sea corals are also vulnerable, and now you have a chance to help protect these ancient treasures.

Federal fishery managers are accepting comments—and will host public hearings and a webinar in the coming weeks—on a proposal to protect up to 23 hotspots for deep-sea corals and sponges. These fragile ecosystems face threats, mainly from damaging fishing gear but also from oil and gas development, and changing ocean conditions. And once damaged, slow-growing corals can take centuries to recover, if they survive at all.

The Gulf of Mexico Fishery Management Council, which governs fishing in the Gulf’s federal waters, is expected to vote at its meeting June 18- 21 in Key West, Florida, on a proposal to restrict some fishing gear to help protect these special places that provide food, shelter, and breeding grounds for sharks, starfish, squat lobsters, crabs, and many species of fish, including grouper and snapper. Deep-sea coral communities, which are difficult and expensive to document and study, are also natural disease fighters: They hold important properties that are producing treatments for some cancers.

You can urge managers to protect these corals by signing Pew’s action alert here. You can also write directly to council members here. And you can attend one of eight public hearings or a webinar. The public hearings will be held from 6 to 9 p.m. local time. Dates and locations include:

To learn more, watch our video or read more about these special ecosystems.