A decade after the start of the Great Recession, 34 states—the most yet—were taking in more tax revenue at the end of 2017 than before receipts plunged in the downturn, after accounting for inflation. Total state collections surged in the fourth quarter, but some of the spike was temporary as taxpayers rushed to take advantage of certain federal tax breaks set to be curtailed in 2018.

In the fourth quarter of 2017, state tax revenue collectively swelled to a new high of 9.1 percent above its 2008 peak during the recession, after adjusting for inflation and averaging across four quarters to smooth seasonal fluctuations. That was up from 7.2 percent in the previous quarter and among the largest jumps in quarterly tax revenue since the economic recovery began.

After nearly two years of weak tax revenue growth, many states reported robust gains for the end of last year as Congress prepared to pass the Tax Cuts and Jobs Act. An unusually large number of states—15—saw revenue spike by at least 10 percent in the fourth quarter of 2017 compared with the same period a year earlier.

Some growth was driven by taxpayer behavior, resulting in a one-time revenue bump. Taxpayers—especially high-income earners—had an incentive to accelerate the timing of payments to states before a long-standing tax break was cut back under the tax law passed last year. The federal deduction for state and local tax payments was capped at $10,000 beginning this year.

But the growth spurt may be short-lived. States can expect weaker growth in the first quarter of 2018, according to the Nelson A. Rockefeller Institute of Government. Collections this year also face uncertainty from the effects of federal tax changes because income tax rules in most states are linked in some way to the federal tax code, and federal rule changes can affect states’ collections. As states come out of a period of exceptionally slow revenue growth, the volatile revenue pattern ahead poses a new challenge. 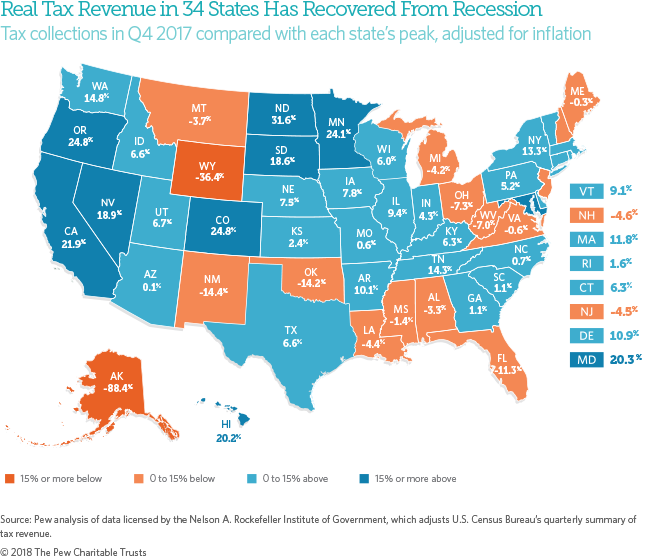 The latest results mean that the 50 states combined had the equivalent of 9.1 cents more in purchasing power in the fourth quarter of 2017 for every $1 they collected at their peak in 2008.

Total state tax revenue has rebounded more slowly after the 2007-09 recession than it did after any of the three previous downturns. But trends have varied widely by state. In nine of the 34 states in which collections had recovered from their recession losses by the fourth quarter of 2017, tax revenue—and thus purchasing power—was more than 15 percent higher than at its peak before or during the recession. Conversely, collections were down 15 percent or more in two of the 16 states in which tax revenue was still below peak.

Ten years after the recession started in December 2007, a comparison of tax receipts in the fourth quarter of 2017—with each state’s peak quarter of revenue before the end of the recession—averaged across four quarters and adjusted for inflation—shows:

State tax collections rose sharply in the fourth quarter of 2017, which was halfway through most states’ 2018 budget year. All major tax streams recorded stronger gains, including sales taxes, which have consistently trailed the growth seen in past economic expansions.

The largest gains were in personal income tax collections, in part because of taxpayer behavior in response to the federal tax changes passed at the end of the year. Additional gains in some states came from payments that hedge fund managers made on earnings required to be returned from offshore accounts by the end of last year, according to the Rockefeller Institute. Robust stock market growth throughout 2017 also contributed to income tax receipts’ strong performance, while rising energy prices benefited tax collections in states that depend on fossil fuel production.

Just six states saw drops in inflation-adjusted tax dollars in the fourth quarter of 2017, the fewest since the second quarter of 2013. Despite the unusually strong performance at the end of last year, state tax revenue—like the U.S. economy—has grown slowly and unevenly since the recession. Throughout much of 2016 and 2017, collections were stymied in certain states by sagging energy and crop prices, and nationwide by weak wage growth. More broadly, consumer spending has been migrating toward services and online purchases that are less likely to be taxed.

Looking ahead, the federal tax cut passed in December incorporates a range of changes to federal tax exemptions, deductions, and credits that could carry over and trigger changes in state tax collections. Some states have altered their tax codes in response to federal action.

Over the past 10 years, the number of states that have regained their tax revenue levels has risen and fallen, reflecting volatility in state tax collections as well as tax policy changes. 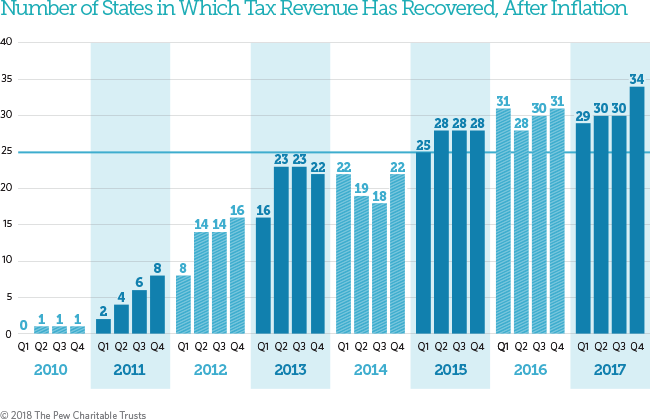 State policymakers also have contributed to revenue trends, enacting tax cuts in states such as North Dakota and Texas and hikes in states such as Louisiana and Washington. According to the National Association of State Budget Officers, states in the past three fiscal years have enacted more tax increases than cuts overall, while doing the opposite in fiscal years 2014 and 2015.

State budgets do not adjust revenue for inflation, so tax revenue totals in states’ documents will appear higher than or closer to pre-recession totals. Without adjusting for inflation, 50-state tax revenue was 25.2 percent above peak and tax collections had recovered in 47 states—all except Alaska, Oklahoma, and Wyoming­—as of the fourth quarter of 2017. Unadjusted figures do not take into account changes in the price of goods and services.

Download the data to see individual state trends from the first quarter of 2006 to the fourth quarter of 2017. Visit The Pew Charitable Trusts’ interactive resource Fiscal 50: State Trends and Analysis to sort and analyze data for other indicators of state fiscal health.

Taxes make up almost half of state government revenue, with the bulk coming from levies on personal income and general sales of goods and services. This infographic illustrates the sources of each state’s tax revenue, showing percentages for the two largest streams.