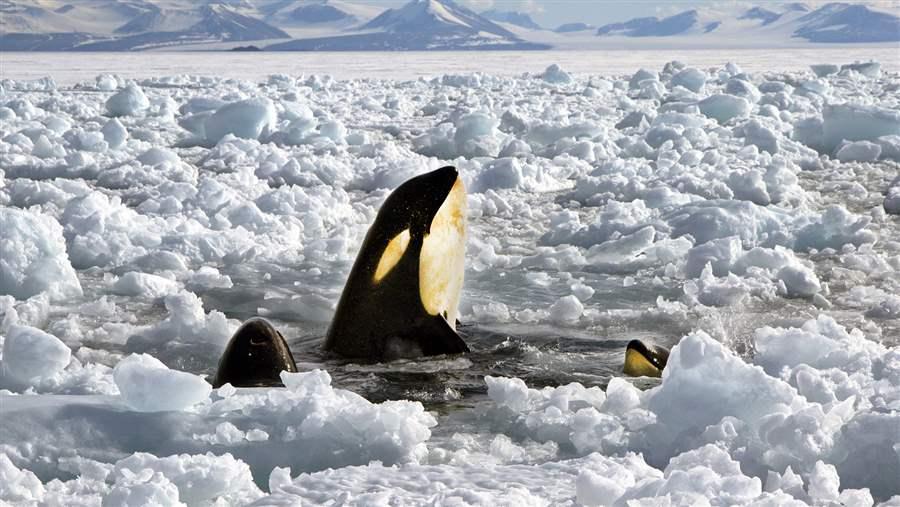 Carefully sliding to the edge of the Antarctic ice, Regina Eisert reached out and offered her hand to the curious juvenile whales that had come to check out the scientists. The inquisitive whales surfaced, as they did almost daily for five weeks this January and February, near an array of acoustical and video equipment that recorded their images and vocalizations.

Eisert, a research scientist at the University of Canterbury in Christchurch, New Zealand, and 2017 Pew marine fellow, was in the Ross Sea Region Marine Protected Area (MPA), which covers 2.06 million square kilometers (almost 800,000 square miles) of the Southern Ocean. She and her team came here to learn more about fish-eating Type C killer whales. These whales are a sentinel species for the effectiveness of the MPA, which carries heavy restrictions on fishing, including bans in some zones. Although the MPA entered into force only recently, Dec. 1, the researchers hope to determine if changes in fishing for species like Antarctic toothfish is affecting whale numbers. 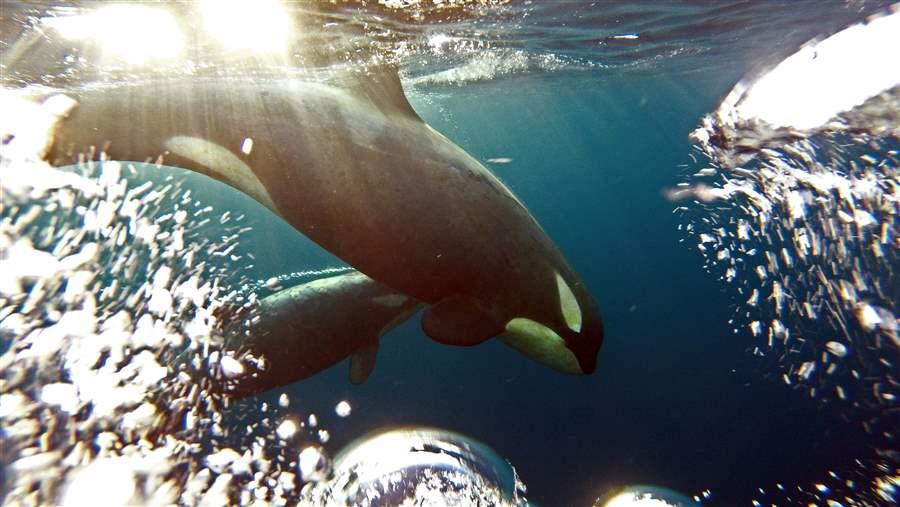 Playful young Antarctic killer whales blow bubbles at a camera deployed by scientists in the Ross Sea. Type C killer whales travel thousands of miles between subtropical regions and Antarctica, where experts believe they come to feed, in particular on Antarctic toothfish.

"We have to actively show with scientific evidence, using research and monitoring, whether the MPA is doing its job and is effectively protecting the marine environment," says Eisert, who plans to return to the area around the same time next year.

Type C killer whales are the smallest Southern Hemisphere orcas, reaching about 6 meters (20 feet) in length and are thought to be the southernmost type of killer whale. They are also opportunistic: Every January, after a supply ship cuts a channel in the sea ice en route to research stations on McMurdo Sound in the Ross Sea, the whales move in. This “whale highway” provides a unique opportunity for scientists to get up close to these animals.

Eisert and her team also collect small tissue samples with a low-impact biopsy dart gun. Skin and fat biopsies offer clues to the whales’ diet (from stable isotopes) and enable genetic analyses that can provide insights into population structure and taxonomy. The biopsies also help experts determine the animals’ hormonal status (stress and reproduction) and exposure to pollutants.

Underwater sound recordings will help the team create a basis for acoustic monitoring of the MPA. The technique, called passive acoustic monitoring to distinguish it from active echo sounders such as those used in fish finders, is effective for studying whales, including species that are not easily sighted, and has no impact on the whales. The scientists hope this work will also help them assign calls to specific groups and individuals, and reveal patterns in the whales’ movements. 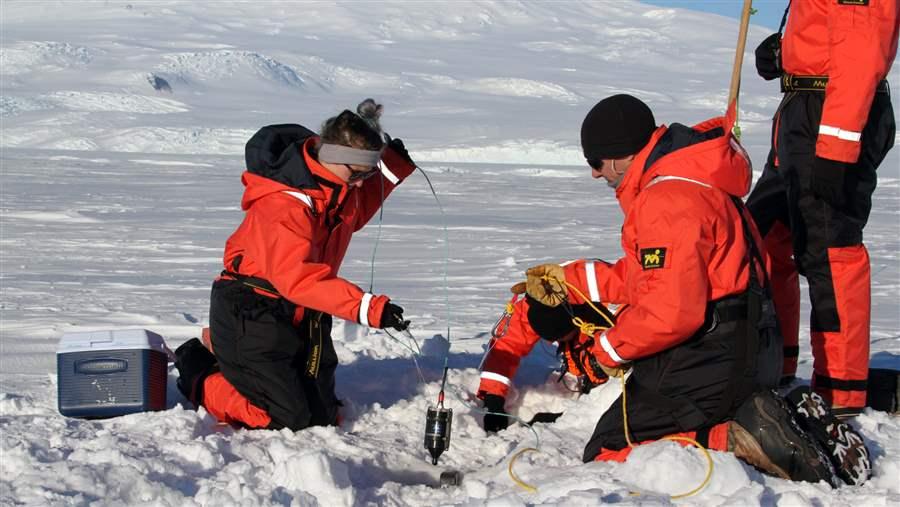 Team members Alexa Hasselman, left, Andrew Wright, and Tom Arnold lower a recorder known as a sound trap through a hole in the sea ice. It is among the many tools the researchers are using to study whales remotely.

“Initially, we were worried that we wouldn’t be able to find any whales in the channel, but as soon as we installed the first array, we had visitors,” Eisert says.

Unlike many marine mammals, Type C orcas are right at home in the dense ice pack that keeps out most other types of killer whales, Eisert says. During the Antarctic summer, the cetaceans stay close to the edge of the ice as it recedes southward and often surface through small openings to breathe or “spy hop”—poke their heads high out of the water for views of their surroundings. 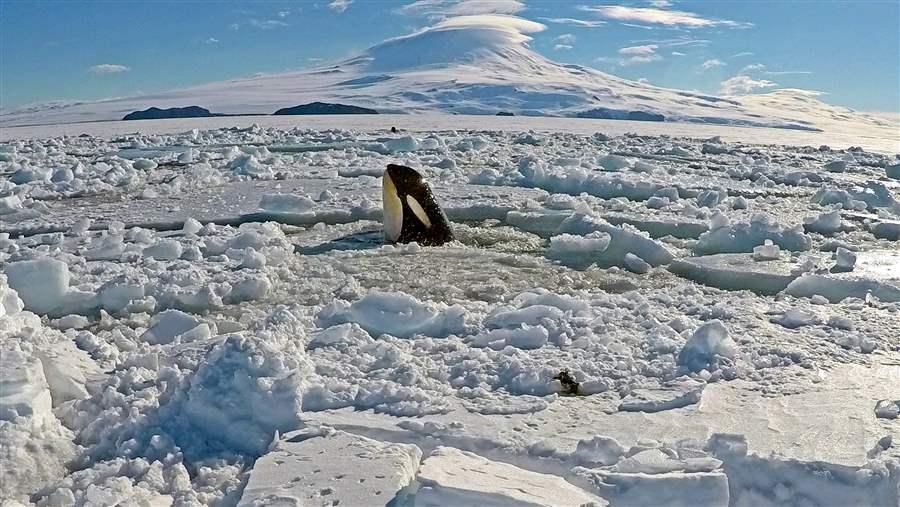 A curious Type C killer whale surfaces in front of the multimedia station set up to capture whale data. Arrays containing cameras and hydrophones are deployed along the icebreaker channel in McMurdo Sound. Mount Erebus, an active volcano, is visible in the background.

This expedition is laying the groundwork for larger-scale acoustic monitoring of numerous species of whales in the Ross Sea region.

The team was also able to record the first underwater video footage of a minke whale in the Ross Sea region. Minke whales are an understudied but likely important player in the ecosystem and appear to travel farther south than any baleen whale in Antarctica.

As part of her Pew fellowship, Eisert is developing and testing low-impact tags to track whales by satellite over long distances to help understand their migrations and identify key foraging and breeding areas. These would be a significant improvement over current tags (other than that short-term ones that are attached with suction cups). The new tags are deployed by shooting a barbed steel pin into a whale’s back or dorsal fin. Eisert’s team plans to test the tags on New Zealand whales before attempting to use them in Antarctica.

What makes some coral colonies more resilient to warming ocean temperatures? How can fishery managers help ensure sustainable populations of marine life? What do changing conditions in the Southern Ocean mean for the future of penguins?

Regina Eisert, Ph.D., is a research scientist who studies marine mammals, nutritional ecology, and mammalian physiology. She leads a research program on top Antarctic predators and studies the biological and political factors that shape big-picture marine conservation in Antarctica. She collaborates with scientists at multiple institutions and government agencies to foster understanding and effective protection of the Southern Ocean’s Ross Sea ecosystem.

The first time she saw blue whales off Sri Lanka, Asha de Vos knew she had found her heart&rsquo;s calling. In addition to being a Pew fellow, marine biologist, and founder of the Sri Lankan Blue Whale Project, de Vos is also an amateur photographer. Her images help track individual whales to paint a picture of their travels, behaviors, and population sizes as they also educate and inspire followers of her popular Instagram feed.