Of the thousands of species that thrive in the icy waters of the Southern Ocean, a few—a celebrity parade of various penguins and whales—regularly steal the spotlight. But the marine environment off Antarctica supports a wide range of other creatures, among them a huge number of seals.

While scientists don’t have an estimate of just how many seals live on Antarctica, they’re trying to solve that question, and you can help by joining a research team of citizen scientists counting Weddell seals with the help of satellite imagery. And because March 22 is International Day of the Seal (yes, that’s a real thing—the U.S. Congress declared it in 1982), let’s meet four species of these charismatic aquatic mammals that prosper in Antarctica and the Southern Ocean. 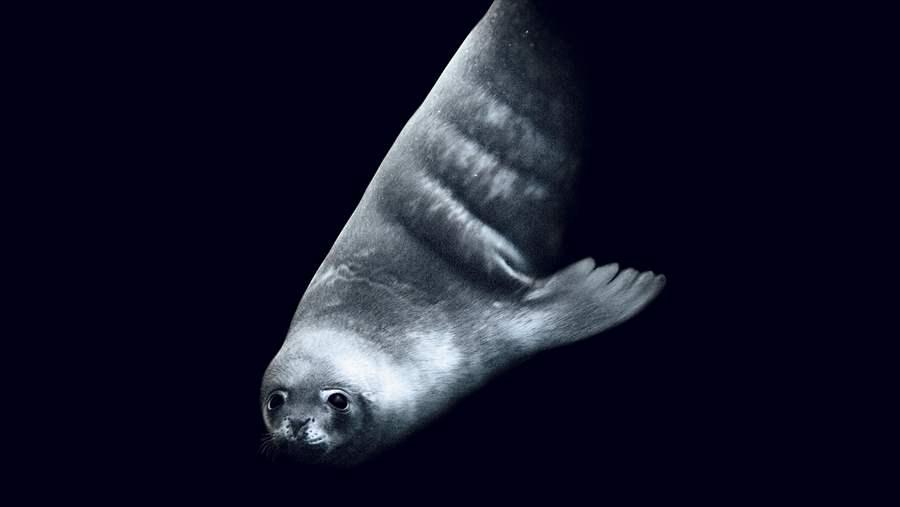 Weddell seals are endemic to the Antarctic and live farther south than any other mammal. These skilled predators can dive for more than an hour and reach depths below 1,900 feet (580 meters). They also use their teeth to scrape open breathing holes in the ice and are highly vocal, using sounds to stun prey underwater. Weddell seals can grow up to 10 feet (3 meters) in length and weigh as much as 1,200 pounds (545 kilograms). They are also homebodies, rarely straying more than a few miles from where they were born. While Weddells are protected under the Antarctic Treaty and the Convention for the Conservation of Antarctic Seals, their food sources, such as Antarctic toothfish and krill, are under increasing pressure from industrial fishing.

In 2011, the Commission for the Conservation of Antarctic Marine Living Resources (CCAMLR), which is tasked with protecting the Southern Ocean’s biodiversity, committed to create a network of marine protected areas (MPAs) that would provide long-term protection for species in the region.

CCAMLR is considering a proposal to create a marine reserve in the Weddell Sea covering 700,000 square miles (1.8 million square kilometers). The protected area would help safeguard the remote, ice-covered embayment east of the Antarctic Peninsula, which is home to one of the least disturbed marine ecosystems in the world, an area that includes the nutrient-rich benthic zone. 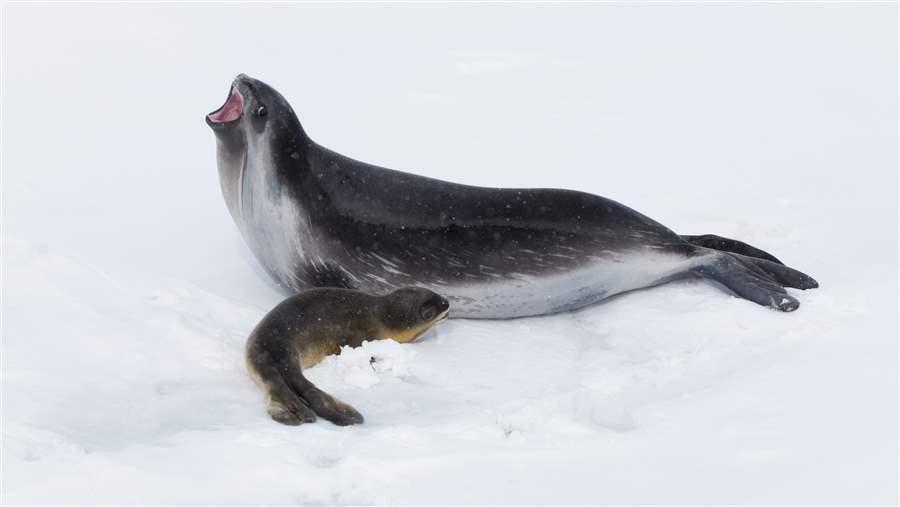 Ross seals are the rarest of the pinniped species that breed on the ice in Antarctica, and little is known about them. Like the Ross Sea, where the largest population of this species is found, these seals are named after the British explorer Sir James Clark Ross. They feed mostly on squid but also eat fish and krill. Scientists believe this seal’s large eyes are a clue that they can dive deep to feed. Also known as the singing seal because of the distinct sounds it makes, the Ross seal is hunted by both orcas and leopard seals.

In 2016, CCAMLR designated the world’s largest protected area in the Ross Sea, covering close to 800,000 square miles (2.07 million square kilometers) of what scientists have dubbed “the least altered marine ecosystem on Earth.” These protections not only safeguard critical habitat for all marine species in this sea, including Ross seals, but also establish a relatively undisturbed area where research and monitoring can help scientists understand the effects of a warming ocean on the region’s marine ecosystem. 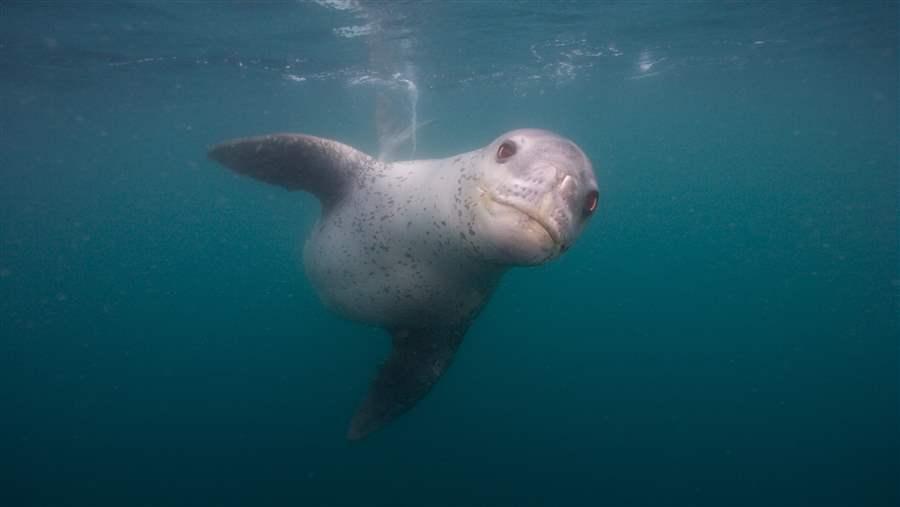 Leopard seals are at the top of the Southern Ocean food web and are preyed on only by killer whales. With massive jaws, big eyes, and lithe bodies, they are ideally suited for stalking, hunting, and grabbing their prey, which consists of smaller seals, penguins, seabirds, cephalopods, fish, and krill. Leopard seals are solitary, and only females and pups are seen in pairs. These animals are very curious and have been known to approach and grasp people. The species lives mostly in the Antarctic Peninsula region but has also been spotted near penguin rookeries around the continent, including in East Antarctic.

CCAMLR is considering a proposal to establish a large MPA in the peninsula region because this area has experienced the impacts of a changing climate more than almost anywhere else on Earth. These shifts, which include substantial declines in sea ice formation and winter habitat for wildlife such as leopard and crabeater seals and Antarctic krill, are putting a strain on this fragile ecosystem and its remarkable biodiversity. An MPA here would minimize pressure on this ecosystem associated with concentrated krill fishing in coastal areas. 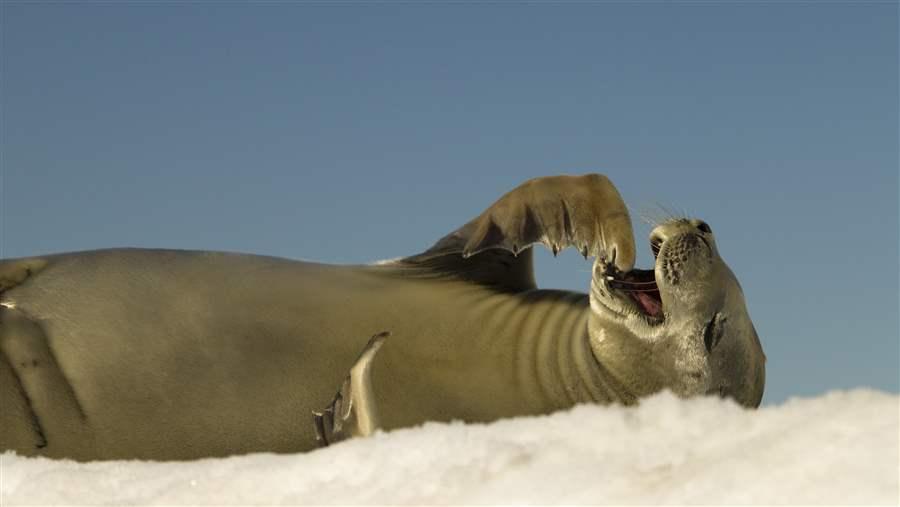 With teeth that help them filter krill from the water, crabeater seals could be called krilleater seals. They feed for up to 10 hours a night, often diving more than 100 times per feeding. Crabeaters are found farther inland than any other Antarctic seal species and are the fastest pinniped on ice. They were once thought to be the most abundant seal in the world, with estimates of over 1 million in the East Antarctic region, but scientists do not have a current reliable population estimate. In winter, these seals haul out on sea ice to rest. Due to significant reductions in sea ice coverage, it is critical that experts learn more about the crabeater’s seasonal distribution and numbers to help inform policies to protect their food sources.

CCAMLR is considering a proposal, separate from those above, that would create a “representative system” of MPAs in East Antarctica. Because scientists don’t have much data on this region, they believe that a system of protected areas is the best approach to safeguarding biodiversity here.

By designating reserves in the Weddell Sea and off East Antarctica and the Antarctic Peninsula, CCAMLR would continue momentum toward its commitment to create a network of MPAs in the Southern Ocean.

This would allow all of the region’s marine species, including the pinnipeds featured above, to travel between protected areas to breed and forage, while preserving ecosystem connectivity and research—a win-win-win for the region, its species, and humankind.