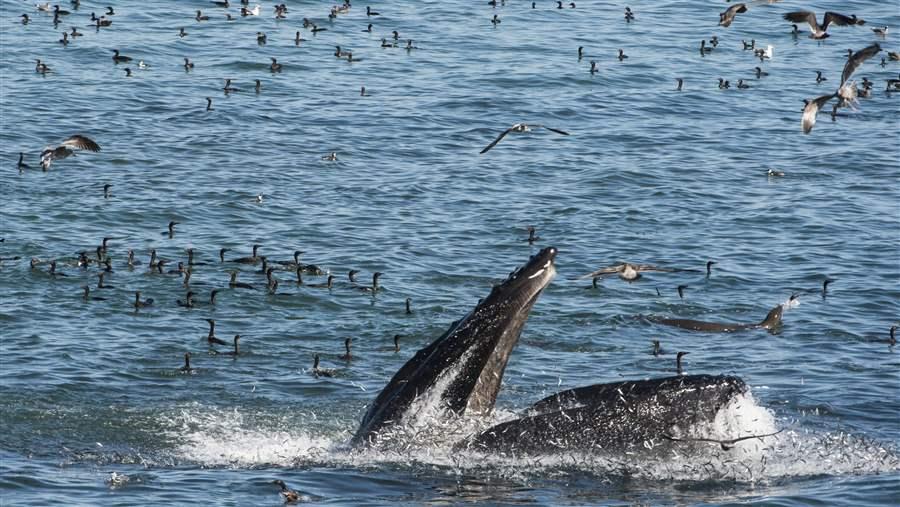 Most people recognize how ocean health affects the fortunes of commercial fishermen, seafood processors, and other players in the West Coast fishing industry: Favorable marine conditions help species—and the industry—thrive.

But a healthy Pacific Ocean is also important to a variety of other businesses—from whale watching and recreational fishing to coastal hotels, restaurants, and other enterprises—that depend upon tourists and other visitors for their livelihood. When ocean conditions are poor, wildlife that are essential to these businesses suffer, and many tourists take their dollars elsewhere.

One of the most overlooked elements in this equation is the northern anchovy. The nutrient-rich little fish is one of the most important food sources for whales, seabirds, and more than 50 other species that bring visitor dollars to the region. In short, the health of the northern anchovy population has a huge impact on West Coast marine tourism. In fact, speaking at a Feb. 22 town hall meeting, held at the Monterey Bay Aquarium and organized by The Pew Charitable Trusts, Jason Scorse of the Center for the Blue Economy said anchovy supports tens of thousands of jobs and generates billions of dollars in the Monterey area alone.

Despite this critical role, the fish doesn’t get much attention. Fishery managers haven’t officially counted the central subpopulation, which lives along the California coast, since the mid-1990s. Commercial catch limits are also decades out of date. And fishery managers have no mechanism for raising and lowering harvest levels as anchovy populations rise and fall. That doesn’t make sense given that anchovy populations can naturally fluctuate by more than 90 percent in a matter of a few years.

Scientists also tell us it’s important to set commercial fishing catch limits that ensure there is plenty of anchovy left in the water for dolphins, salmon, brown pelicans, and other wildlife that are integral to a healthy ocean and a thriving coastal economy. So why doesn’t the federal fishery management plan for anchovy account for that?

As Scorse and other panelists at the town hall noted, whale watching and other industries that generate significantly more money for the coastal economy than anchovy fishing don’t have a seat at the decision-making table. Instead, federal management—using data and harvest limits from the 1990s—focuses on the commercial fishing industry with little regard for how vital this species is to the broader ecosystem, and the West Coast economy.

The Pacific Fishery Management Council should take a more comprehensive approach to northern anchovy management. This means giving the concerns of tourism and other industries the consideration they deserve, particularly in places like Monterey Bay where these businesses contribute far more to the economy than almost any other industry except agriculture.

This is the smart, common-sense approach, and the most sustainable way of ensuring we have both a healthy ocean and vibrant economy far into the future.

More than 50 species of marine wildlife in the California Current ecosystem depend on northern anchovies as a vital part of their diets, including seabirds, larger fish such as salmon and tuna, and marine mammals like whales and sea lions.