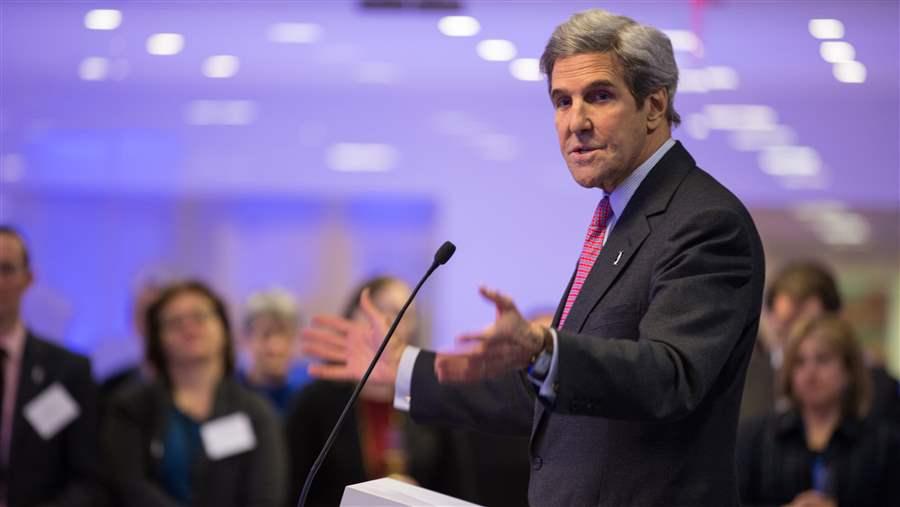 John Kerry played a key role in negotiations leading to the designation of the Ross Sea Region marine protected area, the largest protected area in the world.

Antarctica’s Ross Sea is best known as a frozen wonderland at the bottom of the Earth, home to most of the world’s penguins and teeming with marine species found nowhere else. These waters are also the origin of nutrients that upwell from the icy depths before riding currents to feed ocean life around the globe.

The Ross Sea is also the site of the largest protected area on the planet, and on Feb. 5 The Pew Charitable Trusts welcomed a crowd of Antarctic conservation champions, including former Secretary of State John Kerry, to celebrate the designation.

Secretary Kerry, who played a critical role in securing the Ross Sea Region Marine Protected Area (MPA), led the crowd in a cheer for the monumental accomplishment. He called the MPA, which covers almost 800,000 square miles, “just the beginning, a down payment on others in the Antarctic area that we believe can be achieved.”

The MPA designation by the 25 member governments of the Commission for the Conservation of Antarctic Marine Living Resources in October 2016 showed that the commission takes its role as guardian of Antarctica’s Southern Ocean waters seriously. The MPA entered into force Dec. 1, 2017, marking a milestone for global ocean conservation and international cooperation.

The designation safeguards an ecosystem that includes critical habitat for Adélie and emperor penguins, Weddell and crabeater seals, toothfish, and killer whales, as well as many prey species, such as Antarctic silverfish and krill. It also provides a vital global reference area for scientists studying the impacts of climate change.

The Pew event kicked off with a champions panel discussion on how successful international collaboration led to the creation of this vast MPA. Panelists included José María Figueres, former president of Costa Rica and vocal ocean conservationist; Lewis Pugh, the U.N. Environment Programme patron of the oceans and cold-water endurance swimmer; Slava Fetisov, a member of the Russian parliament and of two gold medal Olympic hockey teams in the 1980s; and Karen Sack, managing director of Ocean Unite and a former Pew director. The panelists discussed their individual contributions to making the Ross Sea Region MPA a reality, as well as their plans to establish a network of MPAs around the continent by 2020. 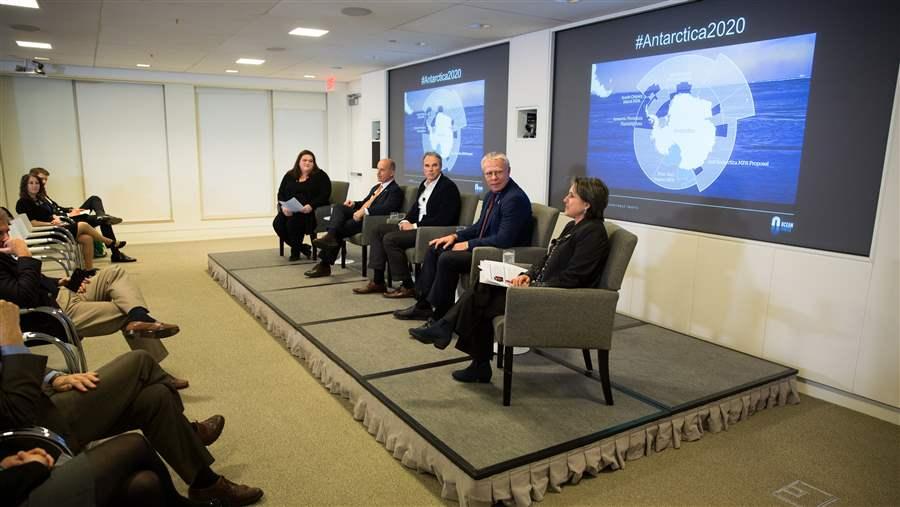 You can watch the panel discussion in its entirety here.

At a reception after the panel discussion, Secretary Kerry joined retired Senator John Warner (R-VA) and Rebecca Rimel, Pew’s president and CEO, in congratulating all who actively participated in the designation process. The three promised to support those continuing to advocate for MPAs in East Antarctica, the Weddell Sea, and the Antarctic Peninsula by 2020.