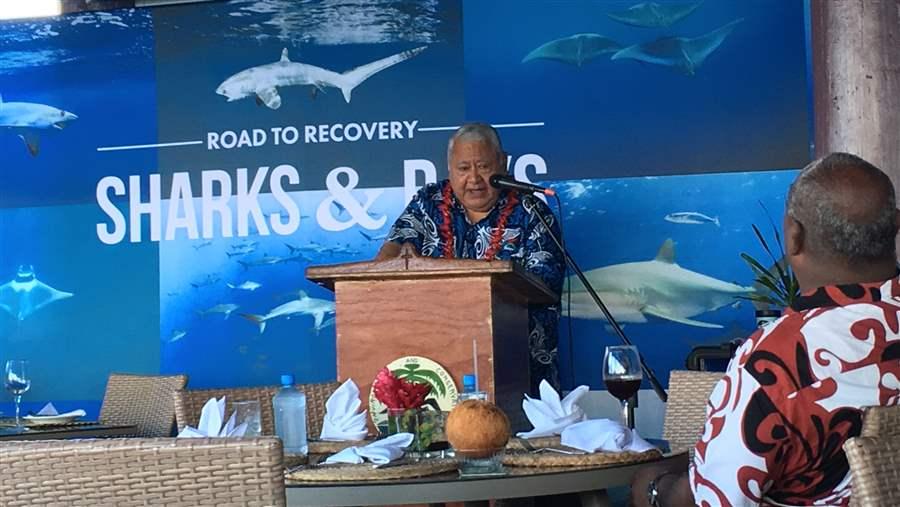 Samoan Prime Minister Tuilaepa Aiono Sailele Malielegaoi announced that the country is designating all of its national waters a shark sanctuary—the 17th such sanctuary in the world.

Note: This page was updated March 13, 2018, to include donor information on a shark conservation enforcement program.

The waters surrounding the South Pacific island nation of Samoa are prime habitat for nearly 30 species of sharks and rays, and today the government took a critical step toward protecting them. At a forum to celebrate the region’s history of strong shark conservation, Prime Minister Tuilaepa Aiono Sailele Malielegaoi announced that the country is designating all of its national waters a shark sanctuary—the 17th such sanctuary in the world.

The regulations ban commercial fishing and the possession, trade, and sale of sharks and shark products throughout Samoa’s 128,000-square-kilometer (49,421-square-mile) exclusive economic zone, and prohibits the use of fishing gear typically used to target sharks, such as wire leaders. Sharks are important to Pacific heritage and healthy marine ecosystems. Yet, at least 63 million and as many as 273 million sharks are killed every year in commercial fisheries globally. 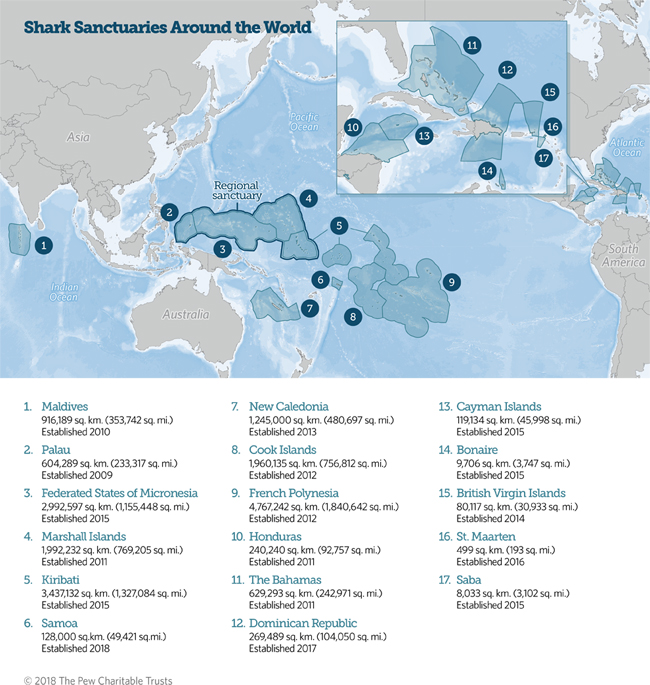 The announcement came March 1 at the beginning of the two-day Pacific Shark Ministerial Symposium in Apia, the capital, hosted by the Samoan government, the Secretariat of the Pacific Regional Environment Programme, The Pew Charitable Trusts, ad Paul G. Allen Philanthropies.

Ministers and senior officials from 10 Pacific island nations attended the symposium, which also highlighted past shark conservation actions and encouraged ministers to do more to protect these vital species.

The meeting also featured new technology, including a coral reef video-survey tool from Global FinPrint, a Miami-based research and conservation group. Ministers discussed how this data could be used to inform Pacific governments on conservation strategies best suited to shark species found in their waters, highlight places where sharks and rays are doing well, and help nations assess the effectiveness of shark and ray conservation policies. Global FinPrint’s survey of reef sharks revealed that the Pacific has a substantially higher abundance of sharks than do other regions—a credit to those who have enacted and are enforcing safeguards. The group also encouraged continued work to manage these critical species.

The Samoan government, in coordination with the secretariat and Pew, held a training workshop Feb. 27-28 for approximately 40 national customs, fisheries, police, and environment officers to prepare participants to effectively implement and enforce the sanctuary regulations. Attendees also discussed interagency coordination and ran through inspection and seizure scenarios. Pew and the APOC Fund, a donor-advised fund at the Boston Foundation, provided support for the program.

The Micronesia Regional Shark Sanctuary, the first of its kind, was created in the Pacific in 2015 and includes the waters of Palau, the Marshall Islands, the Federated States of Micronesia, and Kiribati—a contiguous swath of ocean larger than the European Union. Regional governments built on that momentum by supporting the 2016 listings on Appendix II of the Convention on International Trade in Endangered Species of Wild Fauna and Flora of silky sharks, thresher sharks, and mobula rays. Last year, Samoa led the push to protect blue sharks under the Convention on the Conservation of Highly Migratory Species of Wild Animals 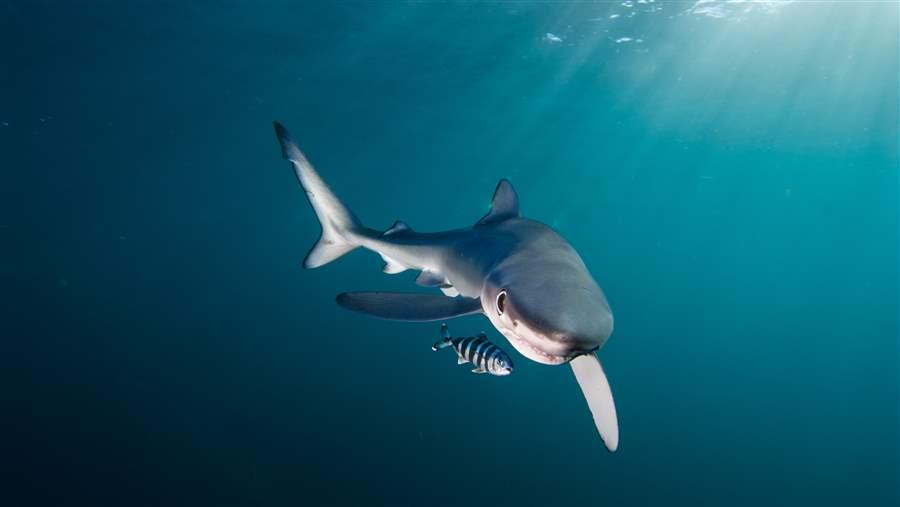 Samoa was a lead proponent in the successful effort to list blue sharks under the Convention on the Conservation of Highly Migratory Species in 2017.

“As Pacific Ocean stewards, it is our duty to protect them, and by doing this we are also protecting the livelihoods of our people,” said Prime Minister Malielegaoi. “Samoa has therefore joined the positions of other shark conservation Pacific islands by designating our national waters a shark sanctuary, safe for all sharks and rays.”