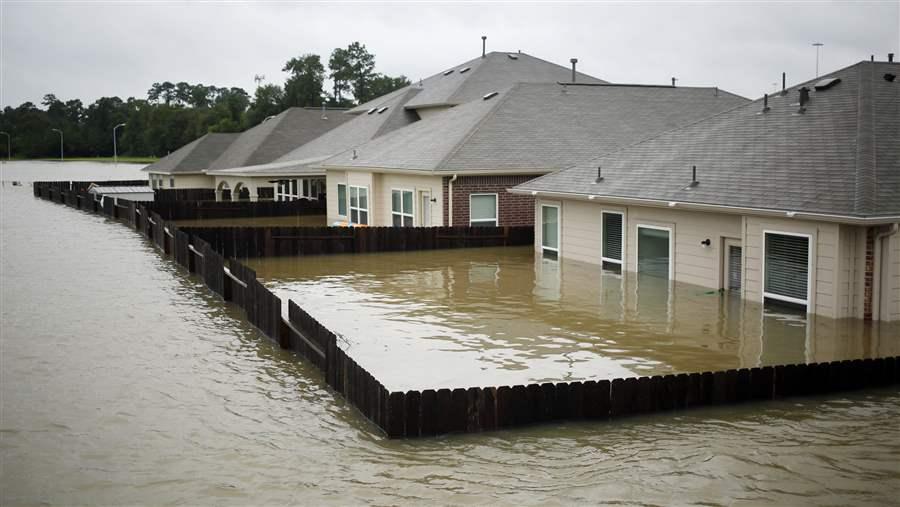 Floodwaters from Hurricane Harvey inundated the Highland Glen subdivision in Spring, Texas, on Aug. 28. A new survey finds that more than 7 in 10 registered voters across the U.S. support policies that will enable communities and the nation to better prepare for and respond to floods.

Note: This page was updated on Feb. 12, 2018, to include details about a webinar that discussed the poll results.

More than 7 in 10 registered voters across the U.S. support policies that will enable communities and the nation to better prepare for and respond to floods, according to a survey released Feb. 1.

The poll, conducted by the research firm Public Opinion Strategies for The Pew Charitable Trusts, found that a vast majority of voters across the political spectrum support policies aimed at reducing the risk posed by flood-related disasters, including requirements that have a potential cost impact. Additionally, the survey tested voter attitudes in areas of seven states that were affected by major flood events in 2017—Alabama, Florida, Georgia, Louisiana, Mississippi, South Carolina, and Texas—and found that “storm-affected” respondents support implementing these policies even though they could be directly impacted.

Among other key findings:

Nearly 9 out of 10 voters support so-called flood-ready building, which would require that federally financed infrastructure in flood-prone areas be built to better withstand the impacts of flooding. That percentage is up 7 points from the 82 percent of voters who supported this proposal last year.

86 percent of national respondents and those in states affected by hurricanes support a single, national standard for property sellers to disclose past flooding during a sale, up from 81 percent last year.

More than 72 percent support requiring people to pay more for flood insurance if they live in a community with repeatedly flooded properties and that community does not make investments to reduce the risk of flood damage. This marks an increase from 64 percent last year.

The poll found overwhelming support—85 percent—for the Federal Emergency Management Agency to offer low-interest loans to state governments to be used to help reduce the risk of flooding, such as by elevating homes, schools, or hospitals, turning repeatedly flooded areas into parks or open space, or improving storm drainage systems.

76 percent support requiring that the amount of federal funding states receive to rebuild infrastructure after a flood be dependent on these areas taking proactive steps toward mitigation before a disaster occurs. States that engage in activities that reduce risks and lower recovery costs, such as establishing a disaster savings fund or stronger land-use codes, would receive more rebuilding funds. States that do less would receive less.

The survey comes on the heels of debates in Congress about the looming expiration of the National Flood Insurance Program, infrastructure reform, and additional disaster funding for states affected by the 2017 hurricanes. When asked about federal recovery assistance in the survey, 79 percent support the government requiring stricter standards for rebuilding, even if it raises the cost. Support is just as strong in counties that experienced the 2017 hurricanes or storms, at 83 percent. A majority of these voters (52 percent) strongly support this requirement, while a mere 15 percent oppose it.

The message from this poll is clear: The American public supports improved flood policies, and that sentiment holds across political party and geographic lines.

Laura Lightbody, director of The Pew Charitable Trusts’ flood-prepared communities initiative, hosted a webinar Feb. 1 with Lori Weigel and Bill McInturff of Public Opinion Strategies (POS), discussing the results of a poll conducted by POS in January that shows support increasing for a number of policy proposals to reform how the nation addresses the impacts of storms and flood damage. Watch the webinar, with slides, here.