More than half of states have rebuilt their rainy day funds since the Great Recession, but fewer have been able to match the total balances they had on hand before the downturn. At the close of fiscal year 2017, total balances in states’ general fund budgets—including rainy day funds—could run government operations for a median of 29.3 days, still less than the median of 41.3 days in fiscal 2007.

Despite a tight budget year that saw several states tapping their reserves, 26 states ended fiscal 2017 with larger rainy day funds as a share of operating costs than before the recession. But most states’ budgets still had a smaller financial cushion overall. Only 14 states could cover more days’ worth of operating costs than in fiscal 2007 with their total balances, counting money saved in rainy day reserves plus general fund ending balances, which are the amounts left at the end of the budget year in what functions as a state’s main checking account.

After tax revenue plunged in the 2007-09 downturn, states tapped both their savings and ending balances to help plug huge gaps that opened in their budgets. As state revenue has slowly recovered, so have reserves and balances—largely because policymakers have made efforts to set aside more money in state rainy day funds over the past eight years of economic recovery. The median number of days’ worth of spending held in these dedicated reserves has risen each year since fiscal 2011.

Conversely, states’ total balances have improved since their low point in fiscal 2009 but have been more volatile. Thirty-five states ended fiscal 2017 with a smaller total financial cushion than a year earlier, also pulling down the 50-state median. This follows two years of slow and uneven tax revenue growth that left less money in many states’ ending balances and led several to tap rainy day funds to address shortfalls. 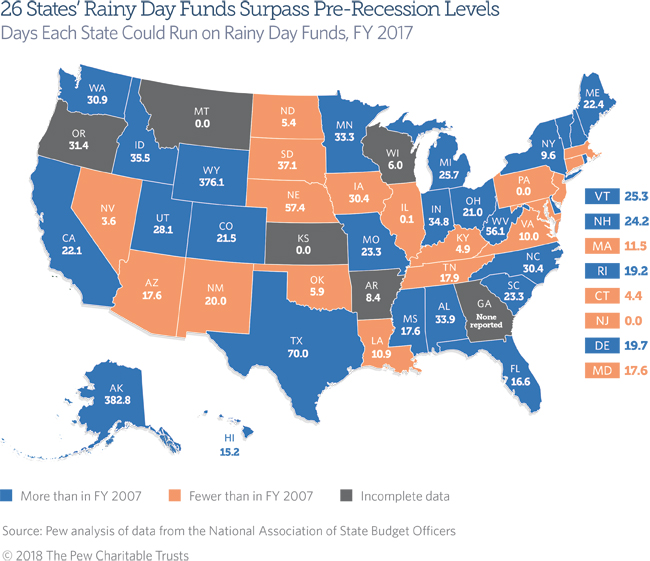 Reserves in rainy day funds—also called budget stabilization funds—were the largest component of states’ financial cushions in fiscal 2017, accounting for more than $2 of every $3 of total balances. The importance of rainy day funds in helping to gird against budget uncertainties has grown since the recession.

Nationally, rainy day funds held $49.6 billion in fiscal 2017—more than before the recession in both nominal dollars and as a share of government expenditures, according to data collected by the National Association of State Budget Officers (NASBO). States had set aside enough in these funds to run operations for a median of 19.8 days in fiscal 2017, or 5.4 percent of general fund spending—more than a median of 16.6 days, or 4.6 percent of spending in fiscal 2007. The median ticked up from a year earlier despite sizeable withdrawals in Alaska and North Dakota that decreased the total dollars held in reserves nationwide.

Since the Great Recession, most states—even those not yet back to pre-recession levels—have been rebuilding their rainy day funds, as they did after the 2001 recession. However, a number have struggled to save given sluggish tax revenue growth. For example, New Jersey drained its rainy day fund in fiscal 2009 to help ease the budget crunch it faced as a result of the recession and has not managed to replenish it at all since then.

Other states have had to make more recent withdrawals.  Twelve states reported lower rainy day fund balances in fiscal 2017 than the year before, according to NASBO. North Dakota recorded the largest drop in the number of days’ worth of expenses held in reserves after drawing down almost its entire savings to cover a budget gap caused by low oil prices. It held just 5.4 days’ worth of expenditures in its rainy day fund at the end of fiscal 2017 compared with 69.4 days in the preceding year.

In response to budget pressures, 11 states anticipate withdrawing from rainy day funds under budget plans enacted for fiscal 2018, which ends in June for most states. However, expected reserve balances are based on budget projections and can differ by the close of the fiscal year. 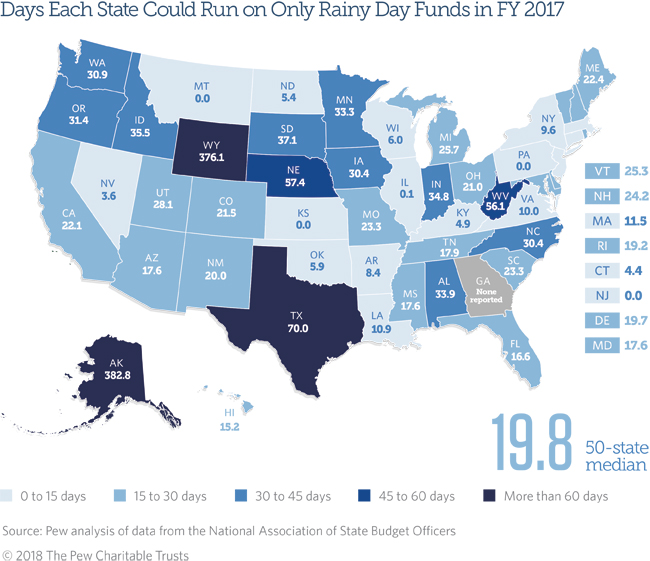 States’ latest results for fiscal 2017—though still subject to change—show: 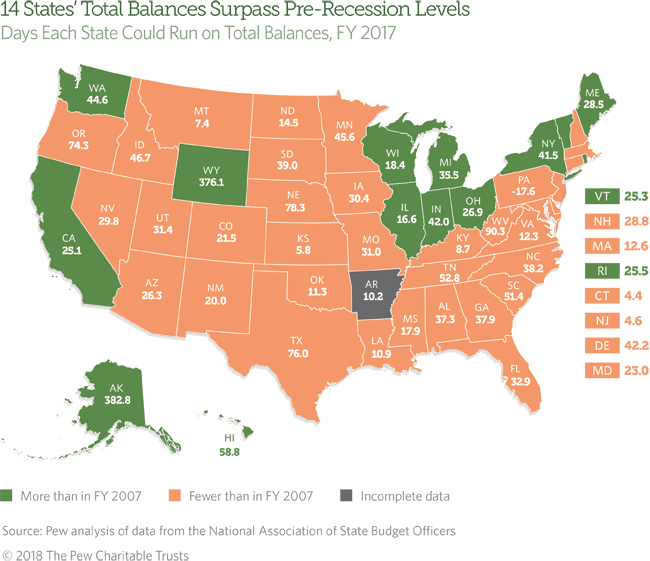 States’ total balances stood at $71.9 billion in fiscal 2017, and they held enough funds to cover operating expenditures for a median of 29.3 days. This amounted to 8 percent of spending, less than the fiscal 2007 median of 41.3 days, or 11.3 percent. But for many states, even pre-recession total balances were inadequate to plug budget gaps that opened as a result of the Great Recession.

Just 14 states’ total balances provided a larger financial cushion than before the recession. The total amount held nationally dipped from $81.5 billion a year earlier, as the median number of days that states could operate on these balances dropped to its lowest level in three years. Budget pressures, including weak tax revenues, have reduced the funds left over at the close of the past couple of budget years, limiting the contribution of ending balances to states’ total reserves. For example, although Texas has one of the largest rainy day funds, its total balance shrank from the year before as it experienced especially large declines in ending balances amid a revenue slowdown.

Since ending balances vary from year to year depending on how much revenue is left after spending needs are met, policymakers cannot count on them as cushions against future emergencies to the degree they can with rainy day funds. Still, ending balances can be available for a state to use in a budget crunch and provide an additional source of fiscal flexibility. According to NASBO, Alaska, Connecticut, and Pennsylvania reported negative ending balances for fiscal 2017, an indication that each needed to fill a revenue shortfall at the close of the budget year.

Enacted budgets for fiscal 2018 show that at least 30 states anticipated having fewer days’ worth of expenditures in their total balances than in fiscal 2017. Those balances, however, are based on amounts appropriated in state budgets and they usually change significantly by the close of the fiscal year. 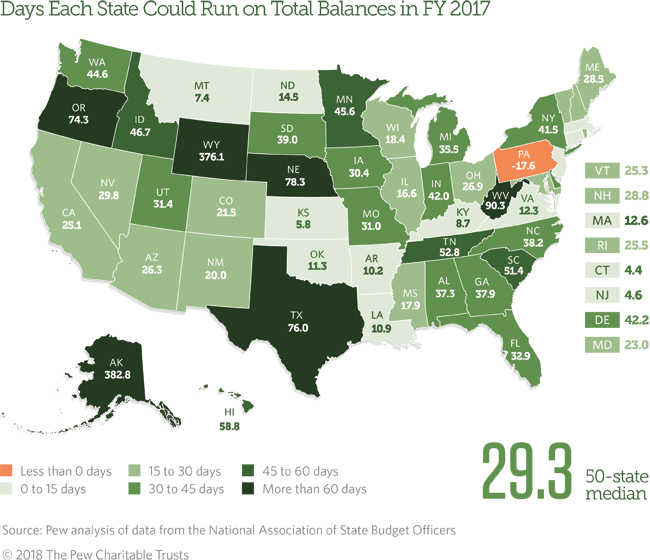 States’ latest results for fiscal 2017—though still subject to change—show:

States use reserves and balances to manage budgetary uncertainty, deal with revenue forecasting errors, prevent severe spending cuts or tax increases when there are unexpected revenue shortfalls, and cope with unforeseen emergencies. Because reserves and balances are vital to managing unexpected changes and maintaining fiscal health, their levels are tracked closely by bond rating agencies. For example, S&P Global Ratings downgraded Massachusetts’ debt rating in June 2017, citing its “failure to follow through on rebuilding its reserves.”

Building up reserves is a sign of fiscal recovery, but there is no one-size-fits-all rule on when, how, and how much to save. States with a history of significant revenue or economic volatility may desire larger cushions. According to a December 2015 report by The Pew Charitable Trusts, the optimal savings target of state rainy day funds depends on three factors: the defined purpose of funds, the volatility of a state’s tax revenue, and the level of coverage—similar to an insurance policy—that the state seeks to provide for its budget.

General fund reserves and balances may not reflect a state’s complete fiscal cushion. States may have additional resources to soften downturns, such as dedicated reserves outside of their general funds or rainy day accounts. In addition, some states undertake considerable spending outside of the general fund, so comparisons across states should be made with caution. One way to standardize the size of reserves and balances is to calculate how many days a state could run solely on those funds, even though it is highly unlikely that would ever happen.