One of the longest U.S. economic expansions has lifted personal income in all states above pre-recession levels. But growth has varied, ranging from a constant annual rate of 0.5 percent in Connecticut to 4.0 percent in North Dakota. In 18 states, personal income fell over the year ending in the third quarter of 2017 as U.S. growth remained slow—less than one-fifth the rate seen three years earlier.

Since the recession began, national economic growth, as measured by personal income, has been lower than its historical pace. Estimated U.S. personal income increased by the equivalent of 1.6 percent a year from the fourth quarter of 2007 through the third quarter of 2017, compared with the equivalent of 2.6 percent a year over the past 30 years, after accounting for inflation.

States have recovered at different paces. Only in mid-2015 did the final state—Nevada—recoup its personal income losses and return to its 2007 pre-recession level, after accounting for inflation. Since the end of 2007, personal income in 17 states has grown faster than that of the nation as a whole.

Looking at recent trends, inflation-adjusted U.S. personal income grew by a slim 0.8 percent in the third quarter of 2017 from a year earlier, compared with a peak of 4.7 percent at the end of 2014. These results are based on estimates and subject to revision, as is Pew’s ranking of growth rates for state personal income.

Focusing on earnings by industry, lingering weakness in farming was the biggest drag on national growth over the year, edging out manufacturing. In the decade since the recession began, manufacturing has been the leading detractor from national growth. Health care and social assistance made the largest positive contribution to growth over the year and since the recession began. Economists predict federal tax reform will boost U.S. economic growth in 2018.

Personal income estimates are widely used to track state economic trends. The statewide sum should not be used to describe trends for individuals and households. Trends in personal income matter to state governments because tax revenue and spending demands may rise or fall along with residents’ incomes. Comprising far more than simply employees’ wages, the measure sums up all sorts of income received by state residents, such as earnings from owning a business or investing, as well as benefits provided by employers or the government. 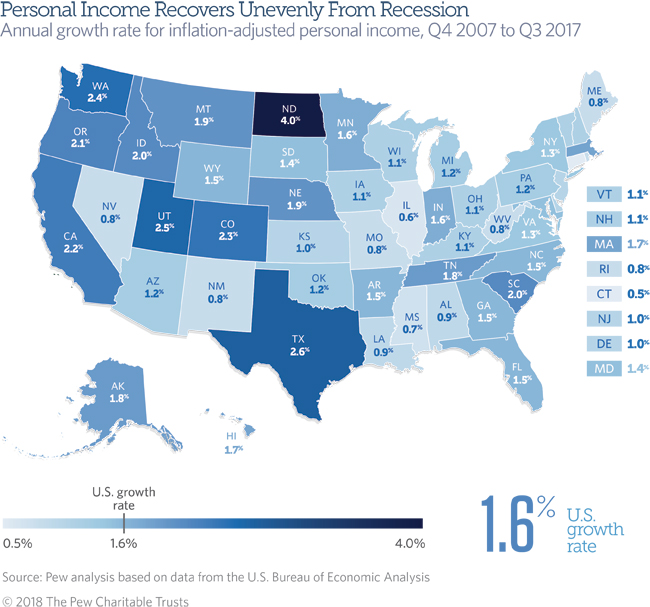 Trends in personal income from the recession’s onset in 2007 through the third quarter of 2017: 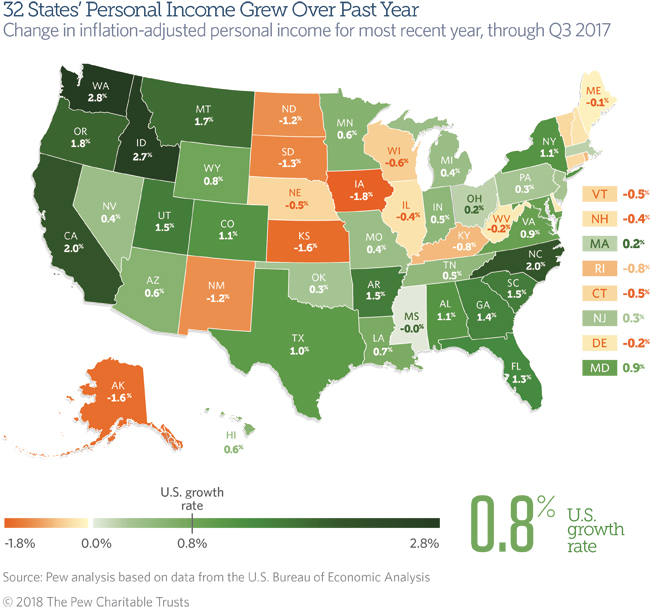 Trends in personal income for the third quarter of 2017, compared with a year earlier:

Looking at personal income per capita or state gross domestic product, which measures the value of all goods and services produced within a state, can yield different insights on state economies. So can looking at household data, which are based on a different measure of income.

Download the data to see state-by-state growth rates for personal income from 2007 through the third quarter of 2017. Visit Pew’s interactive resource Fiscal 50: State Trends and Analysis to sort and analyze data for other indicators of state fiscal health.